I have a cylindrical container say of some base area $A$. The atmospheric pressure is $P_0$. The cylinder is moved at an acceleration $a$ horizontally right. I need to find which base would have to face more internal pressure. The cylinder is filled with some ideal gas.

My intuition, even though I doubt it, says that in the frame of the cylinder the fictitious forces act towards left, so it should be the left face.

What is going wrong? P.S. just give me a hint. 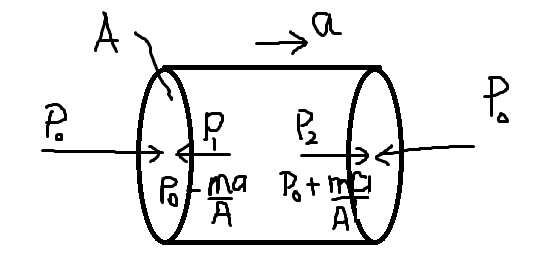 Firstly, as Peter mentioned, your equations implicitly assume that the fluid inside is causing the acceleration. Otherwise you need to specify that the system is being pulled. I'll deal with both situations here.

If the water causes the acceleration

Unfortunately, we can't directly deal with the individual cylinder caps because the cylinder tube exerts a force on them. Whenever you have a body, if you want to consider a part of it as a system you need to consider internal forces as well.

From this we can easily tell that $p_2>p_1$ as acceleration is towards the right.

In retrospect, this is obvious, as the fluid is making the cylinder accelerate to the right -- it needs to exert more pressure on the right wall outwards for this effect to take place.

If the cylinder is being pulled

In such a case, you will be pulling it with a force $F=(m_{cyl}+m_{fluid})a$ (as this is the only unbalanced horizontal force on the object.

Where does this pressure gradient come from? The acceleration. It's the same thing that creates a gradient in water in the presence of gravity. If you move to the accelerating frame, the pseudo force is just like a gravitational force acting to the left, and it creates the required gradient (force/pressure are frame-invariant, so a gradient in the accelerated frame persists in the static frame).

See the cylinder as a whole object . The second law of motion gives that the cylinder does not accelerate untill it have a net external force.

So, the external pressures on both sides of the cylinder is not equal.The external agent which accelerates the cylinder applies force ($ma$) on left face towards right so that pressure on left fave exeeds by a amount $ma/A$ by right face pressure. 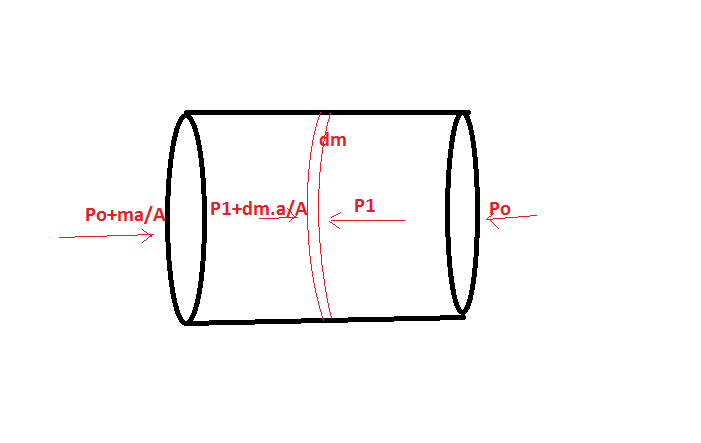 Now you can find P_1 and then presuure at any distance.

Not the answer you're looking for? Browse other questions tagged homework-and-exercises newtonian-mechanics forces pressure or ask your own question.

3
Is this the correct way to I combine multiple interdependant pressure readings?
0
How to find the force due to fluid pressure over a surface?
4
How to move a bubble which is trapped by the capillary pressure?
0
Atmospheric pressure In FBD doubt
0
geometrical stress dependence for a solid cylidrical body subjected to a uniform pressure load?
1
What is the “pressure on a point” precise definition?
1
Stress in a cylinder with no internal pressure
0
Confusion with pressure