Is this called multilayers pulley? [closed]

Ask Question
Asked 2 months ago
Active 2 months ago
Viewed 61 times
0
$\begingroup$
Closed. This question needs to be more focused. It is not currently accepting answers.

Is the B pulley in this picture called "multi layer" or "stacked" pulley? What is it look like in real life? In this problem, which circle is counted as its size? Is it the one attached to strings (red arrow) or the most outside circle (blue arrow)?

I am not sure to say whether this is called a 'multi-layer pulley'. But as you can see there are only three pulleys labelled as 'A','B' and 'C' in this figure. Probably, pulley 'B' consists of two disks welded together.

And I am here trying to answer your second question.

...which circle is counted as its size?

This question shouldn't be asked. First you need to understand why pulley 'B' rotates faster than the others. Yes, it is because it is the smallest pulley here, somehow. Let's look at this more scientifically. For simplicity, consider the system that contains pulleys 'A' and 'B'. The velocity of any point of the string which connect these two pulleys should be a constant. Let it be $v$. And the points on the pulleys where they touch the string have this $v$ velocity. It means that the points on the circumferences of the circles has $v$ velocity. The question asks 'what pulley rotates fast?'. In other words, 'which pulley has the maximum angular velocity?'. As $v=\omega r$, $\omega \propto\frac{1}{r}$,when $v$ is constant. It means the circle which has the minimum radius, rotates faster. It is literally pleasing to say, 'smallest circle rotates fastest'.

Thus here as an answer to your question, you can assume that the smaller circle is counted as pulley's size. It is because the rope is attached to the smaller circle(as you say). But it is meaningless to say that.

This image was found on wikipedia: 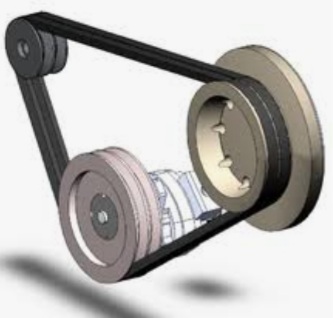 Regarding your image, I suppose there should be two slots, excluding large circle, as two belts are attached.

Not the answer you're looking for? Browse other questions tagged homework-and-exercises newtonian-mechanics terminology string or ask your own question.

2
Interaction between an ideal pulley and an ideal rope
6
How do we prove the downwards force of a massless rope on a pulley it wraps around is $2T$?
0
Real Pulley and Newton's Third Law
0
What are the forces acting on this car?
0
A confusion in string connected to movable pulley
0
The meaning of "being mounted in horizontal frictionless bearings"