How does a simple pendulum gain its acceleration?

The following diagram shows the direction of the acceleration of a pendulum at different states. 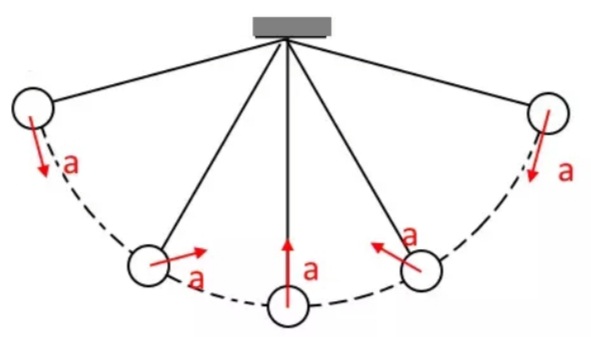 Also, consider the below diagram. It shows the state before the pendulum starts simple harmonic motion.

In this situation, a horizontal force is exerted on the bob in addition to the tension by the string and its weight and also it is in rest. According to the theorem of the parallelogram of forces, the resultant of $T$ and $mg$ acts horizontally along the opposite direction of $F$. Just after $F$ is removed, the net force on the bob should act along the horizontal axis. According to $\vec F=m\vec a$, the initial acceleration should be along the horizontal axis. But this idea contrasts with the first diagram mentioned above.

In my opinion, if the bob moves a little bit ahead horizontally, the string will loosen and there will be no tension. So it will gain a downward acceleration caused by its weight. When it tries to go down the string tightens again and tension arises. So the direction of the net force is changed again with the direction of acceleration. This is unnoticeable in comparison with time. But I am still not sure about this. Please help me for a better solution.

The force F, which you have drawn horizontally, could actually have been drawn in a number of different directions, including the direction opposing the starting acceleration.

At all times the tension in the string will automatically adjust to keep the total force zero. When F ceases the tension changes to the appropriate value and the mass begins to move.

You explained it almost correctly in your last paragraph. I'm elaborating it to explain exactly what happens when $F$ is removed.

Right after $F$ was removed, $T$ changes to $T'$. This happens because the bob starts to move under the influence of $T_h$ which immediately loosens the string.

Like $T$, the new tension, $T'$, is there only because of the fixed-length-property of the string fixed at one end (barring very little stretchability that generates the tension), i.e. because of the constraints that the length of the string cannot change and the other end of the string cannot move in the direction of the force. Hence, $T'$ automatically becomes equal to whatever force is trying to lengthen the string, which is $mg\cos{\theta}$. So, we have this now:$$ T' = mg\cos{\theta} $$ After all this, there still remains a force that is not counter-balanced - $mg\sin{\theta}$. Hence, this is the force $(mg\sin{\theta})$ that causes the acceleration of the bob. At any point in the journey of the bob, $T'$ keeps adjusting itself by becoming equal to $mg\cos{\theta}$ simply because the length of the string can't change. And, hence there is always $mg\sin{\theta}$ left to cause acceleration.

Since $\theta$ keeps on changing, both the direction and magnitude of the net acceleration keep on changing during the journey.

You are comparing two different situations.

But if the the bob is swinging freely, then at the extreme point of each swing we have $T=mg \cos \theta$ because the bob is accelerating tangentially, so the net radial force on it is zero.

Not the answer you're looking for? Browse other questions tagged newtonian-mechanics forces acceleration harmonic-oscillator or ask your own question.

-2
How to know when to divide what components and equate them in dynamics of circular motion?