How do Bitter magnets work (compared to a standard wound coil)?

How does a Bitter magnet differ in its construction from a simple wound coil magnet?

A Bitter magnet is made from a stack of plates with holes in a helical arrangement separated by insulators. The idea is to get a helical flow of current so similar to a coil.

Each plate acts as roughly a single turn carrying a massive current but the current flow is apparently non-linear. So this must result in some changes to the simplified solenoid equations normally used. What are they?

Superconducting magnets do not seem to be based on the Bitter design. Why not? Couldn't the plates be made of superconductors instead of conductors? Is there a requirement for them to have some resistance? Or is it simply that plates are need to hold a massive current in a resistor and not in a superconductor, which seems like the obvious conclusion.

I also note (slightly off-topic) that because these are made of plates rather than windings they look much easier to construct and ripe for mass production yet the opposite seems true https://www.youtube.com/watch?v=tBz6jVC-Gg4 There is surely no shortage of demand given applications like NMR imaging. What am I missing?

There was a similar question here:

How to design a Bitter electromagnet?

It was closed as being about the design. I think this was wrong as you need to understand the physical principles involved in order to construct one.

The short answer is that electromagnets are limited in the total field they can create by overheating. Overheating is dealt with by cooling. You can flow water over the outside of coils to cool them, but then they get hot in the middle and melt. For traditional wire-wound electromagnets you can use hollow wire and flow chilled water at high pressure to cool the electromagnets. This has a few problems. 1) for long wires, the water may have heated up substantially by the time it reaches the end of the electromagnet so it doesn't cool as efficiently. 2) high pressure is required to flow water at high velocity for efficient cooling. 3) A blockage, which is likely in the narrow piping, bricks the entire electromagnet.

Bitter coils get around these problems. The idea with bitter coils is to have a way to flow water in a way such that it flows through all of the volume of the coils (so that there are no hot pockets), but it never has to flow a very long path before returning (so you don't have pressure problems). You want cooling water current which is massively parallel through the coils despite electric current being serial. 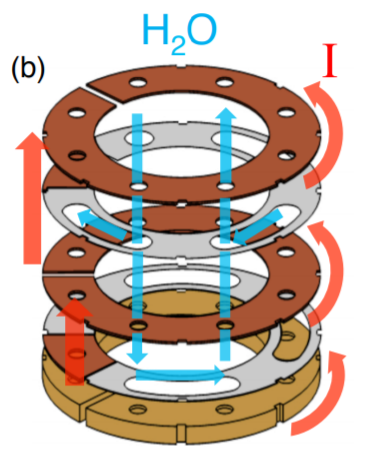 Image from https://arxiv.org/abs/1309.5330. We see water flows in some holes and other others and current flows in a spiral along the sheets.

Why are they designed and manufactured with these sheets? That is just the easiest way to get the appropriate pattern of conductors and insulators so that electrical and water currents flow in the right patterns. It could equivalently be made with additive manufacturing techniques such as 3D printing and sintering but this would probably be much more difficult.

Superconducting magnets: Frankly, I know very little about superconducting magnets. What I do know is that superconducting magnets are a little bit of a different beast because, so long as the magnets are cold enough to be superconducting, the current doesn't actually generate any heat because there is zero resistance. I think this changes the design tradeoffs because you don't need to worry about hot pockets appearing within the meat of the electromagnets that you can't cool. And in fact, you may not want to give up precious volume for current to flow in. That said, maybe a bitter design would make it easier to reach and maintain superconducting temperatures in the first place. There could also be an issue with finite resistance occurring at the physical interface between two separate pieces of superconducting material that ruins the design, but this is 100% speculative, I don't know if such an effect is real.

Not the answer you're looking for? Browse other questions tagged electromagnetism superconductivity or ask your own question.

1
How to design a Bitter electromagnet?