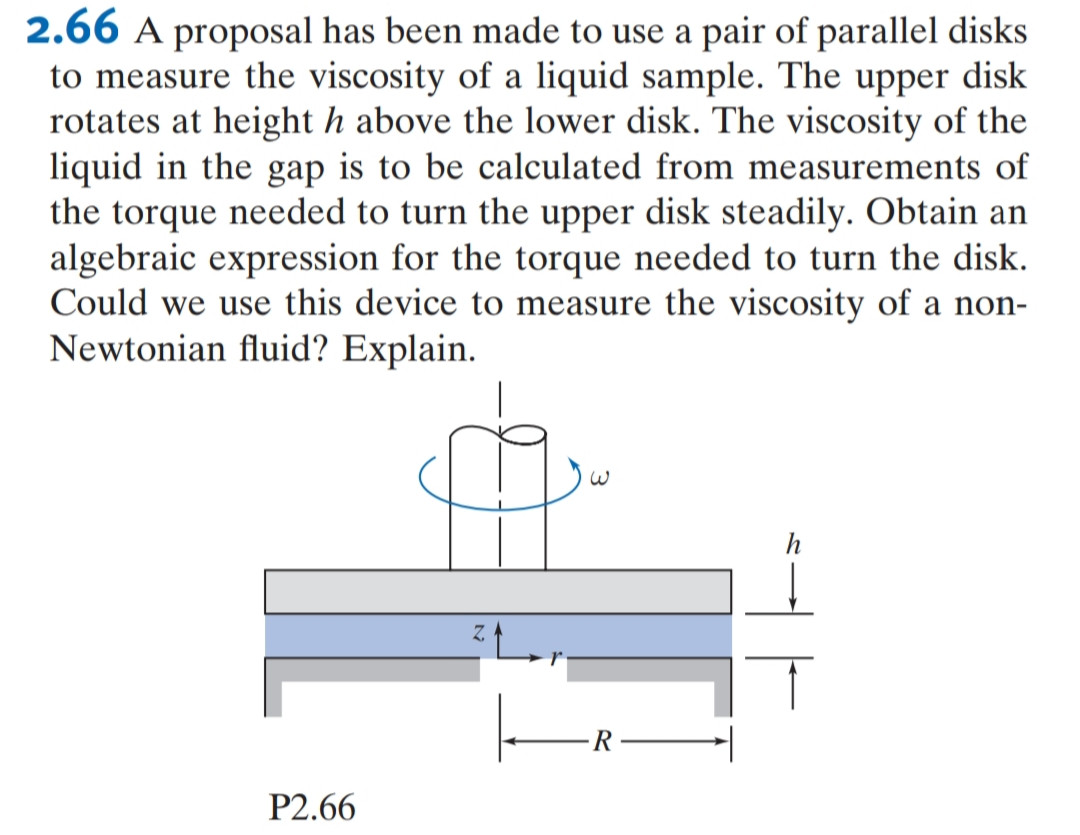 Hi , My instructor solved this problem using a circular elemental strip of thickness 'dr'. He told me we get only shear stress in horizontal layers of fluid. He used Newton's law of viscosity to get the value of shear stress at top face of plate. The Newton's law of viscosity is only applied between two plates where there is velocity gradient. But we are also observing linear profile of velocity on the top face of plate. Here my doubt is why can't we apply Newton's law of viscosity for this circular strip? That is, in a circular strip we have a number of layers of fluid with different velocities. So there is velocity gradient between them. But shear stress between is not calculated between layers? Is there no relative motion between those cylinderical fluid layers? What goes wrong in assuming it? Also this problem is solved example in other textbook on fluid mechanics. In that example too they didn't consider shear stress between cylinderical fluid surfaces. I am studying this course for first time. Can anyone please explain elaborately.. Thank you

Edit: I am adding images of how i solved it . So it will avoid any confusion present in my text 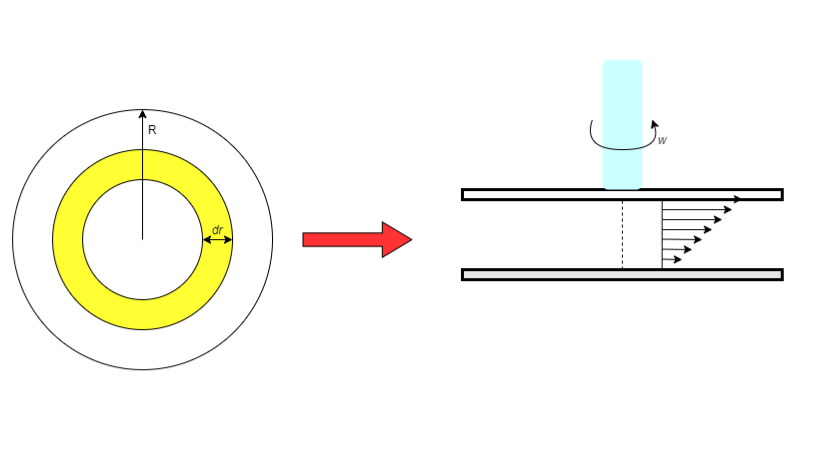 And the below image is the actual doubt 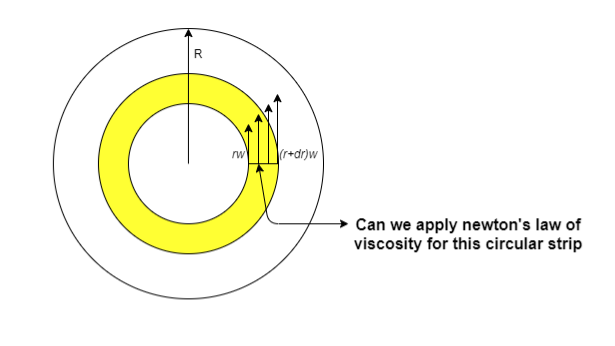 The viscosity is defined as:

and the distance is $r$, so the shear rate in the horizontal is simply:

Now consider the change in velocity with distance as we move vertically. The bottom plate is fixed, while at a distance $r$ from the axis the top plate is moving with a velocity $v = r\omega$, and the thickness of the liquid layer is $h$ so the shear rate in the vertical direction is:

So the ratio of the two shear rates is:

Viscometers are constructed so that the thickness of the liquid layer $h$ is much less than the radius of the plate, so that means $\dot\gamma_v \gg \dot\gamma_h$ and therefore the force we have to apply is dominated by $\dot\gamma_v$.

Note that commercial viscometers do not use parallel plates because the shear rate in the vertical direction changes with $r$. Instead they use a cone and plate geometry. See for example this answer.

Not the answer you're looking for? Browse other questions tagged viscosity or ask your own question.

1
how the form factor (stress - torque) is derived?

3
In the classic viscosity definition, why does doubling the plate gap cause the force to halve (intuitive)?
0
Viscous forces with asymmetric gradient velocity in fluid mechanics
2
Why does viscosity effect the normal component of stress in a Newtonian fluid?
3
Stressing Over Stress Tensor Symmetry in the Navier-Stokes Equations
0
Is the velocity gradient of a homogeneous viscous fluid constant?
0
Time scale for steady flow to occur in parallel disk viscometer
0
Ellis's viscosity law: Demostration
1
How does Newtonian viscosity not depend on depth?
0
How does fluid viscosity determine viscous friction between fluid and the moving plate?