Why does the transverse Alfven mode not undergo wave steepening and hence resulting in shock waves?

I am currently working through the second edition of Introduction to Plasma Physics by Donald A. Gurnett & A. Bhattacharjee

However, they then state, for the transverse Alfven mode (this is again obtained from section 6.5):

...On the other hand, the transverse Alfvén mode, which is linked to the intermediate shock, does not tend to steepen, since the phase velocity, which is determined by the zero-order background magnetic field, is independent of the magnetic field perturbation..

Indeed, since $V_A$ is a function of $B_0$, the phase velocity does not constitute the perturbation $B_1$.

Going back to the first glance

But take a look at equations (6.5.17) and (6.5.19) describing the slow and fast magnetosonic modes, they also do NOT contain the perturbation terms since both $V_A$ and $V_s$ are functions of the zero order terms $B_0$ and $P_0$ respectively. Furthermore, if we read their first statement again:

Suddenly this doesn't make sense, because the phase velocities of the slow and fast magnetosonic modes do not contain the perturbation term.

Apologies for the long question, hopefully it is clear enough.

From trying to understand honeste_vivere's answer in the comments, I would try to paraphrase it in my own words.

Consider the eigenvectors of the transverse Alfven mode: 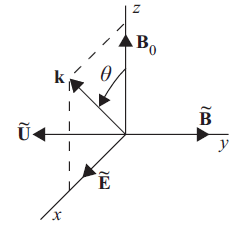 From the diagram above, it is clear that the perturbations are transverse with respect to the wave propagation, this implies that there is no compression and rarefaction and hence no wave steepening.

Hence this must mean that the phase velocity of the transverse Alfven mode solely relies on the initial magnetic field $B_0$ since the perturbations cannot cause wave steepening. Therefore shockwaves CANNOT occur in the Alfven mode.

Let us now consider the slow and fast magnetosonic modes, the eigenvectors are given by: 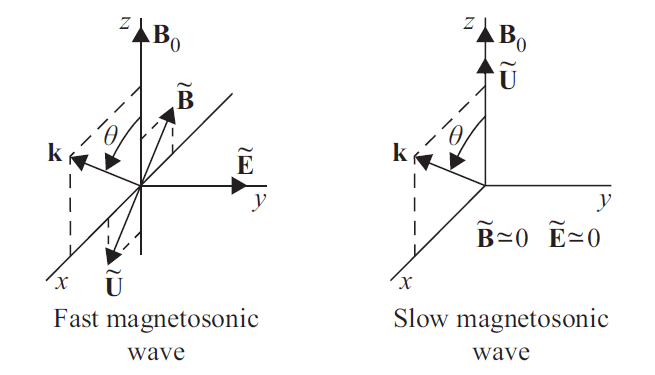 For the fast magnetosonic wave, because $\theta$ is arbitrary, there is a non - zero projection of the fluid and magnetic field perturbations on the wave propagation vector, that is, $\mathbf{k} \cdot \tilde{\mathbf{B}} \neq 0$ and $\mathbf{k} \cdot \tilde{\mathbf{U}} \neq 0$. This allows for the existence of BOTH longitudinal and transverse components of the magnetic field and fluid velocity perturbations. The longitudinal component cause compressions and rarefactions and eventually wave steepening if the rarefactions overtake the compressions.

Similarly, for the slow magnetosonic wave, even though there is no magnetic perturbation, there is still a fluid velocity perturbation $\tilde{\mathbf{U}}$ which causes the same compressions and rarefactions that result in wave steepening.

Why does the transverse Alfven mode not undergo wave steepening and hence resulting in shock waves?

Because it is a transverse oscillation. Nonlinear steepening happens in longitudinal oscillations. As long as the Alfven mode remains transverse, it cannot steepen.

Look at your Equation 6.5.18. If you apply the variational principle to the right-hand side, it will go to zero. In the linear, transverse limit, the Alfven mode is just a transverse oscillation, i.e., $\mathbf{k} \cdot \delta \mathbf{E} = 0$ and $\mathbf{k} \cdot \delta \mathbf{B} = 0$ (technically the latter is always true owing to there being no magnetic monopoles).

Not the answer you're looking for? Browse other questions tagged fluid-dynamics plasma-physics shock-waves magnetohydrodynamics or ask your own question.

4
Shock-waves, Bangs and the Speed of Sound
3
Finding turbulent velocity Fourier mode amplitudes from kinetic energy spectrum
2
How can pressure and velocity fluctuations in acoustic plane waves be in phase and still hold to the B.C. that velocity must be zero at a solid wall?
2
Can't prove that Fast Magnetosonic Wave's proper speed is given by the following formula
0
What is the relationship between the velocity of a wave source and the amplitude of a shock wave?
1
What's the difference between shock waves and acoustic waves?