Trying to determine how much weight a post can support without necking when a monitor is attached to an articulated arm: a cantilever problem.

There are three objects involved in this problem:

The articulated arm has: 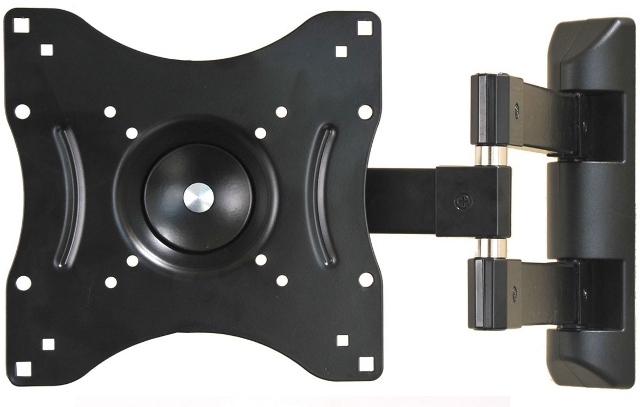 An engineer from the pole's manufacturer said that the pole will not support the weight without necking. This conclusion was reached before the engineer knew any of the weights or measurements involved.

The objective is to attach the articulated arm to the bracket attached to the pole. This will either be accomplished using four bolts on the plate, or having the two plates welded together.

You have 3 obvious weak points in the system.

1 Arm - bracket I'm going to assume you'll be able to make this bracket strong enough. If you need to check, you just need to balance moments: $M = x * \sigma * A_{bolts}$

2 Bracket attachment to pole This is the most difficult calculation and I'm not sure if it's possible to solve analytically. It also depends critically on the details of the attachment bracket.

The moment in the pole is $M$. This is constant through the length of the pole (assuming pole is perpendicular to the arm) from the attachment point to the base. I'm assuming the top of the pole is unattached to anything.

This moment cause a compressive force along the front of the pole. With a wide, thin-walled pole the most likely failure will be by buckling. The calculations for buckling are difficult and often not possible to solve analytically - normally FEA would be used instead.

This is compounded by the second load on the pole. The moment is conveyed to the pole via the attachment bracket, pulling on the top of the bracket and pushing at the bottom. This means we have a (large) compressive force applied to the front of the pole at the bottom of the bracket - at the point that is already under compression due to the moment. This compressive force would eventually cause failure by buckling the pole at this point.

So the attachment to the pole will fail by causing the pole to buckle under the bottom of the bracket. Calculating the force to do this is very difficult (probably requires FEA) and depends on the precise details of the pole and the bracket itself.

Conclusion It's going to be difficult (but certainly not impossible) to make the attachments strong enough, due to $L$ being much bigger than $x$, and $W$ being large. Having said that, decent bolts should be plenty strong enough.

The thing that'll be difficult to calculate is the weight required to caused buckling of the pole. Since buckling is a sudden failure (switching from one stability mode to another), you won't get much warning of this before failure, so it's difficult to predict just from suck-it-and-see (i.e. it'll be fine, right up to the point where it smashes through your desk).

If I were going to try this I'd probably try to get an identical pole & bracket and test to destruction. Much more fun, too! Failing that, you might get somewhere by seeing how steady it looks with the monitor not extended too far... (though watch out for sudden failure as above!).

You can mitigate the buckling effect by:

UPDATE I've just looked in a bit more detail at the picture of the bracket itself, and I've realised that's another weak point ...! The bracket appears to be made of a few fairly thin sheets of metal, joined by small bolts (in sliding joints). This isn't designed to carry a large moment (monitor on long arm). I'd expect the sliding joints to slide, and wouldn't be surprised if the bracket itself were to buckle and collapse. Also the height of the bracket is quite small, meaning the forces applied to the pole (to transmit the moment) are large.

Given that, my next recommendation would be to build a new bracket! You've talked about welding some pieces together already, so I'm guessing this should be possible for you. Design a new bracket that is explicitly designed to carry a large moment, and to attach to the specific arm that you have.

Hope this helps. Key thing with all this waffle from me is it's just some general ideas without knowing the full details of the system. I may be being pessimistic about the properties of the system, but without seeing the thing for real it's impossible to say. I just hope I've given you some appropriate things to consider.

I used to make robotic hands and the main problem always was the torque generated by the end load.

At the end of this arm you have an extremely heavy TV, which increases the force on the poor little column the farther away it is. Since, torque is proportional to the radius. For a small radius the bolts will tolerate it quite well, but there will be a point where the torque exceeds the manufacturers limits of the force per unit cross sectional area (i.e. pressure) of the pole that will lead to the necking...

You can actually find this out by using the shear modulus and calculating the amount of weight $m_{\text{TV}}g$ times the perpendicular distance $r$ of the pole to the pole. Using the radius of the bolts you will get something like

Since, you already know the max pressure you don't have to worry about anything. Just use,

The result would be the maximum radius possible for your TV without buckling.

That aside, what I would do to prevent necking is either get a thicker pole (too expensive) or get another pole and bind it with the first one (just make sure that the restraints for the arm reach around them both. This is crucial) and then ground it firmly with the first one on a broad base (making sure the entire thing doesn't tip over either).

This will work because you've essentially increased the crossectional area of the poll. Kinda like the old stories about how sticks that stick together are harder to break. If this still doesn't work then add a 2 more poles and interlock them with restraints on a broad base. Do note that if I were you I would give em a nice weld and turn this into an awesome home DIY project. So, take everything with a grain of salt.

I think that should solve your problem.

Not the answer you're looking for? Browse other questions tagged classical-mechanics mathematical-physics forces equilibrium mass or ask your own question.

2
Stress vs Strain for mild steel
3
Tensile strength of a braided steel wire vs. a solid steel bar?
1
Why does the mass on the cart-pole have to fall?
3
Reaction forces in pyramid stacking of steel coils
2
Shape of an elastic steel ruler bent between 3 pins
16
Why doesn't a table tennis ball float on a surface of steel balls? How do we calculate buoyancy here?
1
Can I calculate tension in a preloaded string by superposition when the string is deformed?
0
How to calculate the # of steel wires required to prevent rupture of stacked, wired units