My argument is, who are we to say what is fictitious or not. The object at the non-inertial frame really feels the centrifugal force! So, it is a real force for the object.

So, is it really right to call centrifugal force fictitious just because it doesn't exist in an inertial reference frame?

I disagree that you feel centrifugal force. A person in a centrifuge actually feels their reaction to the centripetal force. If you sit in a car that is subject to harsh acceleration, you 'feel' as if you are being pushed back in your seat. There is no force pushing you back- it is simply the result of your inertia.

The first law states that an object at rest will stay at rest, and an object in motion will stay in motion unless acted on by a net external force.

Mathematically, this is equivalent to saying that if the net force on an object is zero, then the velocity of the object is constant. $$\sum \mathbf F=0\iff \frac{d\mathbf v}{dt}=0$$

You could call the first law a 'test' for the remaining two laws; if the first law doesn't hold you can't apply the other two. For example in a rotating reference frame an inertial path could look like the left picture: 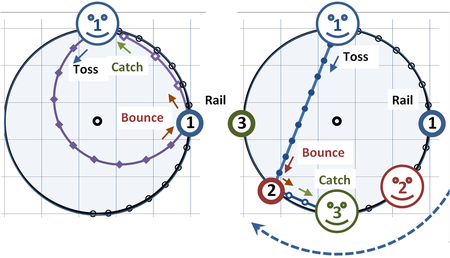 The ball is obviously accelerating but there doesn't seem to be anything causing the force. You have two options in this situation. You could argue there is no force on the ball (I don't see anything causing a force!) and in that case Newton's first law would be violated because the ball is still accelerating. You could also argue that there is a force on the ball defined by $\mathbf F\equiv m\, \mathbf a$. In that case Newton's third law would be violated because there is no second force that is equal and opposite to $\mathbf F$. This violates momentum conservation and we have no choice but to call this force fictitious. Either way we conclude our reference frame is non-inertial.

Fictitious forces have plagued classical physics for a long time and they have only been resolved after the introduction of general relativity.

According to the basic Newtonian formulation of mechanics, "real" forces come in couples: a force (action) and its reaction acting on the source of the action. Furthermore "real" forces are independent of the used reference frame. Fictitious forces, as centrifugal or Coriolis one, violate both conditions. This is the reason why they are called in that way. Maybe that is not a good name because they have concrete effects (though the interpretation of these effects may be given without using fictitious forces by just describing the phenomenon in an inertial reference frame).

The object at the non-inertial frame really feels the centrifugal force! So, it is a real force for the object.

This is actually incorrect. An accelerometer mounted on the object detects only the sum of the real forces. There is no experiment by which you can “feel” any fictitious force. They only exist in non-inertial frames and their existence or non-existence does not change the result of any physical measurement.

The distinction between inertial forces and real forces is physical, not merely a labeling reflecting some human prejudice.

"Fictitious" is a loaded term. It is better to use the alternative terms "pseudo force" or "inertial force", which avoid implying that the force is not real. Whichever label is used the key point is that centrifugal force (and, similarly, Euler force and Coriolis force) arises purely from the fact that we are measuring the position, velocity and acceleration of the object relative to a non-inertial reference frame.

Without arguing why something is called something, I'll just give the justification for calling something, something.

Whenever a force emerges due to our choice of a non-inertial frame, it's called a fictitious force.

Consider as an example a person on an upward accelerating lift. If the person relies on his own frame, then he should write the equation of motion as $$-mg+N=ma=0$$ But this is wrong! Because the person is in a non-inertial frame. He must take this into account. There are two ways of doing this. First, he could analyze the problem from an inertial frame. In which case, he would write $$-mg+N=ma_\text{lift}$$ Or, he could introduce a force for which he has no reason. It's not from some sort of interaction of bodies such as gravitational or electrostatic forces. It's just a force out of nowhere. We call it a fictitious force. We write: $$-mg+N-ma_\text{lift}=0$$ Now, this is exactly the same as what is done in the initial frame.

In exactly this sense, the centrifugal force is fictitious.

the object feels there is a radially outward force

No, it does not, and this is the whole reason behind the misconception.

A human may feel this way, but this is a thing that goes on in your head, and simply means that we are not wired in a way that we can really process the forces at play in a meaningful way on a biological level - mostly because it never happens in real life, so there is no selector for evolution to develop it.

Tie a rope to a large rock and twirl it around you (in free space with no planet close by, to avoid any confusion with its gravity). Cut the rope with one fell swoop. In this moment, no more forces act on the rock. The rock does not fly radially away from you; it flies away tangentially to the circle it just described. There was no real force pointing away from you.

You can easily test this in your garden, or from your armchair by watching a hammer throw in slow motion. Note how the athletes keep rotating a quarter turn after letting go, before following the flying object with their eyes.

While the rock was still bound, there acted exactly one force on it: the force of the rope pulling straight towards you; or from the perspective of the rock, towards its "bottom" (i.e. the centripetal force - from latin "pedes: on foot", like in "pedestrian"). While rotating around you, at each moment it had a speed tangential to its circle or orbit; and the centripetal force is the one that makes it "fall" towards you, or in more neutral terms, constantly changes its direction.

In the case of a solid rotating object, the rope is replaced by the electromagnetic forces that keep the particles together. In the case of an object standing on a planet, the rope is replaced by gravity. Oh, and a fun thought experiment: if someone would switch off gravity right now, on Earth, and a totally inelastic object were sitting on a completely inelastic floor (i.e., with no internal "spring" forces in the picture), and maybe in a local vacuum, it would seem to start flying parallel to the floor, not towards the sky.

The illusion of the centrifugal force is common to us and created by our brain; for example if you sit in a car and go fast around a corner, your head seems to move towards the side of the car. This is not the case though. Your head wants to go straight ahead; the side of your car is moving centripetally and thus pushing on your head if you relax your muscles enough that your head rests against the side.

"The object at the non-inertial frame really feels the centrifugal force! So, it is a real force for the object."

Three points on this:

So, is it really right to call centrifugal force fictitious just because it doesn't exist in an inertial reference frame?

Reactive centrifugal force (or whatever term you want to call it) is real and part of a pair of Newton third law forces. Consider a puck sliding on a frictionless surface, being centripetally accelerated in a circular path by an attached string that goes through a hole in the center of the circular path. The string exerts a centripetal force on the puck, coexistent with the puck exerting a reactive centrifugal force on the string.

As for the person in a centrifuge example, imagine the person is holding a brick against their stomach. The person will feel the reactive centrifugal force from the brick, coexistent with the centripetal force that the person exerts onto the brick.

Imagine standing on a train where the floor is made of ice. The train is parked at the station. You are standing on the ice floor of the train, holding onto nothing. There are other passengers seated on the train.

As the train pulls out of the station, you stay in place inertially, because the ice provides no shear force to your feet due to a lack of friction. To a passenger sitting down, he looks at you accelerating towards the rear of the train and remarks, "Wow, there is a lot of force acting on that guy!" Upon close examination, however, the passenger notes the ice floor and realizes there is no such force to explain your rearward acceleration. The passenger concludes that this apparent force is fictitious and that they are instead simply making observations from a non-inertial frame.

According to Einstein's Special Relativity postulates, neither of their labeling systems are superior. They both work equally well.

In the case of inertial versus non-inertial frame, it's still not quite correct to say that one is "right". Both of them have valid coordinate systems, and they have physical laws that predict phenomena. However, the non-inertial physics is more complicated.

Since it's good to have a universal set a of physical rules rather than having different rules depending on what frame of reference one chooses, and there is an objective basis on which we can say that the inertial frame, while not necessarily more "right", is more useful, it makes sense to formulate physics laws in terms of inertial frames, and that means having the word "force" refer to forces that exist in inertial frames, and adding the qualifier "fictitious" to phenomena that appear only in non-inertial frames.

The answer depends on the particular meaning that one puts in word fictitious:

Not the answer you're looking for? Browse other questions tagged newtonian-mechanics reference-frames terminology inertial-frames centrifugal-force or ask your own question.

81
Does centrifugal force exist?
23
Is the centrifugal force a real force?
4
Confusion with certain aspects of the Equivalence Principle
5
What makes the inertial reference frames special?
3
Are fictitious forces still necessary in general relativity?