What happens to an electron if given quantized energy to jump to a full orbital?

What would happen if enough energy was given for one electron in the $1s$ orbital to jump to the $2s$ orbital (i.e. exactly the $\Delta E$ between $1s$ and $2s$ was supplied)?

Transitions to other unoccupied states are possible but extremely unlikely, more likely that the photon will not be absorbed.

Other answers here have stated that the transition to other energy levels is forbidden. Now while the probability of a transition is extremely small, it is non-zero.

A quick note on notation: I will be using a bold typeface for vectors as opposed to an over arrow so that vector operators are clearer.

Quantisation of the Electromagnetic Field

Minimal coupling of the electron to the electromagnetic field using the Coulomb potential adds a perturbation of:

to the Hamiltonian. Where $e$ and $m_e$ are the charge and mass of the electron, $\hat{\boldsymbol p}$ is the momentum operator acting on the electron and the vector potential operator has the form:

If we have a single wavelength and polarisation then:

Then using first-order time-dependent perturbation theory which holds in the limit $\frac{t}{\hbar}\left|\langle f|\hat V|i\rangle\right|\ll1$ for all $n\ge2$. We find the probability of a transition having occured if the atom is measured after a time $t$ since the electromagentic field was applied is:

where $\Delta E=\hbar \Delta \omega$ be the difference in the energy levels of the initial $|i\rangle$ and final $|f\rangle$ states. This is in general non-zero even when $\Delta \omega\ne\omega$. However, we can make one more approximation to aid in understanding: if the final state $|f\rangle$ has absorbed a photon then in the limit $t\Delta\omega\gg2\pi$ the $\operatorname{sinc}$ functions do not overlap and so we need only retain the absorption term:

Further approximations from here will give you Fermi's Golden rule, one of these approximations is taking the limit such that $t\operatorname{sinc}^2$ tends to a delta function and so removes the possibility for a transition when the energy of the photon is not exactly equal to the energy gap: and so this is an inappropriate approximation to make in this case.

The energy may be transferred to or from the measurement device or surroundings to compensate.

In previous edits this section also contained a discussion of the many-words type interpretation which in my naivety I included. I apologise for anyone I have mislead and for more details you can see this question:

"Conservation of energy, or lack thereof," in quantum mechanics

@Jagerber48's answer is the most relevant to this question giving additional details that will likely be of interest to any reader of this question.
@benrg's answer gives a good explanation of why energy is conserved.
@NiharKarve's comment includes a blog post which explains why the paper may be misleading.

Putting this all Together

Equation (1) shows, in general, the when an atom is illuminated by light of a single specific wavelength and polarisation, a transition is possible even if the energy of the photons is not equal to the energy gap, which would violate energy conservation (but this is allowed); however, the probability is extremely small.

Equation (2) makes a further approximation which we can now use to find an expression for the probability:

As $|i\rangle\equiv|i\rangle_e|f\rangle_{EM}$ and $|f\rangle_e|f\rangle_{EM}$ where subscript $e$ is the electrons states and subscript $EM$ are the states of the electromagnetic field. Without detail $_e\langle f|\hat{\boldsymbol {p}}\cdot\boldsymbol s|i\rangle_e\equiv\boldsymbol d_{fi}\cdot\boldsymbol s$ where $\left\{\boldsymbol d_{fi}\right\}$ are the dipole matrix elements and are zero for transitions between certain orbitals independent of the energy supplied (for more details see selection rules). Finally, $_{EM}\langle f|\hat a|i\rangle_{EM}=\sqrt{N}$ if the state $|i\rangle_{EM}$ is the state for $N$ photons of the given wavelength and polarisation - but other states such as coherent states are also posible.

which holds in the limit:

As the limit $t\Delta\omega\gg2\pi$ is not needed when the state $|i\rangle_{EM}$ is the state for $N$ photons of the given wavelength and polarisation because the creation operator causes the emission term to vanish anyway. However, the time is of the order of $10^{-25}\text{s}$ give or take a few orders of magnitude for Neon (obtained using the only data I could find for reduced matrix elements for dipole transitions), which is not a practical time scale to measure on.

Finally, considering your given case, given selection rules, the most likely case if the $1s$ electron did absorb a photon is a transition to the $3p$ state (as $2p$ is occupied and $3s$ is forbidden to first order by selection rules). Substituting values into equation (3) gives an order of magnitude estimate for the probability of transitioning from $1s$ to $3p$ in Neon of $10^{-12}\%\text{ per }\left(\text{photon }m^{-3}\right)$ for $t=10^{-25}\text{s}$ which is the point the approximation of first order perturbation breaks down.

There are some good answers already, but I wanted to emphasize one more important point: There is actually no such a thing individual orbital energies in a multi-electron atom. So it does not even make sense to talk about the energy difference "$\Delta E$ between $1s$ and $2s$." The energy is the eigenvalue of the Hamiltonian for the entire system of interacting electrons.

The total energy includes electron-electron repulsion. Beyond the modifications to the potential felt by each individual electron, there are also more subtle effect, such as exchange energies, caused by the interplay of the electron-electron repulsion with the Pauli Exclusion Principle (although the exchange energies are not so important when the electron shells are filled). In general, these energy terms cannot be assigned to individual electrons—although approximations (like the Hartree approximation) that do assign each individual electron an "energy" can be extremely accurate under the right circumstances.

However, at a conceptual level, the question is really asking about what happens if the energy supplied to the atom is exactly the $\Delta E$ between the $1s^{2}2s^{2}2p^{6}$ state and the $1s^{1}2s^{3}2p^{6}$ state—except that the latter state does not exist, making this quantity undefined. This is actually a real practical problem for experimental tests of the Pauli Exclusion Principle that look for transitions to states with overfilled electron orbitals, because we do not have any reliable method for calculating the energies of the overfilled orbital states and must rely on some rather crude approximations.

A transition from $1s^2 2s^2 2p^6 \rightarrow 1s^1 2s^3 2p^6$ is forbidden because there is no such excited state in the anti-symmetric Hilbert space of 10 photons due to Pauli exclusion principle.

If the photon has energy $\Delta E$ equivalent to the energy difference between $1s$ and $2s$ then it is likely far detuned from other transitions. If we neglect all possible other excited state then in this situation absolutely nothing would happen. The atom would just pass by.

However, if we consider other states, such as $1s^1 2s^2 2p^6 3p^1$, we can now refer to the answer from @Chris Long. Even though the photon is probably very far detuned from this transition, there is still a small probability that the transition will be driven. The same statement is true for a range of other electronic energy states. These transitions are all driven off-resonantly so the probability of transition is very small.

But, in any case, the atom goes from being purely in the ground state, to being mostly in the ground state with small superposition components of various excited states. These small superposition components contribute to the total electron wavefunction slightly changing shape. The amount the shape changes decreases the further detuned we are. Normally this effect is neglected, but I raise it here because it allows us to recover our intuition that SOMETHING ought to happen when the electric field of the photon passes by the atom.

To say "nothing happens" is correct at the same level of approximation that it is correct that "a harmonic oscillator driven far off resonance undergoes no motion". 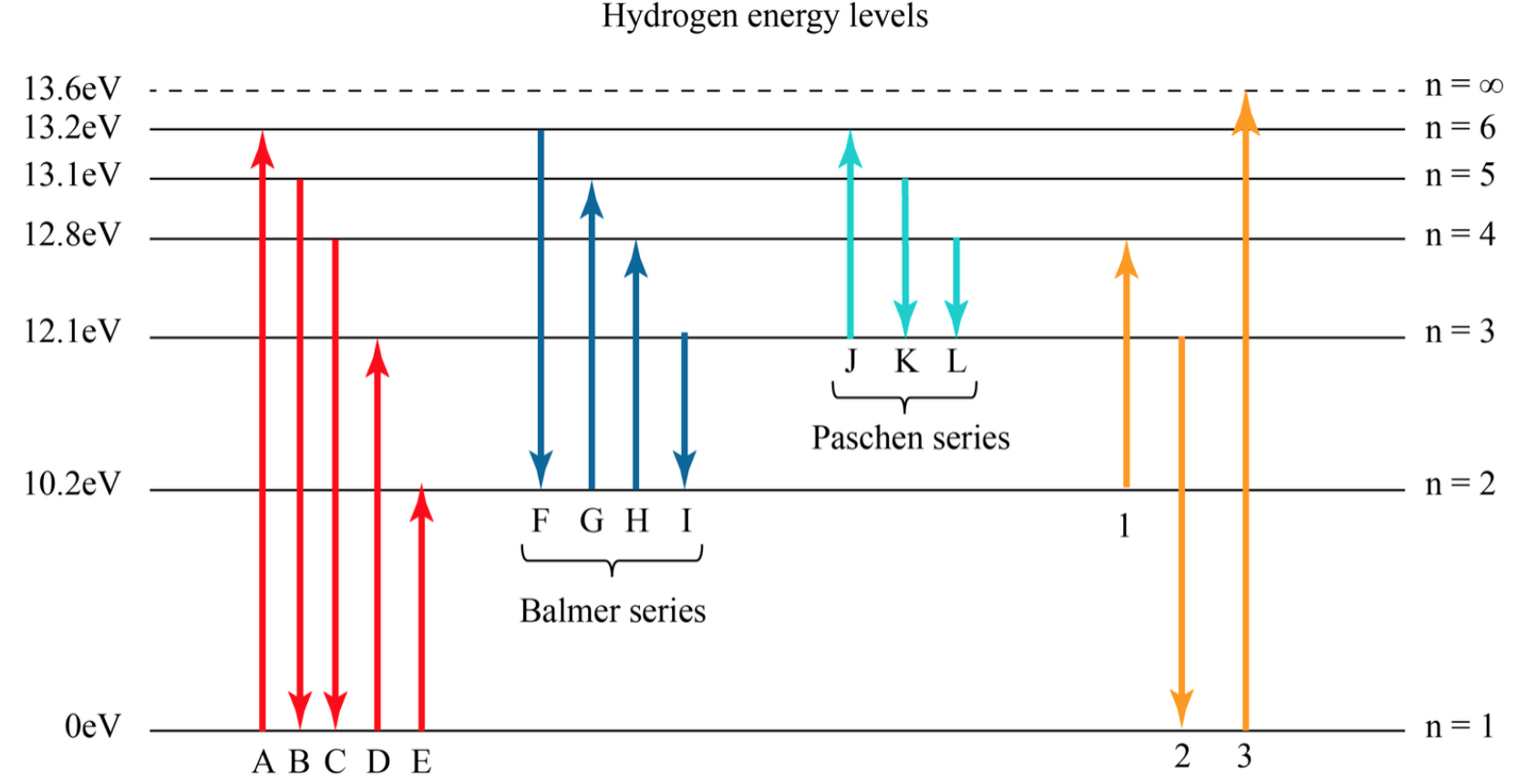 The $1s\rightarrow 2s$ photon in Hydrogen is 10 eV. If, instead of a $1s$ electron absorbing the photon, one of the $2s$ or $2p$ electrons absorbs the photon then those electrons will end up with ~20 eV of energy which exceeds the ionization threshold of 13.6 eV.

So in this case the system will evolve from the ground state into a superposition of ground state, ionized states, and (a very small component of) excited bound states. It's worth noting that while the excited bound state contribution will be small because of the large detuning, the probability of ionization may in fact be large.

To reinforce Ruslan's comment, and try to address the question without too much reference to full-up quantum complexity, the energy in question is the Kα energy, 848.6 eV. If, in an experiment, you illuminate neon with photons of that energy, the thing that you see is ionization. The ionization energy is only 21.6 eV. There is no spectroscopic absorption feature at the Kα energy, demonstrating that the atom in its ground state doesn't have any special tendency to be excited by that energy. The energy absorption increases above the K edge energy of 870 eV, when you have enough energy to remove a K shell electron.

8
"Conservation of energy, or lack thereof," in quantum mechanics

0
Do electrons collapse into nucleus, if electrons in the atom are constantly excited?
3
What happens when an atom absorb electron/photon?
4
Can an electron in an atom have insufficient energy to achieve an energy level, or orbital, and what happens to this electron when this occurs?
19
Can an electron jump to a higher energy level if the energy is insufficient or exceeds the $\Delta E$?
2
Orbitals and electron jumping
2
Absorbtion of photon
4
What does it mean to talk about electron's "orbital speed", quantum mechanically?
0
Can an electron absorb a photon even if it exceeds the energy required for the electron to jump up an energy level?
2
Does path of electron exist from one orbital to another?
0
During promotion of electron in $3p$ orbital before hybridisation, why does it get promoted to $3d$ orbital and not $4s$?