In most physics textbooks, the oscillating electric and magnetic fields generated by a moving photon are depicted as above.

I am having two fundamental problems with this picture.

The picture does not show the fields of a moving photon. There is no such entity in QED. There is a quantized field whose excited levels can be classified as photons. A coherent superposition of photons may result in a macroscopic electromagnetic field.

What that picture represents are the macroscopic electric and magnetic fields in a plane-wave solution of the classical Maxwell's equations. The picture requires careful interpretation. It is not a kind of snapshot of the spatial features of the electromagnetic wave. It should be interpreted as a 2D projection of a 3D plot representing the values of the ${\bf E}$ and the ${\bf B}$ fields as a function of the x coordinate in a linearly polarized plane wave. Such plane wave in 3D starts from $x=-\infty$ and arrives at $x=+\infty$. Vectors ${\bf E}$ and ${\bf B}$ are the same in every plane perpendicular to the $x-$axis, at every distance from the $x-$axis, while their size and orientation periodically vary as functions of $x$. A more faithful representation of the situation described by the plane wave field may be obtained from this Wikipedia image: 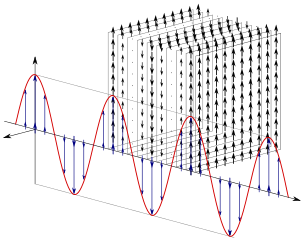 Of course, such an infinite object cannot exist. However, real electromagnetic waves can always be represented by a superposition of such unphysical building blocks (Fourier analysis).

There is no possibility of associating such a plane wave to a single photon. One reason is that there is an uncertainty relation between the phase and the number of photons. Therefore, if the number is well defined (one photon), there will be maximum uncertainty for the phase. The picture shows an oscillation with a well definite phase.

Not the answer you're looking for? Browse other questions tagged electromagnetism photons or ask your own question.