Why in the curved space-time, the double derivatives of the position vector is symmetric but any other vector is not symmetric?

The double derivatives of the position vector (see image eq. (1)), connecting the two points in a curved space-time defined by the Schwarzschild metric, are symmetric under no torsion condition. This symmetry of position vector leads to symmetry of basis vectors leading to the Christoffel symbol symmetry with respect to the lower two indices.

But double derivatives of any other vector are not symmetric (see image eq. (2)) as some of the Riemann curvature tensor components are not zero.

Is this because there is no appropriate geometrical framework to describe the curved space described by the Schwarzschild metric?

Kindly refer to the related question: 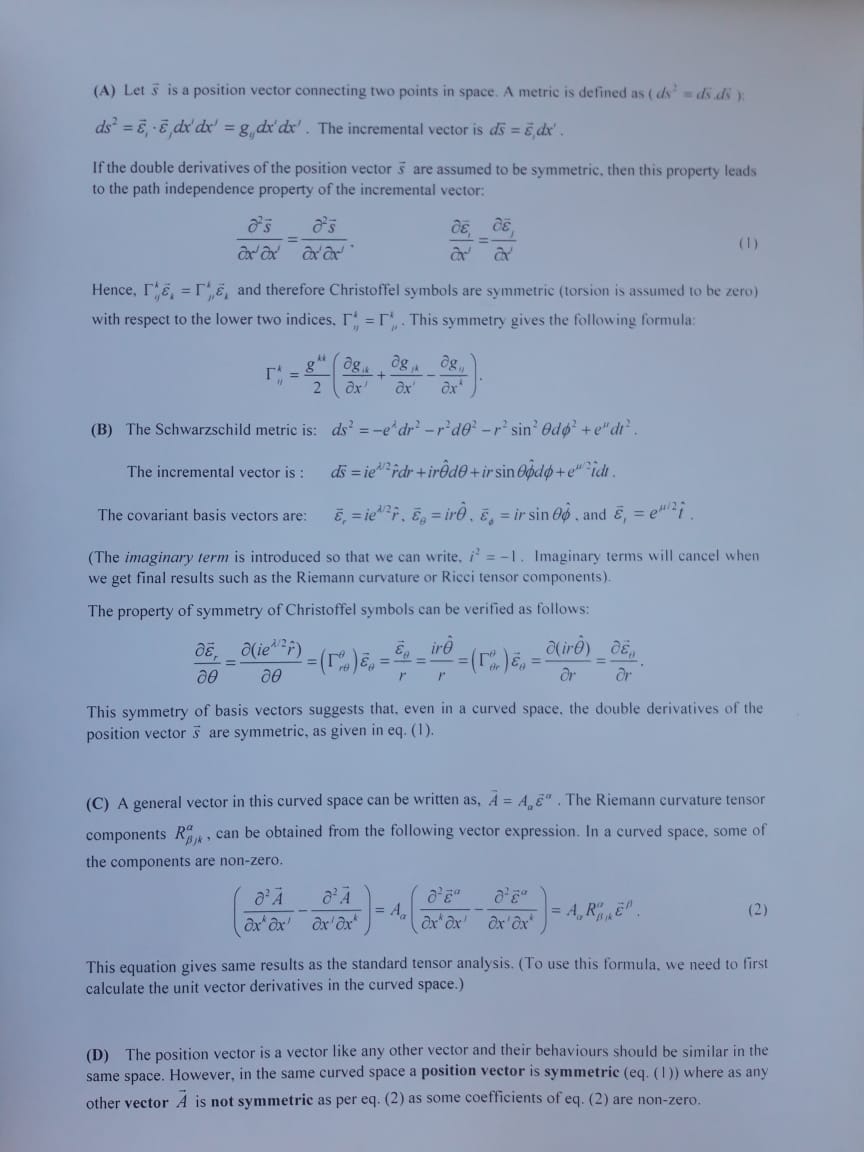 You have quite a few misconceptions.

There is no position vector on a manifold. Points can only be labeled by their coordinates and are not vectors. Instead, vectors are elements of the tangent space and the basis vectors are the partial derivatives along the coordinate lines: $$\mathbf{e}_i \equiv \frac{\partial}{\partial x^i}$$

For any two vector fields $\mathbf{u}$ and $\mathbf{v}$, we can define their Lie bracket $[\mathbf{u},\mathbf{v}]$ as $$[\mathbf{u},\mathbf{v}]^\mu = u^\nu \partial_\nu v^\mu - v^\nu \partial_\nu u^\mu$$ This measures how much the partial derivatives of the vector components fail to close. This derivative is not the same as the covariant derivative which measures parallel transport. A coordinate system always has $[\mathbf{e}_i , \mathbf{e}_j] =0$ because partial derivatives commute.

Hope this clears up some of your confusion.

Kindly refer to the earlier answer: There is no position vector on a manifold. Points can only be labelled by their coordinates and are not vectors. Instead, vectors are elements of the tangent space and the basis vectors are the partial derivatives along the coordinate lines.

I have tried to mathematically analyse the problem.

Therefore, the expressions of both the general incremental vector and the incremental distance vector satisfy same symmetry conditions in a flat space.

(b) In a curved space, an incremental vector of a general vector (eq. (4) in image) can be obtained by taking a covariant derivative of the vector.

But assumption of this symmetry of position vector cannot guarantee symmetry of double derivatives of a general vector. Therefore, some curvature tensor components are non-zero. 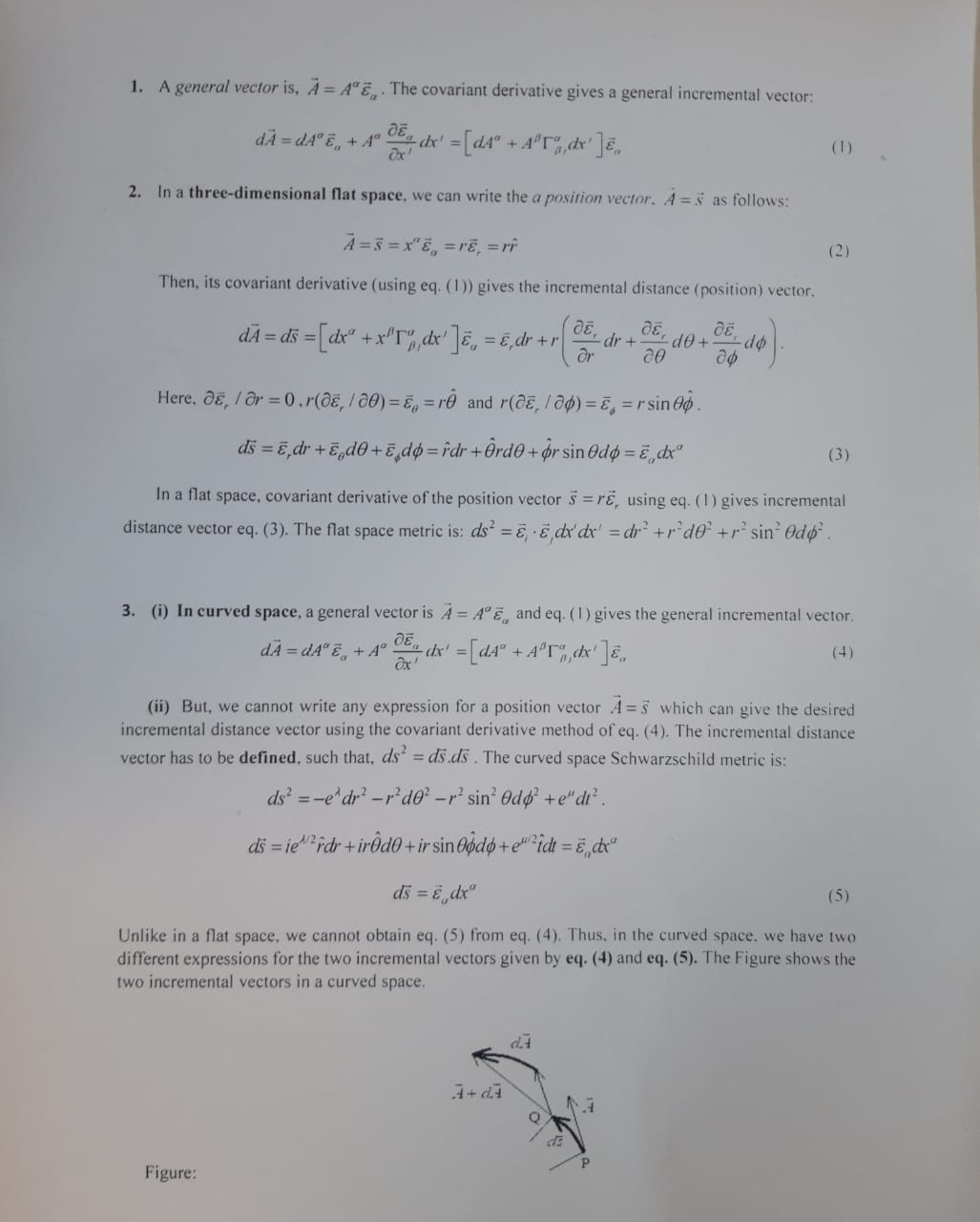 Based on the suggested material and text books, I feel that there is a fundamental difference in the concept of space in the classical physics and general relativity:

A. Space in Classical Physics: In a classical picture, space is supposed to be empty and therefore has no characteristics assigned to it. For explaining the force at a distance, the space is assumed to be filled with a conceptual material called the field.

It can be easier to study a spherical body in spherical coordinates system. However, we cannot write a curved path position vector between two points on the surface of a sphere, as the directions of angular unit vectors change along the path. But, we can always write and draw a geometrical picture of an incremental displacement (position) vector at any point on the sphere with the angular unit vectors. This incremental vector can give a metric corresponding to the sphere surface, in spherical coordinates.

Geometrical difficulties with a classical approach to the Schwarzschild metric analysis:

Even though, it is difficult to write a position vector, we can write an incremental displacement vector corresponding to the Schwarzschild metric. The classical approach gives the desired results of the planetary orbits, similar to the Schwarzschild solution of general relativity. Note, the physical nature of space is not expected to change in the classical approach but we may say that the coordinate system has become curved.

But, it becomes difficult to write the unit vectors and therefore suggest a geometrical picture of this coordinates system, even at any particular point in space. Also, the incremental displacement (position) vector and the incremental vector of any other vector have different symmetry properties, in the same space.

Instead, we can always obtain the desired planetary orbits in a three dimensional flat space analysis, by modifying the gravitational potential. Naturally, the above geometrical difficulties don’t arise.

B. Space in General Relativity: According to this theory, the physical nature of space itself changes and becomes curved around mass. The concept of a vector (Ref: Gravitation by Misner C. W., Thorne K. S and Wheeler J. A.) also changes. A vector like a position vector linking two events is no longer relevant. As mentioned in this text book: The old bilocal (“point for head and point for tail”) version of vector must be replaced by a purely local vector”. The tangent vector is a directional derivative using the affine parameter is constant along the given geodesic and the separation vector is a measure of separation between two nearby geodesics.

Conclusion: In a classical picture, the physical nature of space doesn’t change and we change the coordinate system, the metric and corresponding mathematics, to make the analysis easier. Therefore, the geometrical concerns (discussed above) become important, even though we can get desired results.

In general relativity, the space itself becomes curved around the mass. The corresponding changes in the mathematics and geometry are not by choice but due to the fact that the physical reality itself has changed. Therefore, the geometrical difficulties, mentioned in the classical picture corresponding to the Schwarzschild metric, actually become peculiar properties of the curved space-time. The mathematics and geometry automatically gets accordingly modified.

The GR needs to be studied keeping this physical change of space in view. The experimental support to aspects like time dilation recommends the GR view of space.

Not the answer you're looking for? Browse other questions tagged general-relativity differential-geometry metric-tensor symmetry vectors or ask your own question.

9
Energy-momentum tensor and covariant derivative
2
How to properly construct the electromagnetic tensor in curved space-time?
6
How to prove explicitly that by including Dirac fermions into the Einstein-Hilbert action we make torsion to be non-zero?
5
On the uniqueness of the Riemann-Christoffel tensor
7
Intuition for Interchange Symmetry of the Riemann Tensor
3
Torsion tensor in Relativity
0
Is it incorrect to assume the Christoffel symbol symmetry (with respect to the lower indices) for a curved space-time?
3
Torsion-free and compatible connection for non-symmetric non-degenerate $(0,2)$ tensor field?