So I would like to know the directions of friction acting on the man and the plank in the following situation:
The man walks on a rough plank (upper surface rough) kept on a smooth floor.

The actual question asked to find the signs of work done by the friction.
Seems like I was right about the friction on plank direction but then they gave the answer that work done by friction on man is negative which conveyed the message that friction acted backward on the man! Wouldn't this violate Newton's third law since both frictions act backward?

they gave the answer that work done by friction on man is negative which conveyed the message that friction acted backward on the man!

This is not correct. The friction force acts forwards on the man. Remember, work is force times displacement. So that just means that the displacement is backwards. This makes sense as the man’s foot will move backwards along with the board.

This confusion often stems from poor teaching about the work energy theorem where the “net work” is calculated as the product of the net force and the displacement of the center of mass. This “net work” is not the same as the work done by a given force or even the sum of the works of all forces. And it only reflects the change in kinetic energy, not the total change in energy. It is a rather limited concept that is easily over generalized or over emphasized in class.

No, it would not violate Newton's third law since even though the frictional force is acting along the same line of the man’s motion, it is opposite to the direction of motion of his feet.

With the presence of a frictional force, as the man attempts to push his feet in the backward direction, the friction acts in the opposite direction, therefore pushing him forward and the board backward (since it is in contact with a frictionless surface).

then they gave the answer that work done by friction on man is negative which conveyed the message that friction acted backward on the man!

This does not mean that "the friction acted backward on the man". This is incorrect. If we consider the work done then, $$W=\vec F_r \cdot\vec ds = F_r\times ds \times cos(180^o) = -F_rds$$ which is a negative number since $F_r$ and $ds$ are just the magnitudes of the force and displacement (with the board moving backward) respectively. 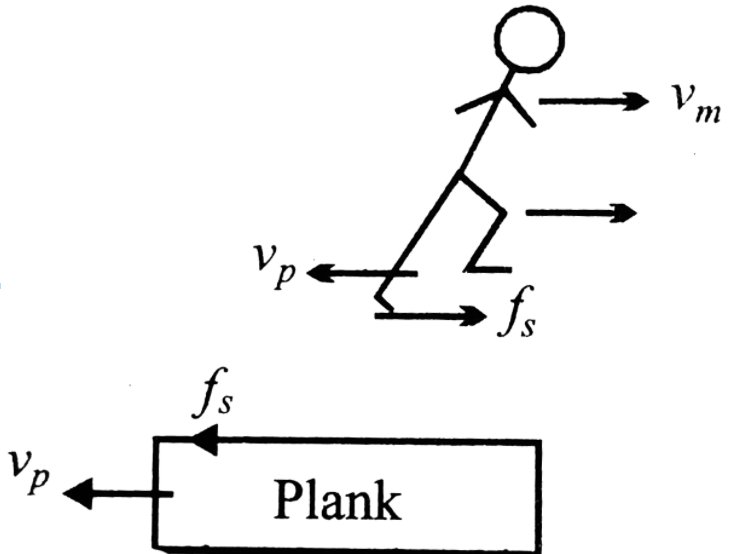 P.S - The work done by the friction from the plank frame of reference will be zero since the displacement of the point of contact w.r.t plank is zero.