If we shift vectors any which way in a Cartesian coordinate system, isn't the meaning of the vector changed?

According to 3Blue1Brown, as long as the magnitude and direction of a given vector are the same, even if we move it around in the Cartesian coordinate system, it is still the same vector. 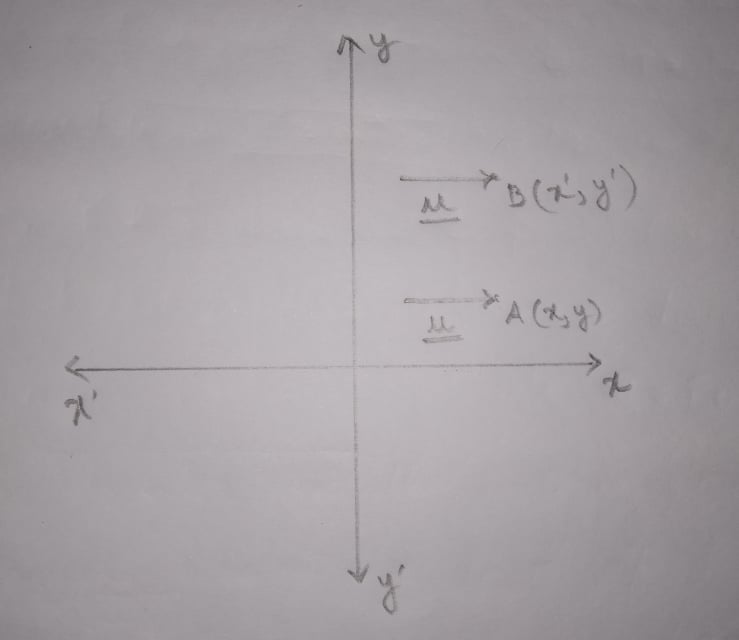 If two objects $P$ & $Q$ were at points $A$ & $B$, then shifting $\underline u$ from its initial position would change the meaning of the initial representation.

He wasn't talking in that sense. It just means that a vector is describe by an arrow in space that has a specific direction and a length. Now it doesn't matter if this arrow is moved around in space without changing its direction and length, It will still remain the same vector.

Now if you add a physical content to it.For example, Suppose $\vec{A}(x,y)$ describe a wind flow at point $(x,y)$. Now if we displace each point an amount of $(1,1,1)$, the vector field would change. Of course, the situation will be changed, Now the wind flow is incorrect. But again, the vector that was at some point $(x_0,y_0)$ will be the same vector that is at now $(x_0+1,y_0+1)$ in the sense that its length and direction is the same as before.

Edit: Although In physics, One might wanna categorize these cases. So one defines

Your concern about shifting vectors is well-founded. The problem originates in the sloppy introduction to vectors usually present in introductory physics courses. The video you refer to is not much different.

Let me start stressing where are the problems. From the mathematical point of view, the idea that a parallel shifted vector is the same vector would require identifying all the parallel shifted vectors. Missing that, there would be more than a neutral element or more than an additive inverse, contrary to simple theorems in linear algebra. However, such identification conflicts with some of the applications in physics. For example, when applying a force to a rigid body, the exact point of application matters, for the resulting motion. Therefore, a beginner may feel uneasy with such contradictions. Some partial solution may come from the introduction of qualified vectors (free vectors, localized vectors, sliding vectors, and so on). I never found such purely terminologic difference satisfying.

Actually, mathematicians have clearly identified two related but different sets. On the one side, vectors spaces, which, in 1,2 or 3 dimensions can be graphically represented by the set of all the arrows starting from a special point. On the other side, affine spaces, i.e. a space of points such that a vector is associated with every pair of points. An affine space behaves like a multi-origin vector space. Every statement about translations of vectors is actually a statement valid in an affine space. In this may, it is possible to clearly distinguish the so-called free and localized vectors.

Not the answer you're looking for? Browse other questions tagged coordinate-systems vectors geometry or ask your own question.

2
Combined Gravitational Force Vectors in a Spherical Coordinate System
4
A reference frame is any coordinate system or just a set of Cartesian axes?
2
Definition of Position Vectors
3
What is the significance of the zero vector?
0
Solution to Ideal Acceleration Pathfinding
4
Difference between a vector field and a force field
0
Does changing the angle of a pendulum also shift the coordinate plane w.r.t which we give rectangular components to the $mg$ vector?
0
Vectors and scalar product using the metric tensor - Coordinate transformation
1
Can someone help me understand polar coordinates 2D better?
1
Triangle law in forces