Would we even notice the merger with the Andromeda Galaxy?

When galaxies collide it is not that their stars crash into each other, because their individual cross-sections are extremely small when compared to the space between them. This is dealt with in qualitative terms on the Wikipedia page on the likely collision.

What will happen to the Earth when Milky Way and Andromeda merge?

All that being said, the effect would be order of magnitude smaller than the type of seismic events that happen on a daily basis, and would not pose any sort of threat to anything on Earth.

The first one says that the stars (solar systems) will hardly collide with each other. Now the second one says that the gravitational waves from the merger of the central black holes would be hardly detectable.

So basically, when this merger happens, assuming humanity is still here, and the Earth is still intact, would we even notice the merger? As far as I understand, the black holes would merge in seconds, but I do not know how long the full merger of the galaxies would last. Would we just simply see more stars moving fast in the night sky?

Would we even notice the merger with the Andromeda Galaxy?

The merger would be indirectly noticeable due to a dramatic burst of star formation and supernovas. The gas of the two galaxies will meet at high velocity, clump, and produce new stars. Some will be very heavy and bright, resulting in supernovas and gamma ray bursts: the merged galaxy may become a bit too risky for planet-bound civilizations dependent on an ozone layer. This is amplified by the possibility of gas accretion on the central black holes producing a luminous active galactic core. In the end these processes will tend to blow away much of the gas and end star formation, leaving us with a big elliptical galaxy.

Obviously the process itself stretches over hundreds of million years from start to finish of the final merge, so there would never be anything moving dramatically. The night sky would just keep on getting more complex and rich until the merger winds down.

A civilization observing the stars would likely figure out what is going on, especially by comparing to other galactic mergers.

Most likely nothing special will be seen from Earth within the lifetime of the Sun. The most recent results (see discussion in Will Milky way and Andromeda collide for sure? ) suggests that the Milky Way and Andromeda will have an initial "glancing blow" with a pericentre (i.e. closest approach) of 75 kpc (220,000 light years) about 5 billion years in the future (van der Marel et al. 2019). They will then move apart and then later crash into each other again, before fully merging after about ten billion years in the future, when the Sun has long gone (Schiavi et al. 2020). in other words, the collision is not direct enough for anything spectacular to happen until the Sun has ended its life as a normal star in about 7 billion years time.

The radial extent of the discs of both galaxies is of order 15 kpc, with an exponentially decaying scale length around 3 kpc away from their centres. The Sun is only 8 kpc from the centre of the Milky Way. Hence, if the Milky Way and Andromeda have an initial closest approach of 75 kpc there will actually be very little direct interaction. In particular, there will be no merger of central black holes and no significant gas interactions within the lifetime of the Sun, since the gas is largely confined to a similar radial extent as the stars and the black holes are central.

The Sun itself would not be near the initial interaction region, so any increased star formation, supernovae etc. (which since the gas discs are barely interacting, I think would be modest), would be tens of kpc away. The local stellar density would barely be changed and the night sky would only look different in the sense of the Andromeda galaxy being around 75 kpc away. Astronomers however would be able to identify the Andromedean (?) stellar interlopers because of their strange velocity components (which would not be visible to the naked eye!) and slightly different chemical composition.

Having said all that, the error bars on the tangential relative velocity of the MW and Andromeda are still quite large. So although the above looks to be the most likely scenario, there is still a chance that the collision will be more direct. In which case I point you to Anders Sandberg's answer. Equally, it may still be possible that the interaction is even weaker and the MW and Andromeda will undergo a series of distant passes before merging on timescales of 50 billion years (Schiavi et al. 2020).

A new paper by Schiavi et al. (2020) investigates the timing of the merger as a function of tangential velocity. For $v_t = 57$ km/s they find that the first closest approach takes place in 4.3 billion years at a pericentre of 50-100 kpc, depending on the density of the intergalactic medium, and the final merger takes place in 10 billion years - when the Sun will be a fading white dwarf.

The time of first close approach is only weakly dependent on the assumed value of $v_t$, but the time to merger is very dependent on $v_t$. Roughly, $\tau_{\rm merger} \propto v_t^5$ if there is no intergalactic medium, but is speeded up somewhat (unspecified in the paper, but seems to be doubled to 20 billion years for $v_t=92$ km/s from Fig.6 in the paper) by more realistic values.

The paper also shows that after the merger, the central black holes will coalesce on timescales of tens of million of years.

A further possibility, discussed by van der Marel et al. (2012) using $v_t = 30$ km/s (which is still within the bounds of possibility) has the merger at 6.5 billion years (when the Sun will still exist as a red giant). The merger has a $\sim 85$ per cent chance of making the Sun migrate to a larger radius from the merged galaxy centre. However, this would happen on long enough timescales that this isn't something that one would "notice" happening. But it is clear that the appearance of our galaxy would change from our present view of the Milky Way.

In addition to the other answers, here is an illustration showing how the collision might look like as seen from earth: 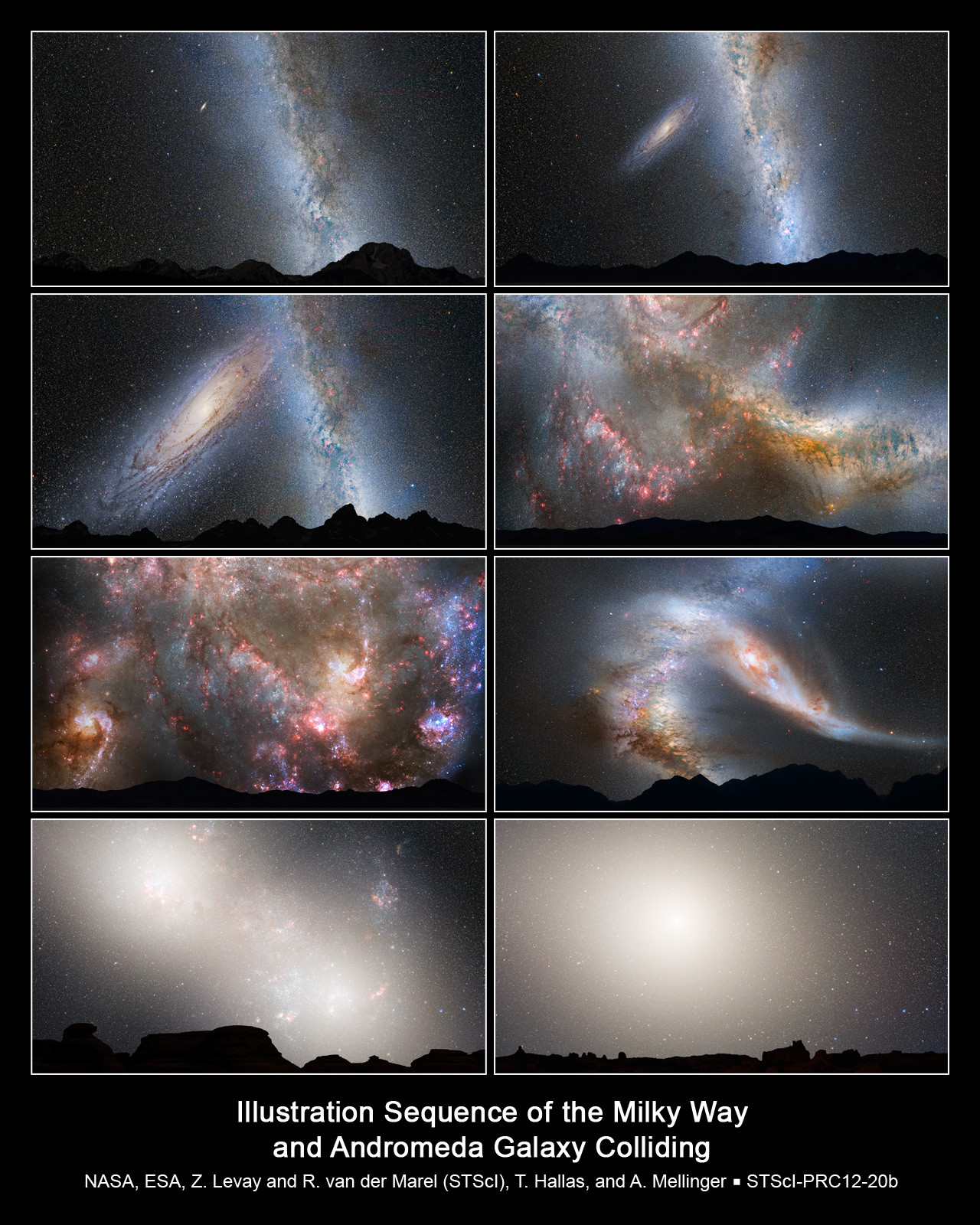 This series of photo illustrations shows the predicted merger between our Milky Way galaxy and the neighboring Andromeda galaxy.

First Row, Right: In 2 billion years the disk of the approaching Andromeda galaxy is noticeably larger.

Fourth Row, Left: In 5.1 billion years the cores of the Milky Way and Andromeda appear as a pair of bright lobes.

So, as already said in other answers, one can surely see a difference to our current night sky though the changes happen on extremely large timescales.

The Andromeda galaxy is now approaching us at $110$ km/s. Do you notice anything? No. It takes millions of years for the position to change noticeably.

It will be the same when the collision occurs. Our galaxy is somewhere around $1000$ light years thick. Since the Andromeda galaxy is traveling at about $10^{-3}$ c, it would take about a million years to penetrate through our galaxy the thin way.

Not the answer you're looking for? Browse other questions tagged general-relativity gravity black-holes astrophysics galaxies or ask your own question.

21
How close would you have to be to the merger of two black holes, for the effects of gravitational waves to be detected without instruments?
2
How will the Milky Way / Andromeda combined galaxy appear in 4 billion years?
1
Before we realized that supermassive black holes were at the center of large galaxies, how did the models explain galaxies?
12
The final parsec "problem"
6
Binary black hole merger viewed from inside the event horizon
6
Andromeda & Milky Way Merger: Gravitational Waves
4
Does the ringdown phase of a black hole merger ever stop?