Redshift of the Cosmic Microwave Background: increasing or decreasing? 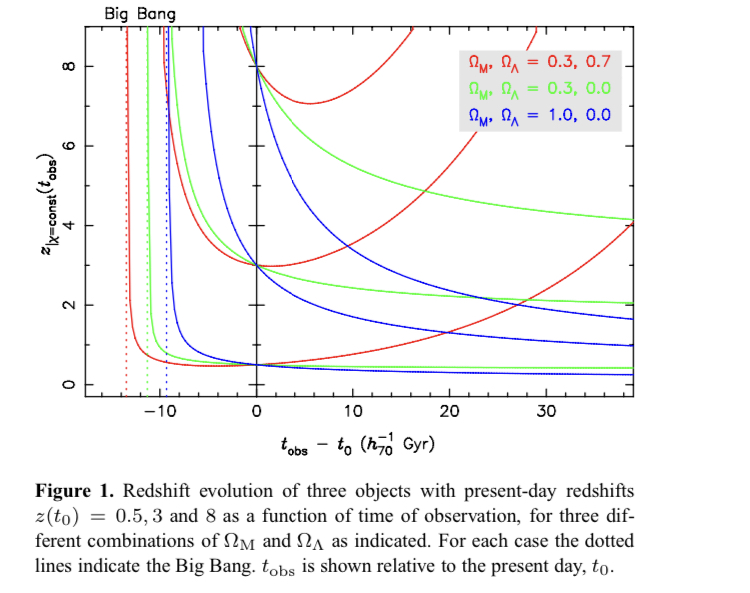 The picture and equation above are quoted from Liske et al. (2008).

According to the equation, the redshift of the cosmic microwave background radiation is expected to decrease at this point in time.

However, I think the redshift that will be measured in the future will increase.

Doesn't this equation apply to the cosmic background radiation?

I think you cannot apply this equation to the cosmic microwave background and indeed, the redshift of the CMB is increasing with time.

The difference is that the photons we receive from the CMB will always come from a fixed epoch in the universe (the epoch of recombination).

In contrast, the photons that we receive from a distant galaxy were emitted at an epoch that depends on the redshift of the galaxy and this will change with time. In other words, we can watch galaxies getting older. At high redshifts, as a galaxy ages it will experience a deceleration in the universal expansion, as we see it, and thus its redshift decreases. At later times and lower redshifts, the expansion accelerates and the redshift increases.

Not the answer you're looking for? Browse other questions tagged cosmology space-expansion cosmic-microwave-background redshift or ask your own question.

12
Does an object's redshift actually decrease with time?
1
How do we filter out radiation from galaxies from the cosmic background radiation?
8
Reference frame for the Cosmic Neutrino Background
1
Numerically solving for cosmological scale factor in mathematica
1
Does the cosmic microwave background (CMB) put a upper bound on Universe radius and size?
0
Temporal Variation of Cosmic Microwave Background Radiation