General rule for which direction the potential energy is positive in?

I am trying to solve question using the Euler–Lagrange equation and i am having trouble defining the potential energy.

Here i have defined the coordinates: 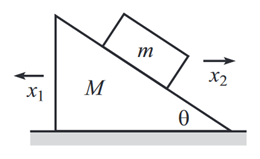 I have trouble working out which direction the potential energy will be positive, as we don't have a "$y$ coordinates" defined.

Two massless sticks of length $2r$, each with a mass $m$ fixed at its middles are hinged at an end. One stands on top of the other. The bottom end of the lower stick is hinged at the ground. They are held such that the lower stick is vertical, and the upper one is tilted at a small angle $ϵ$ with respect to the vertical. They are then released. At this instant, what are the angular accelerations of the two sticks? Work in the approximation where $ϵ$ is very small. 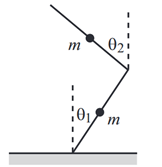 However again I have no idea whether the potential will be positive or negative.

What is the general method to find the direction of the positive potential energy?

If you have to do positive work to move an object across a force field, then the potential energy is increasing in that direction. Normally, if you let go of the object, it will tend to move toward a position of lower potential energy. In a gravitational field, the P.E. increases as an object is moved “up” (maybe to a smaller negative value).

Not the answer you're looking for? Browse other questions tagged newtonian-mechanics lagrangian-formalism coordinate-systems potential-energy conventions or ask your own question.