In the case of the Ehrenfest classification for the first order phase transition it is said:

If the first derivative of the free energy is discontinuous then we have a first order phase transition.

This is easy to understand. But it can be also found by taking the derivative of the chemical potential wrt Temperature:

And an additional question regarding phase transitions.

where: G is the Gibbs energy, F is the free energy, N the number of particles in the system, f the free energy for particle, and $\nu$ inverse of density. The point is that the chemical potential is proportional to the pressure. Which means that regardless of the phase in which the system is found, an increase in pressure means an increases in chemical potential for the gas and the liquid state and that the graph done by the professor is not correct,meaning for the liquid phase the chemical potential increases, but the one for the gas increases more, hence the system changes phase (into liquid) as pressure increases.

Am I correct about the part in bolt?

From your first formula (for the differential of Helmholtz free energy $F$) one can derive $$ -\left(\frac{\partial{F}}{\partial{T}}\right)_V = S. $$ Notice that the derivative is at constant volume, since the differential form clearly shows that $T,V$, and $N$ are the independent variables $F$ depends on. The partial derivative of the chemical potential wrt temperature is $$ -\left(\frac{\partial{\mu}}{\partial{T}}\right)_P = \frac{S}{N}=s. $$ Notice the division by N. The formula in the question, without division by $N$, cannot be correct because chemical potential and temperature are intensive quantities, while $S$ is extensive. Such formula can be easily obtained by recognizing that the Gibbs free energy $G=F+PV$ is a homogeneous function of degree one of its extensive variable $N$ and then, from the Euler theorem, $$ G = \mu N. $$ Therefore, every statement about the Gibbs free energy per particle is equivalent to a statement about the chemical potential as a function of $P$ and $T$. The derivative with respect to pressure of the chemical potential, at constant temperature, is $$ \left(\frac{\partial{\mu}}{\partial{P}}\right)_P =\frac{V}{N}=v $$ the volume per particle. By definition, this is a strictly positive quantity, therefore $\mu$ must be a strictly increasing function of the pressure.

Moreover, in a one-phase system, the Gibbs free energy is a strictly concave function of the pressure (for the stability of the thermodynamic equilibrium). This implies that the chemical potentials of two homogeneous phases in the neighbor of a first-order phase transition should behave as in the following figure. 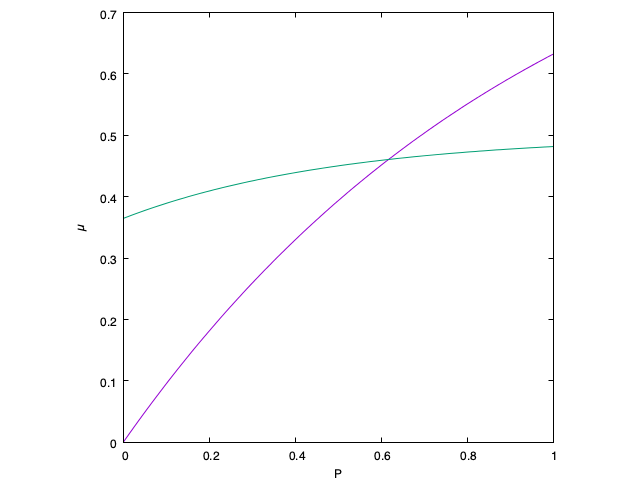 Not the answer you're looking for? Browse other questions tagged thermodynamics statistical-mechanics phase-transition chemical-potential or ask your own question.