The potentiality of the electric field

First you have to ask yourself, for what kind of force you can define a scalar potential. The short answer is a conservative force. Basically, a conservative force is a force for which the work done in moving a particle between any two given points in path independent. From this, it is obvious that for a particle traveling in a closed path, the total work will be zero. For such a conservative force, you can give some numerical value for the potential at any point. So when you move your particle from point A to point B, the force changes the potential energy by a given value independent of the path taken.

As a counterexample, take the force of friction. Being a dissipative force (i.e. not a conservative one) you cannot define for it a scalar potential. The potential differences would not be equal if you take two different paths connecting the same points A and B.

Now lets use a little math to see what conditions must a force $F$ satisfy to be a conservative one:

If your force $F$ satisfies these three conditions, then $F$ is a conservative one. Now, from the gradient theorem it follows that

In words, the gradient theorem says that line integrals through a irrotational vector field is path independent. So, if you want to use just words you can simply say this: "for any conservative forces, the potential difference depends only on the end points because the work done to move a test particle between said end points is path independent". But focus on the word conservative.

Others have provided mathematical explanations, so I'll try an intuitive explanation.

You've probably seen the electric field represented like one of these: 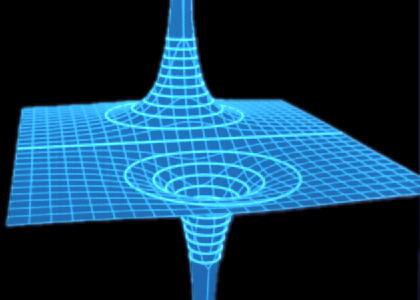 At the top of the mountain there is a positive charge, and at the bottom of the valley is a negative charge. A positive test charge in this field experiences a force analogous to a ball rolling downhill.

Notably, at infinity this field converges to a flat plane. This plane is by definition zero potential. Also, any line along the up-down axis will intersect this field at exactly one point. The vertical coordinate of that intersection is the electric potential at that point, measured in volts, analogously to how we measure elevation on the earth's surface in meters. It tells us the work required to move a charge from infinity to that point, per unit charge (thus, volt = joule per coulomb).

Since this is the intuitive explanation I'll skip the math, but if you have an intuitive understanding of what gravity potential means, then by this analogy you can see how the same understanding applies to electric potential as well.

If your question is "why is the electric force of a static electric field conservative", it might help you to ask yourself the question "what would happen if the work required to move a charged particle from $r_1$ to $r_2$ would depend on the particluar path the particle travels?".

One simple explanation is that the work you calculate does not depend on the path along which you move the charge. Or, in other words, if you move a charge in a closed path, the work done by the electric field is zero. See,

Not the answer you're looking for? Browse other questions tagged homework-and-exercises electricity electric-fields potential or ask your own question.