How is the climbing effect of superfluid Helium related to the Classius-Clapeyron relation?

From the Wikipedia article of Helium-4 (emphasis by me).

For example, if superfluid helium-4 is kept in an open vessel, a thin film will climb up the sides of the vessel and overflow. In this state and situation, it is called a "Rollin film". This strange behavior is a result of the Clausius–Clapeyron relation and cannot be explained by the current model of classical mechanics, nor by nuclear or electrical models – it can only be understood as a quantum-mechanical phenomenon. 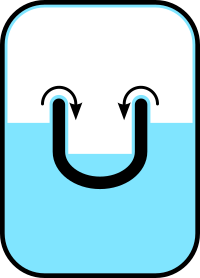 I thought this climbing happens because superfluid Helium wants to minimize its gravitational potential energy, and superfluidity allows it to climb up, which is not allowed classically. While climbing up, it is in an intermediate state with larger energy, which is not allowed in classical mechanics, but quantum mechanics allows it as this is like a tunneling process.

Browse other questions tagged thermodynamics phase-transition superfluidity or ask your own question.