Illustration of gravity as an accelerated motion

As far as I understood from general Relativity, gravity should be seen as the same as an accelerated motion. And that the light deviation was developed Einstein regarding to the lift model where a light particle would hit the moving lift at another point then it entered it. Shown in this image: 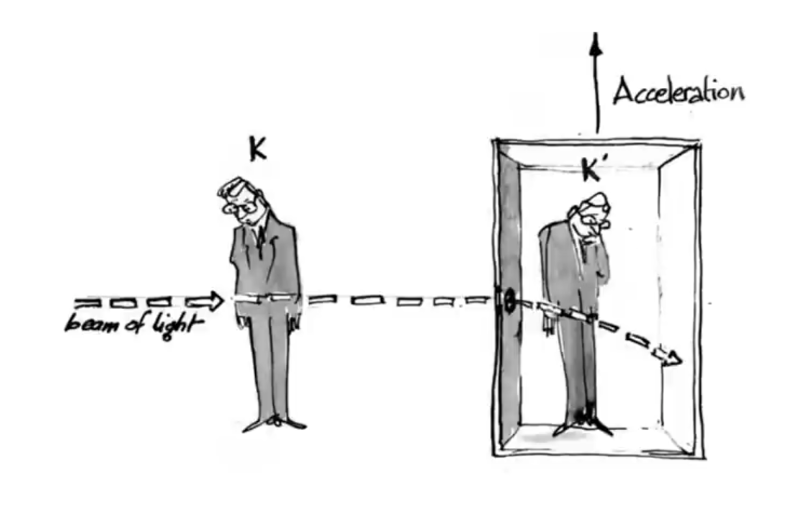 But I wonder, as we are speaking about accelerated motion, this model of a lift and deviated light would also work with relative motion in the non accelerated train examples of the specific relativity. I see that I am mixing things up here, but still I don't understand this. Maybe the point is, that in the train I know that I am moving and in the lift model the trick is just, that accelerated moving and gravity feels the same?!

Yes, you said it. The accelerated observer knows that he/she is in presence of gravity or, at least, moving with some acceleration. Furthermore, another important point to take into account is that the non accelerated observer does not see any curvature of the light path, in this case the trajectory of light is a straight line going downwards (see picture below)

Not the answer you're looking for? Browse other questions tagged general-relativity special-relativity visible-light reference-frames acceleration or ask your own question.

1
Principle of relativity and motion perpendicular to the direction of light beam
9
Why doesnâ€™t the Sagnac Effect disprove relativity?
0
Light (Photon) reflecting from an accelerated mirror
1
Is quantum gravity consistent with the principles of equivalence and relativity?
2
Does an observer inside of an accelerated frame experience tidal force?
0
Light perpendicular to spaceship constant relativistic speed - different points where it hits the wall as seen inside and from outside?
0
When Rindler co-ordinates are drawn why are accelerated obserevers drawn in an area implying faster than light motion?
1
An interesting question about the effects of time dilation
0
If General Relativity were only a theory of accelerated frames, would it contain the Equivalence Principle?