Can an electric field pass through a charged particle? As the field is energetic it would get absorbed by charge as I think 🤔. Let assume that there are two electrons one behind the other such that it seems like one electron in front is blocking the electric field to reach that electron behind. Would that charge be able to get that electric field? Answer this question so that I can ask another question related to it.

I guess you are misunderstanding the concept of the electric field, let me help you.

The electric field is not like a fluid that collide with obstacles and change its propagation after it.

Any field (electric, gravitational or magnetic) are a region of space where at each point there is a single well-defined value of a given physical magnitude. This fields are originated by the presence of a charge in some region and the range of the field that they create vanish at infinite distances from the charge. This can be seen in the equation of the electric field created by a pointlike electric positive charge: $$\vec{E}=\frac{q}{4\pi \varepsilon_0 r^2}\vec{u_{r}}$$, where $\varepsilon_0$ is the electrical permittivity in the vacum and $r$ the distance from the charge $q$.

Current answers seem to focus on static fields, while the question seems to be about incident propagating fields. I'll try to address this (purely classically). Whether one thinks of electric fields as something corporeal or not, processes akin to what you describe happen constantly (if only partially) in conductors and dielectrics, but it's certainly not the case that a propagating electric field gets "absorbed" entirely whenever it encounters a charge, or else light could never propagate through the atmosphere.

If an electromagnetic wave were incident along an axis containing two free charges somehow arranged to be initially at rest the instant the incoming wave reaches the first charge, the response of the first would certainly impact the response of the second: the first accelerates in response to the varying field, causing it to generate its own radiation which interferes with the original wave, and one could think of the adjustment to the net propagating field as meaning the first charge partially "absorbed" the incident wave. But exactly how things play out would depend in a complicated way on the incoming wave-- its frequency, amplitude, and breadth. What can be said quite confidently is that it could not cancel the incoming field completely.

Remember that E&M is linear and hence has the superposition principle: one can think of the dynamics as the incident wave continuing on exactly as it would in the absence of the charges, plus the perturbation of whatever fields the charges generate as they move. Generally speaking, a single charge won't be able to muster much of a perturbation, so for the most part the wave would continue on on its merry way. Only with systems of charges responding en masse in an uninhibited manner can you get effective screening against propagating fields, as in a Faraday cage. 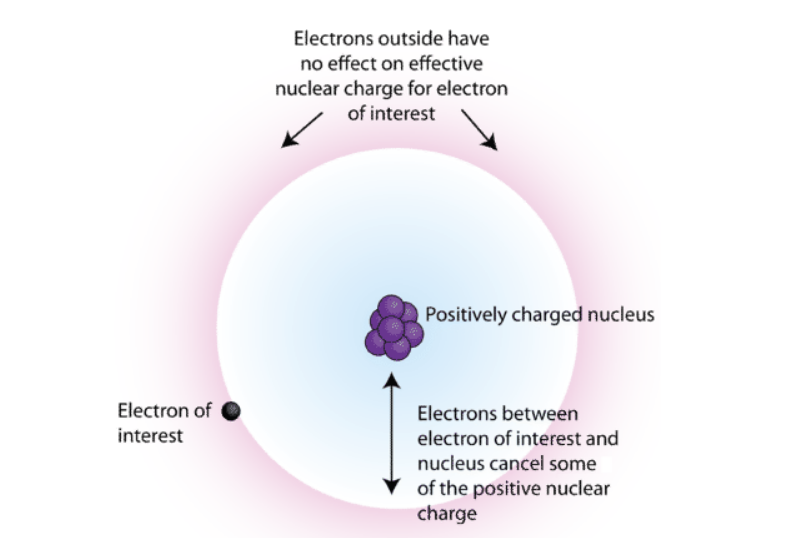 Figure: Electron shielding is due to the blocking of valence shell electron attraction by the nucleus, due to the presence of inner-shell electrons. The interior electron cloud (light blue) shielding the outer electron of interest from the full attractive force of the nucleus. A larger shielding effect results in a decrease in ionization energy.

In an electric field, the field lines are not really "passing through" the charges as you have suggested, but they feel a force, and are accelerated by the field. But they don't really "absorb" the field since the field is unchanged before and after interaction with charged particles in the field (they do change their energy when interacting with the field).

The electric field is a region of space where a charged particle experiences a force at any point in that region. Assuming we ignore the electric fields of the individual charges$^1$ in the larger electric field $\vec E$, the location of one charge relative to another, or if we have "one behind the other", is irrelevant and both charges will still experience a force that depends on their location. The electric field (force per unit charge) is given by $$\vec E=\frac{Q}{4\pi \epsilon_0 r^2} \frac{\vec r}{\mid \vec r\mid}$$ where $Q$ is the charge causing the field and $\vec r$ is the location of the charges, and for simplicity assume that if we had individual charges $q$ in the field, then $Q\gg q$.

$^1$ Individual charges will have electric fields that affect each other, but here we are considering the effect of one large central charge on unit charges in that field.

For instance, when calculating the electric field resulting from a homogeneous spherical charge distribution (Maxwell $+$ Gauss), the contribution of the successive layers simply add up, hence the resulting field is the sum of all the elementary contributions, there is no shielding effect from a layer to the next.

In the preceding examples, however, all the masses are regarded as fixed in space, therefore the formulation of the problem is essentially static as if said charges were held in place by some magic glue.

In the case of conductors, the free electrons will tend to have a shielding effect as in the Faraday cage.

Yes, in the same way that the Earth's gravity can get to you through the chair you're sitting on.

There will also be an electric force between the two particles, dependent on their charge + distance, but the Coulomb forces all just add linearly for stationary charged particles, just like gravitational forces add linearly.

An electric field between two plates for example is created by large amounts of charged particles in each plate, many of them cancelling each other out (e.g. neutral atoms with equal numbers of each), but at least to a good approximation, everything just adds linearly.

(Electromagnetism and gravitation are different fundamental forces and behave differently in some ways, not just in terms of having different "charges" (electric vs. mass). e.g. accelerating charges create radio waves somewhat differently from how accelerating masses create gravity waves. But they're the same in this respect, and I think this is a useful analogy.)

Definitely, yes. Maxwell’s equations are linear in the fields. This means that the principle of superposition applies and the field at any point is equal to the sum of the fields from all of the charges. Charges do not “block” the electromagnetic field.

Now, other answers have mentioned screening effects, and they are not wrong. Screening effects are not an example of the field being blocked, but rather an example of a field in the opposite direction being provided. For example, if you have a positive charge you get one field, and if you have a negative charge close to the positive one its field is almost opposite. So if you have both then they nearly cancel out and you are left with almost no field. Not because one absorbed the field of the other, but because they simply added together to make a small total field.

As the field is energetic it would get absorbed by charge as I think 🤔. Let assume that there are two electrons one behind the other such that it seems like one electron in front is blocking the electric field to reach that electron behind.

As in your previous question, to understand energy conservation in EM you must understand Poynting’s theorem. For a charge to absorb energy from the field requires that $\vec E \cdot \vec J$ must be greater than 0. If the charges are all stationary, then $\vec J=0$ so no work is done. Only if the middle charge moves would some of the energy not be available to reach the last charge.

Not the answer you're looking for? Browse other questions tagged electromagnetism electromagnetic-radiation electricity electric-fields or ask your own question.

4
How was it found that a charge produces an electric field rather than a 'local' electric force?
1
Do Electric fields really contain energy in them?

2
If light is an electric and (magnetic field), how can it be absorbed?
0
Given a Magnetic Field vector, what is the Electric Field, charge density, & current density?
1
Net electric field of charged spherical shell and dot charge
0
Which photons drive the Electromagnetic Wave?
2
X-ray scattering: Mathematical description of a *fluctuating electric field* and *accelerating charged particle*
0
Capacitors and how electrons flow given the electric field direction