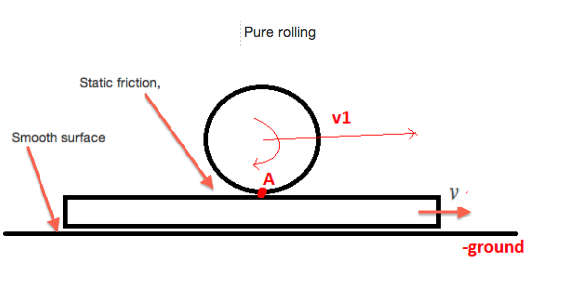 Here $v1$ is relative to the block on which sphere is pure rolling but static friction isn't $0$ as of now .

In the following diagram, is work done by static friction $0$ ?, since the point of application is also moving with speed $v$ w.r.t. ground here and is only stationary w.r.t. the block on which sphere is rolling w.r.t. ground here .

If it isn't $0$ , where is static friction increasing net Kinetic Energy of the rolling sphere?

The mass of the block which is on smooth surface $\rightarrow \infty$.

Additional comment : Because when we consider rolling w.r.t. ground of a new sphere, the net kinetic energy doesn't change . Rolling KE changes to translation KE or vice-vera depending upon situation . And now static friction should also do this in this case also , however , the deinition of work is also $\vec {F}\cdot \vec {dx}$ for point of application and and now point of application is always moving with $v$ w.r.t. ground, so according to this definition work is not $0$ . So is Kinetic Energy increasing somewhere w.r.t. ground? And if it isn't increasing there's something wrong with the way I am defining work ?

EDIT: You can also consider evaluating work for an incline plane wedge falling in free space which has a sphere rolling on it and gravity and air resistive forces are acting on both the rolling sphere and the inclined plane .

In the following diagram, is work done by static friction 0 ?, since the point of application is also moving with speed v w.r.t. ground here and is only stationary w.r.t. the block on which sphere is rolling w.r.t. ground here.

When you're standing on the ground, you're not mysteriously being pushed by friction. It's the same thing here, the wheel is "standing" with respect to the point of contact, though the points of contact are changing over time.

2
Can the work by static friction on an object be negative?