Ask Question
Asked 1 month ago
Active 1 month ago
Viewed 112 times
5
$\begingroup$
Homework-like questions and check-my-work questions are considered off-topic here, particularly when asking about specific computations instead of underlying physics concepts. Homework questions can be on-topic when they are useful to a broader audience. Note that answers to homework questions with complete solutions may be deleted! 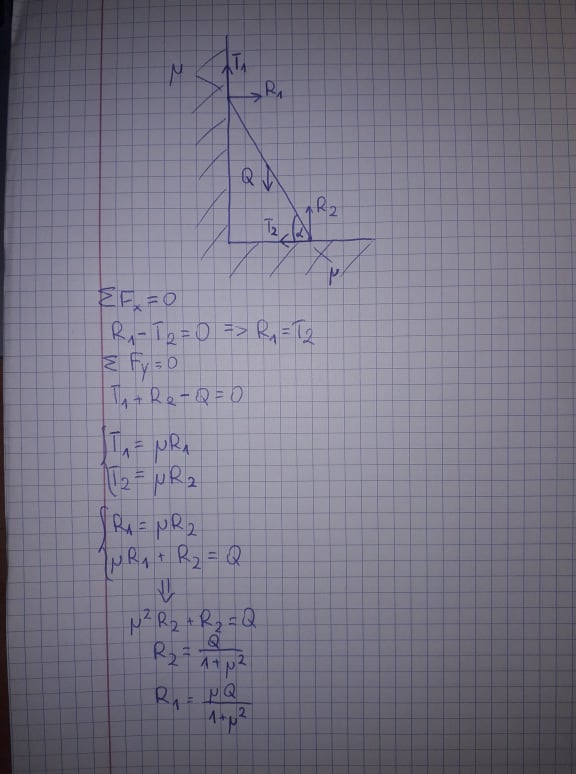 I've got a ladder at some angle that is leaned on the wall. There is friction $T_1$ and $T_2$, and reaction forces $R_1$ and $R_2$. According to the rule that horizontal and vertical forces must equal zero, I've got result that $R_1$ and $R_2$ forces are independent on the alpha angle. Is it possible? Because it seems unintuitive for me.

If the ladder isn't slipping, it's in an equilibrium situation. In addition to horizontal and vertical forces being balanced, torques must also be balanced in this situation. Since torques must be balanced about every point in the diagram, it is seen that torque must be balanced about the point where the bottom of the ladder touches the floor, and about the point where the top of the ladder touches the wall. If you set up a torque equation where the pivot point is at the bottom of the ladder, you will find that $R_1$ does indeed vary with angle alpha. In addition, since there is friction against the wall, you will also find that $R_2$ varies with angle alpha as well.

Just because you can derive equations that don't have an explicit angle dependence doesn't mean there isn't any angle dependence at all. e.g. if you have $R_1=T_2$ you are really equating two functions of $\alpha$ since this holds at any angle: $R_1(\alpha)=T_2(\alpha)$.

To tease out the explicit angle dependence, you need to analyze the torque about some point, e.g. the bottom of the ladder. This is where the angle will matter: for the balance of torques.

Keep in mind that in a static situation, the coefficient of friction gives only the maximum allowed friction force.
In this situation you cannot assume that both friction forces are at their maximum. You will need one (or more) torque equations. Probably, you can only get $T_2$ in terms of $T_1$. Often, $T_1$ is given as 0 in this type of problem.

Not the answer you're looking for? Browse other questions tagged homework-and-exercises newtonian-mechanics forces or ask your own question.