What is an "excited nuclear isomer"?

From what I gather from this page, nuclear isomers are excited atomic nuclei. They can be very short and long lived. But, I am still pretty lost. For example, I can't find anything that says HOW the nucleus gets excited. Then, the page says:

Nuclear isomers have long half-lives because their gamma decay is "forbidden" from the large change in nuclear spin needed to emit a gamma ray.

So, this claims isomers last longer, but that seems to be the case less often than not. All three isomers of antimony-126 and 129 are shorter than the ground state. However this is not always the case as Tin-121m1 has a longer half-life than its ground state.

Then, there is a whole section for "Metastable Isomers", but I thought they were ALL metastable, afterall, the intro says:

A nuclear isomer is a metastable state of an atomic nucleus, in which one or more nucleons (protons or neutrons) occupy higher energy levels than in the ground state of the same nucleus.

I will point out that the basics of this question have already been asked 10 years ago here. However, the only answer was by a nuclear physicist grad student who had never heard of nuclear isomers, though he deduced what they were in his answer. I bet he is well-versed in isomers, by now. I would like some specifics, here. Thanks for your help.

Most of the questions are answered in the linked wikipedia article, particularly the ambiguities of the current nomenclature, so I'm not going to restate what it says there, and it is fairly complete. 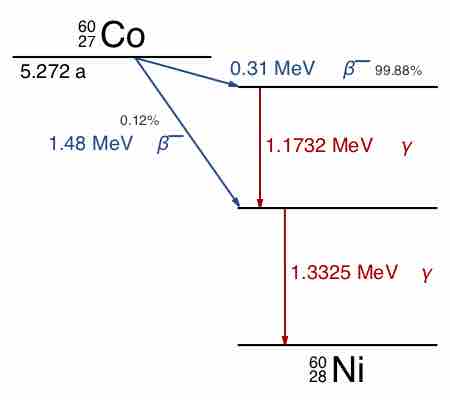 So looking the two isomers:

While the masses of constituent nucleons is:

The binding energy is the difference, so for Nickel and the 1st isomer:

Thus: the isomer has less binding energy (larger mass) than the ground state. At greater excitation energy, the binding energy falls. When it passes 0 and becomes negative: the nucleons have too much energy and the nucleus is totally unbound. (Of course, in practice, this may happen sooner...by emitting a $\alpha$ particle, for instance, in which case a new nucleus can be formed).

In this decay, $^{60}\rm Ni$ is spin-0, so it is a spherically symmetric charge distribution. The 1st isomer is not, it has an electric quadrupole moment. The two states are coupled by the electric quadrupole operator via the emission of a gamma ray.

For instance, the $^3{\rm He}$ wave function could look like:

A ultra simplified toy model is:

Here $S(\vec r_i)$ refers to the $i^{th}$ nucleon being in a $l=0$ S-state. (It's a toy model because it has the wrong spin and the wrong symmetry, but its purpose is to show just how "fungible" nucleons are).

An isomer could put a nucleon into an excited orbit state, say and $l=1$ $P$-state, thereby changing the shape of the nucleus. The spatial wave function would then be:

and the full wave function:

which means the 1st nucleon is $1/18^{th}$ a spin up, orbitally excited proton (along with another similar term). Other terms are an unexcited proton or neutron, or an excited neutron (all spin up, for simplicity of the toy model)..and each with different entangled states with the other nucleons.

And that was a static quantum mechanical shell toy model. IRL one has to consider (effective) field theory states with virtual exchange mesons and all that stuff. The point being: and excited state (isomer) is a unique state of entangled nucleons, and you cannot label which nucleon is excited. (BTW: the same principle applies to atomic physics. For instance, we'll say in X-ray absorption, that a K-shell electron is kicked out of an Fe atom, but that electron was an entangled mixture of all 26 atomic electrons, so the language we use is sometimes misleading...e.g., too classical).

You’re probably familiar with “excited atoms,” in which energy is stored in the electromagnetic fields between an atom’s electrons an its nucleus. An excited atom has a different total energy than the ground-state configuration of the same electrons and nucleus, and generally has different angular momentum, parity, and other quantum numbers.

For low-$Z$ elements it may be useful to model the atomic excitation as “this electron” or “that electron” moving from one hydrogen-like orbital to another. But for atoms with many electrons, the electron-electron interactions start to become just as important as the electron-nucleus interactions, and the approximation of single-electron excitations becomes less useful. Electrons are fungible; that’s one of two crucial facts which leads to the Pauli Exclusion Principle.

Transitions between an atom’s different excited states are mediated by the absorption and emissions of photons. Different excited atomic states may have different lifetimes, for a number of reasons. In some complicated atomic (or molecular) electron systems, you might be able to excite the system using a high-energy photon, like UV, but the system prefers to decay by emitting a sequence of several lower-energy visible photons. If one of these intermediate states is long-lived, the visible photons may be emitted a long time after the UV energy pump has been removed. These molecules will “glow in the dark,” and it’s fun to use them as paint for stickers and children’s clothes.

Why am I telling you about electrons and fluorescence when you’re asking about nuclear isomers? Because fundamentally they are the same effect. The phenomenon of discrete energy levels with some set of quantum numbers and symmetries isn’t a consequence of the electron-nucleus interaction, despite what you may have been told when you studied the hydrogen atom. Discrete energy levels, and quantum numbers associated with various symmetries, are a general phenomenon that occurs in any quantum-mechanical system that is confined to a small volume (a “particle in a box”). And, as you’re aware, the volume of a nucleus is substantially smaller than the volume of its electron ensemble.

A nuclear isomer is an excited state — a configuration of nucleons where some extra energy is stored in the fields between them — whose lifetime is long enough to be interesting. If I were in charge I would refer to isomer decay as “nuclear fluorescence.”

If you want to know about why some states’ lifetimes are longer than others … well, you have do a lot of nuclear physics for that. Two rules of thumb are that high-energy transitions tend to be faster than low-energy transitions, and that transitions between states with similar angular momentum tend to be faster than transitions between states with very different angular momentum. Those two rules are enough for you to understand the stability of tantalum-180m. From the Nuclear Wallet Cards at the NNDC (which you seem to be re-creating via Wikipedia),

(Beware that the notation “tantalum-180m2” is nonstandard: it’s not clear whether “m1” should precede “m2” in mass, or in decay energy, or in lifetime, or in spin, or in historical order of discovery. To unambiguously identify a nuclear state, specify its energy, angular momentum, and parity.)

Decay via weak interactions (beta decay) and strong interactions (alpha emission, proton/neutron emission, fission) are also subject to the general guidance above: the relative energies and angular momenta of the initial and final states influence the rates of the decays. The electron-capture decay of tantalum-180m to the hafnium-180 ground state, in the language of beta decay, would be “seventh-forbidden.”

Interestingly, hafnium-180 has a quasi-mirror state that’s also an isomer. However in hafnium the high-spin configuration of the nucleons isn’t the lowest excited state: the path to the ground state is a cascade of one dipole and four quadrupole photons.

are both “allowed Gamow-Teller” beta decays with positive Q-value; both are observed.

$^1$ Actually the Ta-180m isomer is the second excited state, so there is one other photon emission possible: an E7 transition with energy 38 keV, followed by an M1 decay to the ground state. If Ta-180m decay is ever observed, that’ll be the path.

Not the answer you're looking for? Browse other questions tagged radioactivity isotopes nuclear-isomers or ask your own question.

3
How nucleons get excited?
3
What are nuclear isomers? What is isomeric energy?
1
What is the maximum spin of a particle? (Both theoretically and observed)

13
Why some nuclei with "magic" numbers of neutrons have a half-life less than their neighbor isotopes?
3
Creation of nuclear isomers
57
Why is technetium unstable?
3
Why does the metastable form of Technetium-95 have a longer half-life than its most stable state?
3
Physical limit for the shortest possible half-life?
7
Have we found all stable nuclear isomers?
2
Stability of isotopes
1
If we need the term/concept of "isotope", or why we call them "elements" of the periodic table
0
What is the physical basis behind the half life of nuclear decay?