Almost every book on physics that I read have some weird and non-clear explanations regarding the potential energy. Ok, I do understand that if we integrate a force over some path, we'll get a difference in some origin-function values ($\int_{A}^{B} Fdx = U(B) - U(A)$). This function is the potential energy. Of course, whether we can define this term or not depends on the force.

Thus, when $r_A>r_B$, the magnitude is positive and therefore $U_A>U_B$. In other words: when the distance between the bodies is being increased - the gravitational potential energy of the system is also being increased.

Giving absolutely no explanation on why all of a sudden they put a minus sign into the integral.

... Calculating the work gravity is doing is no different from the calculation of the work done by an electric field, with two exceptions - instead of $q_1q_2/4 \pi \epsilon_0$ we should plug $G M m$, and we also should change the sign, because the gravitational force is always a force of attraction.

Now, this is not satisfying at all. So what if it is an attraction force? How this should influence our calculations, if the work is defined as $|F| |\Delta x| \cos \theta$, so the sign only depends on the angle between the path vector and the force vector? Why they put a minus sign? Is is just a convention or a must thing to do?

Some say the sign is important, others say the opposite. Some explain this as a consequence of that we bring the body from infinity to some point, while others say it is a consequence of an attractive nature of the gravitational force. All of that is really confusing me.

Also, in some of the questions like "what work is required to bring something from point $A$ to point $B$ in the field of gravitational/electric force", the books sometimes confuse $U_A-U_B$ and $U_B-U_A$ - as I understand it - the work that I must do is always $U_B-U_A$. However the work that the force that is being created by the field do is always $U_A-U_B$, am I correct?

I think you just forgot that the $\int_A^B F\,dl$ is not a scalar expression. Rather it should be written in a form $\int_A^B \vec{F}\cdot d\vec{l}$. Then it comes to the sign of the scalar product: $$\vec{F}\cdot d\vec{l}=F\,dl\,\cos\theta$$ where the angle $\theta$ is taken between the vector $\vec{F}$ and the direction of the tangent to the integration path from $A$ to $B$. Then, in your first example, 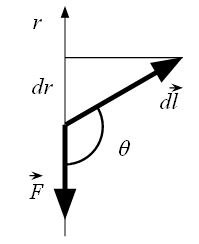 For your second example:

...we also should change the sign, because the gravitational force is always a force of attraction.

Yes this is correct.

Let's take it from the start. What is kinetic energy, $KE$?

Now, how to change the kinetic energy of a particle? For that you'll have to change $|v|$, and for that you have to apply a force.

Then, how to calculate how much $\Delta KE$ is, knowing the path of the particle?

The answer to this is: find $\int^b_a \vec{F}\cdot d\vec{s}$, where $d \vec{s}$ is an infinitesimal translation vector along the path, i.e., in the direction of application of the force, but you must know path in advance.

This integral is what we call Work. It is just a number. We could have also called it "change in kinetic energy by a force" but "work" sounds better.

A limitation of work: You can't predict path ever given work.

Law: Energy (also a number) of an isolated system is conserved.

Conservative forces by definition are such that between any fixed two points, no matter what path you do the work, the calculation is independent of path. For non-conservative forces, work depends on path.

Now, we know energy of an isolated system is constant, and a "source of force" will apply either a non-conservative or a conservative force, and whatever energy is gained by the moving body, the source will lose the same amount of energy.

Suppose you apply a non-conservative force and take an object from $A$ to $B$, your work is dependent on path; there is an infinite number of possibilities of how much energy you'll lose (gain, if $\Delta KE$ is negative).

But for a conservative force there is only one possibility, since work (or equivalently $\Delta KE$) is independent of path. So a source applying a conservative force will always lose/gain the same amount energy if you take it from $A$ to $B$ no matter what path you take.

So we can call this energy change for a conservative force: potential energy, or symbolically $\Delta U$ (showing potential of a source). Now only you can calculate $\Delta U$.

Now think it over: Energy lost by source equals energy gained by the thing that moved, so we can say $-\Delta U = Work = \Delta KE$, recalling that $\Delta U + \Delta KE = 0$ from the conservation of energy.

And when textbooks refer to potential Energy, they are calculating changes by assigning $U_{\infty}$ as $0$ as only change matters, you can choose any point to have zero potential and the net change will automatically adjust.

And this potential energy change can be physically seen as change in field of a force in space, or compression of spring, etc.

"So what if it is an attraction force? How this should influence our calculations

This relationship is the source of all the mysterious changes of sign that are confusing you. In gravity the force between two bodies always points in the direction of less separation, but in electrostatics it can point either way depending on the sign of the product of the charges.

We happen to call this constant the energy. This is why where the minus sign comes from on the potential.

As for the work you need to do, you have to calculate $W = \int \vec{F}\cdot\vec{dr}$ where the force is the force you apply to bring the particle from point A to point B. To find out whether this is Ua - Ub or Ub-Ua, you need to check how they calculated it. This is not always the same in electromagnetism books. Some like to take $d\vec{r}$ a path going outwards from the point charge or coming in. In away, if you calculate $\int\vec{F}\cdot d\vec{r}$ where $\vec{F}$ is the force you apply along your path, you never go wrong.

Not the answer you're looking for? Browse other questions tagged newtonian-mechanics newtonian-gravity potential-energy conventions or ask your own question.