How do particles that exist only as a cloud of probabilities have actual rates of speed?

I recently asked a question about why relativistic effects come into play only with the superheavy elements. The top answer I got was pretty good and I understand most of it, but the answer brought up another question for me. The answerer said that the electrons move around their orbitals at .58c, but he gave a footnote for "moving that read:

Electrons are not "moving around" a nucleus, but they are instead probability clouds surrounding the nucleus. So "most likely distances of electrons" would be a better term.

Now this was not entirely new to me, I am aware of superposition where the particles occupy all of the points simultaneously. But, I am confused about the "most likely distances of electrons part", because there is some sort of speed given. After, a particle is observed and the waveform collapses, does it immediately revert back to the waveform and assume the superposition? Because, if this is the case, isn't velocity (speed and direction) meaningless? I mean if you measure a particle in one point with a given velocity, then it immediately changes, what good is it to know these properties? Or, did the observation somehow change the next calculated waveform?

To understand velocity in quantum mechanics, you have to start with a pure velocity state, which is a plane wave extending to infinity in all directions, and with has a complex value that spins round the unit circle in the complex plane as you look along the direction of motion. The formula is something like $e^{i(k.x-\omega ct)}$. If you look at this with $k=0$ in 4 dimensions, it's a train of waves progressing forwards in time. At each instant of time, it has the same value everywhere - it's a stationary wave. It varies over time, but not in space.

Now have the observer move past this wave at a set velocity. This tilts the view, so in the new frame of reference k is non-zero, a vector pointing in the direction of motion. The wavefronts are tilted in spacetime. Now if you take slices through the wave at instants of time, you find the value varies with a wavelength inversely related to the speed. Because the wavelength of the plane exponential wave is constant everywhere, so is the velocity.

This is the case where we have perfect knowledge of velocity, and no idea at all of position. We can get a more localised position if we combine waves of different wavelengths, in the manner of Fourier series where we build up an arbitrary function by combining waves. So we can combine lots of plane waves representing different pure velocity states, summing them to build up our atomic orbitals - constraining the electron's position. The tighter we constrain the position, the higher the frequencies of the waves we need to combine, because we need very fast variation in value to construct sharp edges. And high frequency corresponds to high velocity. We have a fuzzy cloud in position space, which is the Fourier transform of a fuzzy cloud in velocity (=spatial frequency) space. The smaller and more confined one of them is, the larger and fuzzier the other is. This is the Heisenberg uncertainty principle.

When we say that "electrons in atomic orbitals are moving relativistically", what we mean is that to get the required confinement in position, we have to include high frequency wave components that correspond to plane waves with high velocity. The orbital is very spread out and fuzzy in 'velocity space'.

The shape of an orbital represents the probability distribution of its location in 3-dimensional space. It tells you how likely you are to find an electron in that volume at any instantaneous time slice.

That funny-shaped orbital cloud is what happens when you try to confine an electron so it isn't allowed to freely propagate through space. As pointed out by others here, that confinement in space means that the orbital cloud is the wavefunction of the confined electron, and that this "confined" wavefunction does not evolve in time (its shape does not change and the electron cannot leave on its own).

In addition, the more certain we try to make the position of the electron by confining it within an orbital, the less certain its momentum will become. In practice, as atoms get bigger and bigger, the momenta of the electrons occupying the outermost orbitals grow until their (unmeasurable) velocities become an appreciable fraction of the speed of light i.e., they become relativistic.

This is a retired and recovering engineer's way of looking at a quantum mechanical system. @Nullius in Verba's answer is the physicist's way. You will note that in the engineer's way, it's convenient to visualize an electron as little bit of something with a vestige of position information mixed with just a hint of velocity information, but as others here have pointed out, the math itself doesn't admit of such a visualization.

In fact, quantum systems like this are well-known for their unvisualizability (there's a term in German which is more elegant than this but I cannot remember it at the moment).

Your description is true as far as modeling an atom with quantum mechanics. It has to be modeled with orbitals around the nucleus, because its space time function is a probability function. The space time forms of these probability functions allow to model lattices in solids, with fixed points for the nucleus and orbitals around it which allow regions in space that can have positive and negative fields and set up chemical bonds.

The fact that by measuring the spectra of atoms we know the energy levels, in the Bohr model allows to calculate a velocity for the electron. The Bohr model is superseded by the quantum mechanical solutions which give the probabilistic space-time solutions for the atom, but since it is a good approximation to the QM solution, it can be considered an "average" velocity.

There is no way to measure an individual electron's four vector while bound to an atom . One can measure it if it interacts with a particle, as for example "the atom is hit by a photon of fixed energy, with an energy higher than ionization", and an electron comes out and its velocity can be measured. The balance of the energy and momentum four vectors of the interaction "atom+photon" will give the four vector of the electron , and thus its velocity in a secondary way. An accumulation of these measurements would give on average the velocity calculated by the Bohr model.

The wavefunction of a particle doing loops around some point in space is something like this: 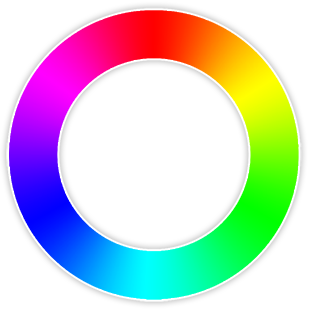 where the hue represents the complex phase of the amplitude. This particular image (just a random color wheel that’s of course woefully inexact physically) indicates that the particle is most likely to be found at a certain range of distances from the center, but with equal probabilities for all the angles. The phase is very important: while it’s hard (impossible?) to measure it directly, it participates meaningfully in calculations. Specifically, if you know the wavefunction, including the phase, you can calculate its evolution over time (this is the entire point of the Schrödinger equation)—it encodes all the information necessary for this.

Now imagine that you’ve done the calculation and figured out that after one second the wavefunction will evolve to a function that looks the same except the complex phases are shifted 90° clockwise—the red is now to the right. You now have a meaningful description of what the particle is doing, it’s orbiting at 240 rpm, while being evenly spread over the entire orbit all the time.

So a particle can have a speed while the region of space it occupies stays the same. If the concept of “wavefunction collapse” confuses you, consider interpretations of QM that don’t make use of it, perhaps those approaches will make more sense to you.

Not the answer you're looking for? Browse other questions tagged quantum-mechanics special-relativity atomic-physics probability orbitals or ask your own question.

24
Can you please show me a final atomic model which demonstrates movement of electrons inside it?
41
Why do “relativistic effects” come into play, when dealing with superheavy atoms?
26
If free electrons have classical trajectories, then why don't bound electrons around the nuclei have it too?

1
Why is the Bohr's idea of defined circular orbits overruled?
4
Is it true that all particles that have a speed less than the speed of light must also have mass?
1
How does the comparison of rates depend on mutual speed?
4
How do we define atomic radius if we know that the actual scenario is not about discrete shells but of an electron cloud?
0
Is an atom's photon recoil on absorption affected by a beam splitter?
9
Electron falling into proton approaches infinite kinetic energy why?