In uniform circular motion, acceleration is $\frac{v^2}{r}$ and time which it acts $\rightarrow 0$.

So $\Delta v = 0$, but then why/how does direction change, when the acceleration should be producing no effect at all.

Now in polar coordinates, the direction vectors are not fixed, they are linked to the body so they have a time derivative. In this case, you can easily convince yourself that the time derivative of of $\hat{e}_{\theta}$ is something directed along $\hat{e}_r$. If you fail to see this, write out the polar vectors in cartesian coordinates, and derive them with respect to time assuming $\theta$ is a function of time.

The above equation can then be pictorially seen as

Officially, I completely agree with the other answer given. I would like to offer this answer as a simplistic, intuitive answer to the question. No math involved.

I understand where your question comes from. In fact, depending on your current level of education, this question could indicate a high potential for future scientific success.

We all know that if you throw a ball, it falls to the ground. Gravity acts downwards and it make the velocity of the ball change to a more downwards direction. So why doesn't it do the same for things in orbit? (That's where gravity is the centripetal force). Why doesn't it change their velocities to more inwards directions?

The answer is quite simple, it does! Circular motion is a very special case. Imagine Superman. Say he wanted to show you how it was done and he threw the ball at around 8km/s. Naturally, you'd expect gravity to make the ball's velocity shift towards the ground, and you're right, it does. However, the ball is moving so fast the by the time gravity has shifted the velocity towards the ground, the direction of the ground has shifted by the same amount (due to the curvature of Earth), which means the ball still seems to be moving parallel to the surface, even though gravity has made the velocity shift downwards.

Ok, that's no problem. I'm sure you knew that already. So why doesn't the speed of the ball ever increase or decrease? That is simple too. Say the moment Superman throws it, the ball is moving horizontally starting from the top of Earth (say at $0^o$). The very next instant, you'd think there should be that same horizontal velocity plus the new, very small vertical velocity that gravity just added, right? No. The instant it is thrown, gravity acts completely downwards. However, as it travels to the next instant of time, the ball will experience a very small amount of force in the horizontal direction, against the direction of motion because there were non-zero angles along that path and gravity, acting towards the center of Earth, had a small component that was in the horizontal direction. The effect of this is to slow down the horizontal velocity and speed up the vertical velocity such that the ball is travelling at the same speed and still parallel to the surface. As I said, circular motion is a special case. If the ball were thrown at any other velocity, the speed at point 2 would be slightly different and eventually it would hit the ground or fly off into space (or elliptically orbit).

But, you say, when I swing a ball on a rope, I can make it go as fast as I want and it keeps the same radius. How can more than 1 speed be the perfect speed? Well, in that case, the centripetal force is the tension in the rope. The faster you twirl it, the more tension there will be. The net effect is that the force is constantly changed so that the velocity is perfect.

Hopefully, that answered the question.

The above says that "the applied force on an object times (dotted) with its velocity is equal to the time rate of change in its kinetic energy." Notice that if the applied force is perpendicular to the velocity, that is if $${\bf F}\cdot {\bf v}=0$$ then the kinetic energy is constant. This is the case in uniform circular motion, and hence the object doesn't speed up.

Remember, velocity is a vector.

Centripetal force doesn't speed the body up because it was more or less designed/derived that way.

Centripetal force is something that comes out very easily by geometrical means. The first figure below shows how the position vector changes for a particle undergoing uniform circular motion. $v\cdot dt$ is the magnitude of the change in position vector.

The second diagram shows how velocity changes, from $\vec v_1$ to $\vec v_2$, where both have the same magnitude $v$. The change in velocity is $a\cdot dt$ 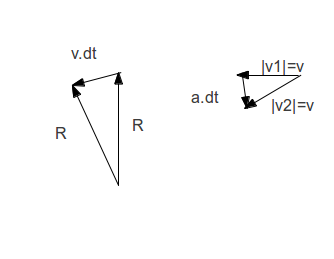 Now, these two triangles are similar (isosceles with equal apex angle). Thus, $\frac{vdt}{R}=\frac{adt}{v}$. From here we easily get that $a=\frac{v^2}{R}$, and by taking the limiting case of $dt\to 0$ we get that acceleration points towards the center.

Any force which is always perpendicular to velocity will not change the velocity. One way to look at it is that $\vec F\perp \vec v\implies F\perp \vec v\cdot dt\implies\vec F\perp d\vec x$, and as work is $\int \vec F\cdot d\vec x$, work done becomes 0 and thus there is no change of kinetic energy (and no change in net velocity).

Without resorting to physics, if velocity is $(v_x,v_y)$, acceleration will be $(cv_y,-cv_x)$. We get the two differential equations:

Substituting the values of $\frac{dv_x}{dt},\frac{dv_y}{dt}$ from the first equation,

I guess this question arises from the misconception that acceleration leads to a change in speed. It doesn't have to. Acceleration is a vector quantity, as is velocity. Acceleration changes the velocity of a body -- the direction, magnitude, or both. It is perfectly OK for a body to accelerate without speeding up.

You can think of it in terms of kinetic energy:

For a particle to gain kinetic energy, work must be done on the body. Work is defined as $$W=\int \mathbf{F} \cdot d\mathbf{x} $$

If the motion is only approximately circular, like the planets going around the sun, the body will speed up and slow down as it goes around.

Let us consider the function $f(x)=\frac{x-3}{x-3}$. You might get the urge to say $f(x)=1$ but this is not correct: for $x=3$ this function is not defined. There is no sensical number to assign to $\frac 0 0 $. But if you look at points near $x=3$ there is a number that would make sense. We could define $f(3)=1$. Limits are a formal way to extend functions to points where they are not defined based on how the function behaves around that point. Formally we can write $$\lim_{x\rightarrow3}\frac{x-3}{x-3}=1$$ What this means is that if $x$ gets closer and closer to 3, the function $\frac{x-3}{x-3}$ gets closer and closer to 1. In this example 'getting closer' is a bit of a misnomer because it stays at 1 but you get the point. The nice thing about limits is that it doesn't depend on the point that is behaving badly. It only depends on the neighbourhood of the point.

We can make $\Delta v$ go to zero by letting $\Delta t$ go to zero, but the acceleration is still well defined. It is $a=2kt$ which you could check if you'd knew how to work with limits. The limit takes care of the badly behaved $\frac 0 0$.

The last paragraph can also be written like this: you don't get the acceleration by dividing $\frac 0 0$, you get the acceleration by taking $\frac{\Delta v}{\Delta t}$ and looking what happens as $\Delta t$ gets closer and closer to zero. In most functions the fraction $\frac{\Delta v}{\Delta t}$ gets closer and closer to some particular value. Taking the limit means that you take this value and put it as your answer. You don't need to know what happens when $\Delta v,\Delta t$ are exactly zero, you only need to know what happens when they get close to zero.

I will try an intuitive approach with a different referential.

Assume you are a test mass particle travelling in deep space and assume that the massive bodys are far away. The gravitational field is constant everywhere around you, and you will maintain the state of motion you have, velocity vector (vv). In this case the gradient of the grav field is 0 (Newton's first law of motion) and you feel no force at all. You can picture the space with a constant gray color.

Now you are approaching a massive body and the grav field around it shapes the space in a way that the paths of constant field are circular (2D is enough).
You can picture the space with black color in the star and a progressive lighter gray as distance increases.
You know that if your motion is such that you follow the same color (constant field) you wont feel any force and you will maintain the same state of motion in relation to the field. You can use a referential centered on you (alligned with the field) and in that special referential the velocity vector is constant and you have null acceleration (you vv is always parallel to the same constant color). In any other referential, namelly the one centered in the star, the velocity vector is not constant.

If you are travelling with too much speed you know that you will escape and go away with a different escape direction - you win.
If too slow you will plunge into the star - the star wins.
Circular uniform motion is a tie (win-win) is to ride a specific color (i.e. potential) and you must possess a specific state of motion (use the formulas from other answers) otherwise you will feel a force on you.

An example from surf:
you are in a beach and can describe the complicated motion of a particular point in a wave and the surfing guy that is riding that wave (this is the referential centered on the star). If your eyes are attached to the wave (above the ref is attached to the field) you will see the surfer as immobile and the same if you are the surfer looking down to the wave (the ref is attached to you).
Of course to ride the wave the good surfer had approached it with the correct direction and speed. If too slow the wave is missed if too speedy he crosses the waves like a boat.

2
How does centripetal force changes the direction of velocity? Isn't it a violation to Newton's second law of motion?