Why don't the Earth's oceans generate a magnetic field?

Many questions have been asked here about why the Earth has a magnetic field, e.g.,

At the risk of oversimplifying a bit, the answer is the dynamo theory. Convection in an electrically conductive, rotating fluid – in this case, the molten metal in the planet's core – creates electric currents that, in turn, generate a magnetic field.

Why doesn't the same thing happen in the oceans? A large ocean like the Pacific would appear to have all of the general properties required for a dynamo. It is made of conductive saltwater; it has significant bulk flows (indeed, ocean currents are much faster than convective currents in the core); and it rotates with the planet. Is the higher resistivity the key difference? If so, would a saltier ocean be able to generate a magnetic field?

The earth's oceans do in fact generate a measurable magnetic field$^{[1][2]}$. As you have already pointed out, the motion of charged particles generate magnetic fields, so it makes sense that the earth’s oceans would do the same. In fact, the oceans make a contribution (albeit a small one) to the Earth's overall magnetic field.

In the image below, we see how this magnetic field is distributed about the northern hemisphere with the United States and Canada in the center of the sphere, and how its strength varies at different points. The European Space Agency in 2013 launched three satellites, a system called Swarm, which was designed to study the earth's magnetic field in detail and was also used to map the magnetic field emanating from the oceans. 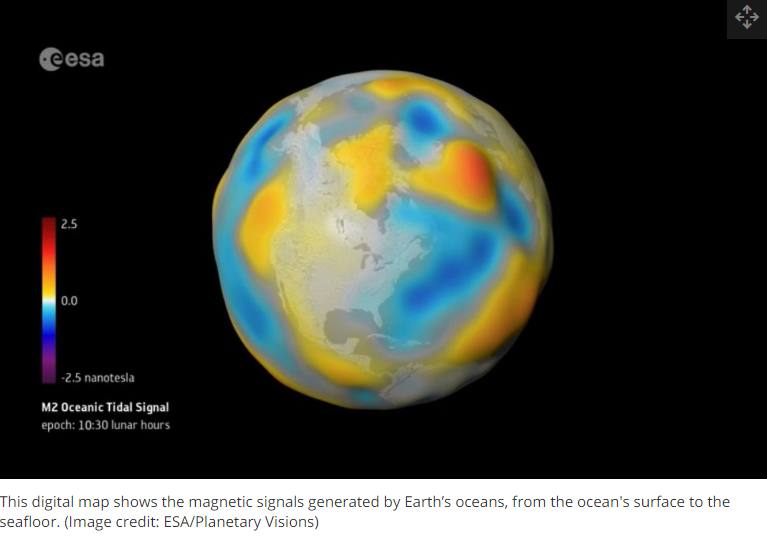 As joseph h said, the oceans do have a contribution to the magnetic field, and the reason that this contribution is small is just that the oceans are very thin compared to the Earth's radius. As a result, any vertical convection currents don't have a chance to pick up enough Coriolis force to drive a self-sustaining dynamo.

There are no other bodies in the solar systems with oceans that act as full dynamos either, although especially for some Jovian moons the sub-surface oceans do have a quite marked magnetic interaction with Jupiter's magnetosphere. This is particularly notable for Europa, which does not have a liquid-core dynamo, whereas Ganymede does also have a dynamo core similar to Earth's.

The closest thing to an ocean-dynamo we have in the solar system are Uranus and Neptune. Both have significant intrisic magnetic fields (and magnetospheres), but the fields are very different from Earth's, Jupiter's or the Sun's – namely, they aren't dipoles to any reasonable approximation. The probable reason is that the active dynamo region is much closer to the “surface” than in case of Earth, and the relevant flowing material would have to be some combination of water, ammonia, and various ions.

Schilling et al. 2007: Time-varying interaction of Europa with the jovian magnetosphere: Constraints on the conductivity of Europa's subsurface ocean

Not the answer you're looking for? Browse other questions tagged electromagnetism fluid-dynamics geophysics geomagnetism magnetohydrodynamics or ask your own question.

33
Why does the Earth even have a magnetic field?
5
How can an electrically neutral planetary core be geodynamo?
16
What is the source of Earth's magnetic field?
8
How does Earth's interior dynamo work?