Examples of phase transition nuclei whose dynamics impede their own growth?

I recently asked a question over on the Earth Science stack exchange about cumulus cloud formation from (roughly) point sources. These points can form around the same time across large areas, such as this example of 10-15 appearing all around Mississippi, pulled from GOES-East satellite data:

or this example from the same source and date in Guatemala:

It's likely these point sources are thermals, warm updrafts that form over heated ground. The warm air rises and cools as it expands in lower-pressure surroundings, then sinks again along the outside of the column, as in this image from Wikipedia of the plume thermal model: 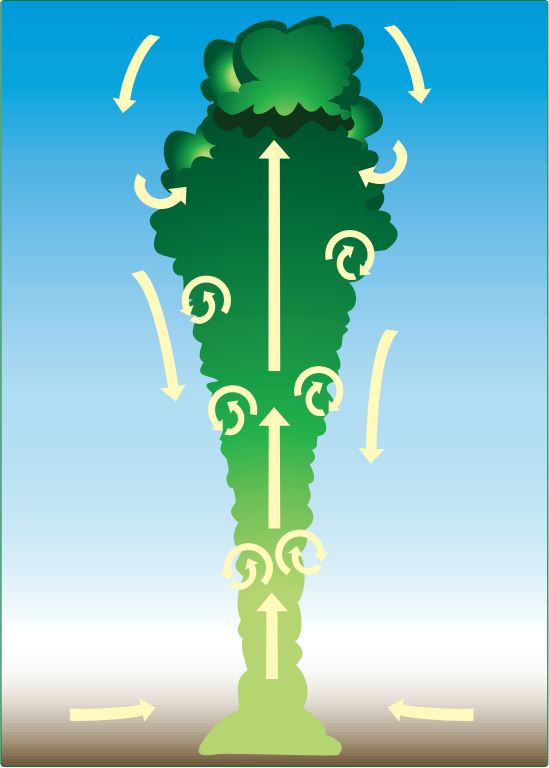 To summarize in physics language: a medium is brought near a phase transition, but the nuclei that form are able to, to some extent, self-stabilize against further growth in area. That is, their own dynamics act to impede their further growth.

Of course, this stability is partly due to the system being near criticality. If it were brought above its critical temperature (holding other parameters fixed), the thermals would grow. This is true of many (all?) systems near a phase transition. But if thermals lacked their boundary -- the cooler air sinking around them -- they would grow anyway! (And decrease in intensity, unless the incoming solar energy was strong enough.)

So my question is: what other examples are there of phase transition nuclei whose dynamics somehow impede their own growth?

Many crystals grow once started, but they can be difficult to start.

Water has a number of unusual properties. One is the ice is less dense than water. Suppose you have pure water. Neighboring water molecules attract each other when separated. When too close, they repel. You can describe this as a force, or as potential energy. There is a distance where the potential energy is a minimum.

In liquid water, molecules have a fair amount of kinetic energy. Water is continually forming small ordered groups. But they immediately break up. 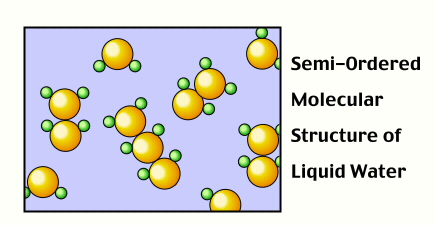 It is similar in ice crystals. The molecules fit in a different, more separated, configuration. There is a different, lower, minimum potential energy. This structure is stable at low temperatures. But at higher temperatures, the kinetic energy of the molecules is strong enough to break these bonds. 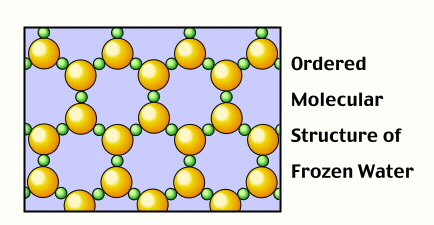 And yet, ice does not form at this temperature. In fact, it is possible to super cool water - to cool it below $0$ C in its liquid state. Once ice starts forming in super cooled water, the water freezes instantly. But something can prevent it from starting to form ice crystals.

When bulk ice meets bulk water, almost every molecule is in the interior of ice or water. Relatively few are right at the surface.

Right at $0$ C, ice and water are in equilibrium. As many molecules are ripped out of the ice and become water as freeze out of the water to become ice. At a little lower temperature, it is more likely for water molecules to freeze into the ice. The ice grows.

But what if there was no ice and the temperature dropped? Small ice like structures continually form randomly. These contain perhaps dozens of molecules in an ice like solid. But in a small sphere or similar blob, few molecules are in the interior and many are at the surface. The energy of such a blob is high. It quickly falls apart into a liquid.

Ice cannot start forming until a blob forms that is so big that low energy of the larger interior overcomes the high energy of the surface. Once this happens, the solid will grow.

This can happen a number of ways. First the temperature can drop so low that the solid form is strongly favored over liquid. Even a small blob can overcome the surface energy.

Second, water might be in contact with a surface. Even if the surface does not strongly attract water, it might have imperfections or impurities where the attraction is stronger. A blob can form there without so big an energy penalty.

Third, simply disturbing the water, for example shaking it, can help the momentary formation of a larger blob.

This example has talked about water, which is an unusual substance. But many substances can have similar behavior nucleating crystals.

Not the answer you're looking for? Browse other questions tagged phase-transition critical-phenomena weather or ask your own question.

19
Why does water contract on melting whereas gold, lead, etc. expand on melting?

1
How can I detect a phase-transition in a molecular dynamics simulation?
0
How to simulate a phase transition in Molecular Dynamics?
1
Renormalization group: Why is the correlation length only given by 'slow' modes
41
Why do small patches of snow remain on the ground many days or weeks after all the other snow has melted?