What do people actually mean by "rolling without slipping"?

I have never understood what's the meaning of the sentence "rolling without slipping". Let me explain.

I'll give an example. Yesterday my mechanics professor introduced some concepts of rotational dynamics. When he came to talk about spinning wheels he said something like:

Well, what I really don't understand is this: is the "rolling without slipping" condition defined as "Point at the base has zero speed"? If not, what's the proper definition for that kind of motion?

Looking across the internet, I have found more or less the same ideas expressed in the quotation. Furthermore, if it was a definition, then it would be totally unnecessary to say "convince yourself" and improper to talk about necessary and sufficient conditions.

I'd like to point out that I'm not really confused about the mathematics behind this or with the meaning of the condition above. What puzzles me is why are those explanations always phrased as if the condition $v'=0$ (where $v'$ is the relative velocity beetween the point at base and the surface) is some necessary and sufficient condition to be "rolling without slipping". Seems to me that this is exactly the definition of "rolling without slipping" and not an "iff".

Any help is appreciated, thanks.

You can always decompose a motion like this into two parts: (1) rolling without slipping and (2) slipping without rolling.

What is slipping without rolling? It means the object moves uniformly in one direction along the surface, with no angular velocity about the object's own center of mass. For instance, a box that is pushed along the ground can easily slip without rolling.

Unfortunately, most people seem to assume that you can infer some physically important information from your own notion of what slipping is, without having to define it. I believe this is done to try to connect to intuition, but in the process, things get a lot more nebulous and ill-defined.

To me, it's easier to think about this in terms of the object's rotation--it was never obvious to me that the point in contact with the ground doesn't have velocity at the instant it touches. I prefer to think instead that an object that rolls without slipping travels 1 circumference along the ground for every for every full rotation it makes. And object that travels more than this distance (or that doesn't rotate at all) is slipping in some way.

Then, eventually, we can get to the notion that the point in contact during rolling cannot have nonzero velocity through whatever logical or physical arguments necessary.

But as is usual in physics, it's not really clear what definition should be considered "fundamental" with other results stemming from it. This emphasizes that physics is not built axiomatically.

The above answers are all good but i want to give another example which really helped me with understanding what does it mean that the point of contact has a velocity of zero.

Think of the 'spinning circular object' not as a ball, but instead think of it as a star polygon with an infinite amount of edges, for the sake of the example a very large number will suffice - 9 edges

Another nice example is the human cartwheel, but it has 2 points touching the ground at the same time, which is why i like it less...

This is why wheels are good for transporting things, as a result of the contact point not moving only the static friction force is working on the wheel, and static friction maintains conservation of energy.

I hope this gives another point of view to anyone googling the subject and running into this question...

So far the explanation is correct. "No slipping" refers really to some non-zero interval of time, and to the state of the contact faces during this time. When there is no slipping the faces can exert greater tangential force on each other than in the state of sliding, and there is no loss of mechanical energy involved.

This can happen when two bodies are in physical contact for some non-zero time and the parts in contact have the same velocities during that interval.

It is not good to define no slipping just for an instant via the requirement that $v' = 0$ at that instant, because that can happen even if the bodies slide on each another at all other instants.

So the wheel is rolling without slipping if and only if the point at the base has velocity zero,

the word "so" is not very good here, and it should be added at the end that "contact point has velocity zero _all_the_time". Then it is OK.

It is interesting though that in practice there seems to be no case of perfect no-slip rolling. There is always some slipping and hence friction involved, even the train wheels on rails do slip a bit. The no-slip condition is thus a convenient approximation.

The short answer is that yes, the definition of "rolling without slipping" is that the velocity is zero at the point of contact.

The longer answer is that definitions in physics are not quite the same as definitions in mathematics. In physics, one often starts with concepts that are physically meaningful, even if not completely precise, and then seeks to develop a mathematical model to understand the physical world. "Rolling without slipping" is something that we have an intuitive physical understanding of, but to study it precisely, we have to cast around for a mathematical definition that captures our intuition—if not with 100% fidelity, then at least with enough accuracy that we can do meaningful calculations and make testable predictions.

"Rolling without slipping" turns out to be unexpectedly tricky to model mathematically. It is tempting, as Muphrid suggests, to define it by saying that "an object that rolls without slipping travels 1 circumference along the ground for every for every full rotation it makes." Unfortunately, as noted in a comment, this definition fails to capture our intuition when we roll a disc along a curved path. The famous coin rotation paradox makes this clear. The outer coin makes a full rotation after traveling only 1/2 a circumference along the "ground" (the perimeter of the inner coin).

Another tempting idea is to define rolling without slipping in terms of a continuous one-to-one mapping of the points on the circumference of the wheel and the points on the surface on which the wheel is rolling. But once again, we run into a problem, this time with Aristotle's wheel paradox. With two concentric wheels, one can set up a situation where both the inner and the outer wheel are simultaneously rolling on separate surfaces, in such a way that there is a continuous one-to-one mapping for both wheels, but intuitively, it is not possible for both wheels to be rolling simultaneously without slipping.

The zero-velocity definition correctly captures our intuition about rolling without slipping in both of these cases (as well as in other cases), so that is why it has been adopted as the formal definition.

And don't worry , this is a normal thing to be confused upon . Almost everyone gets confused here .

Just remember velocity is $0$ at an instant , but acceleration is still there , meaning it can move at later instants of time . Like a block performing SHM at extreme position is at rest at an instant , but that doesn't mean it'll remain at rest , however in pure rolling it happens that at each instant there is point whose velocity gets $0$.

A physical scenario will help you visualise some of the other answers, particularly Muphrid's and nonagon's.

Imagine an aeroplane coming in to land, as a wheel of its landing gear touches the ground. If the tyre isn't spinning before contact, the point of contact on the tyre is moving at the same speed as the aeroplane, approximately $70{\rm m\,s^{-1}}$, and so the rubber is dragged along the ground at this speed, and there's a huge skid with heaps of smoke. Naturally, a huge torque on the wheel results and its angular velocity swiftly rises until there is no more skidding.

In practice, however, many planes' wheels are spun by motors so that there is less skidding.

To understand rolling without slipping, first consider the case of rolling only case about the center of mass.In this case, a point on the top rim will have a speed $v=\omega\cdot R$ and a velocity $v=-\omega\cdot r$, at bottom of the rim, as observed by you. However in case of rolling without slipping, We observe the velocity of center of mass is $v$ (only translational) and velocity at the top rim is translational and rotational is equal $v+\omega R$ and velocity at bottom, at contact, is $\omega R-v$ (translational and rotational).

Remember, $v$ here is the velocity of center of mass. Since $v=\omega\cdot R$, we conclude the velocity at contact is zero and at top is $2\cdot v$.

The formal definition of rolling without slipping is the following:

Suppose you have two (rigid) bodies in mutual contact between each other. There are three different points at the point of contact: one of them (namely A) is a material point and belongs to the first body, the second one (namely B) to the other body, and the remaining one is the geometrical point. Of course, since the two bodies are in mutual contact, all these three points are at the same place at that moment.

Rolling without slipping ocurrs when the velocity of the material points (A and B) in contact are the same for any time.

Example: a disc (center O, point of contact P, radius a) rolling without slipping on a table.

Let x denote the coordinate of the center of mass. Using distribution of velocities for a rigid body and rolling without slipping, we have:

This is what's usually found on introductory physics courses: the velocity of the center of mass is equal to w (angular velocity) times a (radius).

To sum up: in your example since the ground is -of course- at rest, then the velocity of the point at the base of the wheel is 0. Altough that's not the definition of rolling without slipping.

Physics works, and rigorous definitions exist. It's just a matter of finding them.

The relative speed of the point of contact of the rolling body w.r.t. the surface on which it rolls is zero. 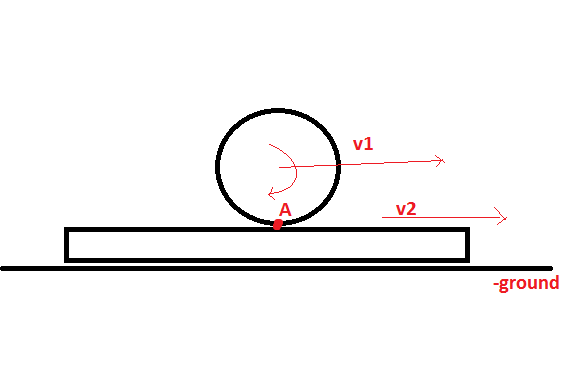 Where $\alpha $ is the angular acceleration.

A wheel rolls without slipping when the distance covered by the wheel on the road is the distance a fixed point on the wheel moves. If it slipped, the latter distance would be greater.

A number of commentators have said that this is when the relative instantaneous velocity vanishes. This is equivalent to the above and so can be derived from the above. Personally, I find the definition above much more intuitive than the instantaneous definition.

watch the following video for a great explanation: http://www.youtube.com/watch?v=xbXsSEtbkzU

and read this article for the interesting causes of rolling resistance/friction: //www.school-for-champions.com/science/friction_rolling.htm

Not the answer you're looking for? Browse other questions tagged newtonian-mechanics rotational-dynamics definition rigid-body-dynamics or ask your own question.

4
How far does a ball thrown over a surface with friction slide until it starts rotating?
1
Contradiction regarding friction of a rolling cylinder in an inclined plane
-1
Does rolling without slipping or pure rolling mean friction is not acting?
0
Concept of velocity of center of mass
0
Conservation of Energy with Rotation Caused by Friction