Tension in a closed loop around an object, carrying stuff

Sorry when this sounds like a first year physics homework question, but it's actually not. It arose during a discussion regarding safe practices for rock climbing anchors...

So here we go: Imagine you have a closed loop (a sling) around an object such as a tree. Let's for the moment assume the tree to be frictionless and a cylinder of radius $R$.

You attach a load (via a carabiner, but it doesn't matter here) to that sling. It's pulling away from your tree with force $\vec{F}_l$. Now my question would be: What's the tension in the rope given the angle in the rope at the attachment point.

Well... I know the carabiner in equilibrium isn't moving, so the force $\vec{F}_l$ must be balanced by forces coming from the sling. I can draw the parallelogram of forces. Let's assume I already know the angle that the sling forms at that point. My confusion stems from this: Because I have a closed loop, should there be some sort of "back action" from the tension in one leg of the loop on that on the other leg?

Also, it should be obvious that the sling exerts force on the tree, but if I only look at tension, which runs in the direction of the rope, I can't really tell where that force is coming from.

I must confess, back in my first year in physics I'm not even sure we properly did discuss more advanced situations regarding rope tension. It was always the good old frictionless pulleys introducing $90$ or $180$ degree turns...

EDIT: Here's an attached image. The left one shows the setup I'm interested in, the right one shows a situation that I'd know how to solve... 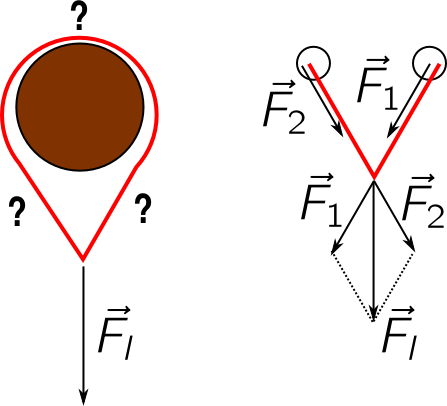 Because I have a closed loop, should there be some sort of "back action" from the tension in one leg of the loop on that on the other leg?

Cool question. About the "back action." Imagine, instead of a smooth cylinder, a cylinder with a thin, rectangular bump directly opposite the point that the load hangs beneath (on the top part of the cylinder.) Also, instead of a circular rope which stretches all the way around, picture a regular, two-ended rope which stretches around the underside of the cylinder (that is, the load side), but where each end of it is joined to one side of the bump, on the top.

In this case, there cannot be any back action. But this is the same as the case you describe. Let us illustrate. First, we can cut the bump from the cylinder -- nothing will change, as there is no net force upwards or downwards acting on the bump. Second, we can replace the bump with a piece of rope, and voila -- this is just a rope stretched all the way around.

Since tension only comes from forces acting parallel to the direction that the rope is stretched, and the normal force from the cylinder is always perpendicular, there can be no contribution to the tension from the cylinder.

Also, it should be obvious that the sling exerts force on the tree, but if I only look at tension, which runs in the direction of the rope, I can't really tell where that force is coming from.

The rope now pulls down on the limb a weight equal to the weight of the load (if we take the mass of the rope to be negligible.) The pressure on the cylinder does not come from the tension in the rope.

Not the answer you're looking for? Browse other questions tagged newtonian-mechanics statics or ask your own question.

8
Understanding tension
0
How does the masless pulley gets the force from rope?
0
Why is the tension between two masses connected by a rope and undergoing a force along the direction of the rope less than that force?
0
Breaking strength of cord when doubled over a pulley
0
Determining tension in a rope between two masses using only force arrows (i.e. no calculations)
0
How does acceleration carry over when the tension force is at an angle?