Would something in the center of a supermassive shell be pulled apart or remain stationary?

Imagine a supermassive hollow shell in space, and also imagine there is an object at the center of this shell. How does the force of gravity affect the body inside the shell?

My reasoning is that the shell will pull outward on the body equally in all directions. Now do the forces cancel out essentially doing nothing to the body or will the forces act to pull the body apart? The essence of my question is whether or not two opposing gravitational forces cancel eachother or if they act together to "rip apart" something.

As an analogy, if I pull equally hard on two sides of a rope the rope would experience two equal and opposite forces but would still get ripped apart if I pull hard enough. Does gravity act in the same manner?

Here's a crudely drawn diagram of the setup: 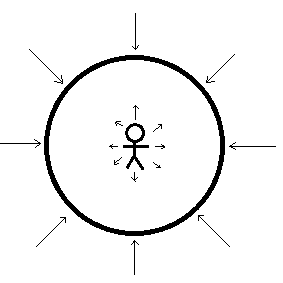 The object at the center is not necessarily a human, consider a small non-massless particle.

The net gravitational force on any mass inside a spherical shell is zero. This is a consequence of Newtons' shell theorem. As per this link it states

"In classical mechanics, the shell theorem gives gravitational simplifications that can be applied to objects inside or outside a spherically symmetrical body. This theorem has particular application to astronomy.

Isaac Newton proved the shell theorem and stated that:

This means there will be no net force on the body, and it will not be torn apart.

As an analogy, if I pull equally hard on two sides of a rope the rope would experience two equal and opposite forces but would still get ripped apart if I pull hard enough. Does gravity act in the same manner?

No. As explained above.

Not the answer you're looking for? Browse other questions tagged general-relativity gravity spacetime metric-tensor symmetry or ask your own question.

55
Is spacetime flat inside a spherical shell?