Question about current from moving line charge in Griffiths' Electrodynamics

On page 217 of the 2013 version of Griffiths' Electrodynamics textbook, he says "A line charge $\lambda$ traveling down a wire at speed $v$ constitutes a current". 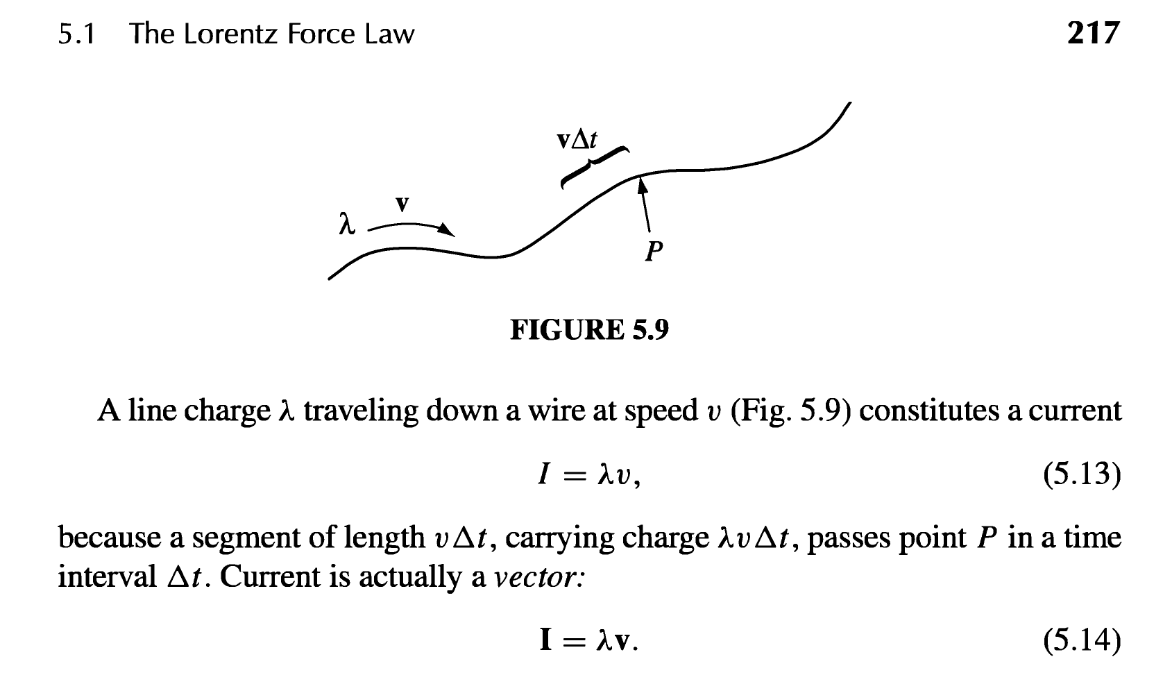 $\lambda$ traveling down a wire at speed $v$ constitutes a current" />

I am confused what it means for a line charge to be moving, since it seems that $\lambda$ doesn't depend on time.

Later on, Griffiths' says that "the charge density $\lambda$ refers only to the moving charges. I don't really understand what he means here, and I think this might be the problem.

Any help would be appreciated, thanks!

Yeah, so, this is a reasonable confusion.

In electromagnetism, the electric and magnetic fields are generated not just by charged particles existing, but also their motion through space. This means that there is a difference between a ring of charged particles standing still (electric field but no magnetic field) and that same ring spinning about its axis (both electric AND magnetic fields) even though the charge density in space $\rho(\mathbf r, t)$ is completely stationary and is the same in both cases.

Put another way, $\rho(\mathbf r, t)$ is not in general sufficient to determine $\mathbf J(\mathbf r, t)$, which is the source of the magnetic field. It can be if we are tracking isolated charges that never collide, but once we start averaging those together into a charge density, or once they collide or so, we lose this. Bottom line: Magnetostatics are static in the sense that $\rho(\mathbf r, t)$ and $\mathbf J(\mathbf r, t)$ are independent of time, not in the sense that $\mathbf J$ is zero: so you are studying either loops of current or else currents coming in from, and going back out to, infinity. Indeed, in the most common cases, you want to have current running through a solenoid for example: you don't want the wire to have any net charge at all! $\rho=0$ but $\mathbf J\ne 0.$

Another rough analysis comes from relativity, it says that if you have a neutral wire that goes off to infinity carrying a negative current of electrons, then when I Lorentz-boost along that current I should see those electrons become stationary, and the inverse current should instead be carried by the positive charges moving backwards. “So what” you might say. Well, Lorentz boosts come with length contraction. Specifically, the electrons were contracted when moving and now appear uncontracted, while the nuclei are now contracted: the wire now has a positive charge in this frame. And so if you imagine that I'm holding on to an electron at this speed, it feels an attraction to that other wire through the electric field. And ultimately this is the relativistic reason why like currents attract: that electric field becomes the magnetic field in the original frame, which of course had $\mathbf E=0$ as it had $\rho=0,$ a neutral wire. So I clearly have to specify something about how things are moving in relativity: because whether a charge on a wire is zero or non-zero is not a Lorentz invariant.

$\lambda$ here is the line charge density defined as $$\lambda=\frac{Q}{L} $$ Hence, it gives charge per unit length. Therefore, to get current for some infinitesimal length one must multiply by $dl$ and divide by $dt$, which is equivalent to $v$ in your case.