I'm having quite the problem connecting all these concepts, so apologies for the lengthy post.

Let $\psi$ denote a complex field. Then, after quantization, we'll have $\psi(x)$ and $\psi^{\dagger}(x)$ which will now represent field operators. They can be expanded in Fourier modes as

Then, one can define Feynman propagators as

where $T$ is the time ordering operator. If $y^0 < z^0$, then this propagator represents the creation of an antiparticle at y and its propagation and annihilation in z. If $z^0 < y^0$, then it represents a particle being created and then annihilated.

For simplicity's sake, let us consider the following Lagragian:

where $\phi$ is a real field for $\pi$ mesons of mass $m$, and $\psi$ is a complex field for spinless nucleons, $N$, with mass $M$. It is clear to me that the interaction between fields is

Since $\psi$ is a complex field, it should, in theory, describe both 'nucleons' and 'antinucleons', according to the introduction above.

Now, let's consider the diffusion process $N + \pi \to N + \pi$. If one decides to study the differential cross-section, the amplitude matrix $\mathcal{M}$ shall be needed, which can be obtained from Feynman rules. According to some notes and books I've consulted, the vertex should be 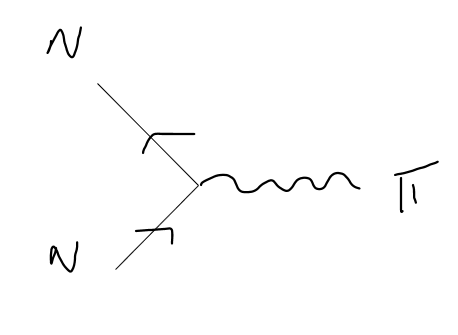 which, considering that time runs from left to right, seems like a nucleon joining an anti-nucleon in the vertex (arrows denote CHARGE FLOW).

After tweaking with this toy model, the only Feynman diagram I could obtain for this process was

I hope you can help me clear these confusions.

A second piece of advice is that arrows on lines only denote the flow of charge ($q$). So as a first modification, I would redraw the wiggly lines to have no built-in arrow. The flow of momentum ($p$) should be denoted by arrows that are offset from the lines. This leads to:

Note that some textbooks omit the $p$ arrows and promise that whenever the $p$ directions they have in mind disagree with the $q$ directions, they will indicate this by putting a bar over a label like $N$. This is bad... don't do this.

So when you first draw the diagram, there is nothing to worry about yet in terms of where the nucleons and anti-nucleons are. This comes when you add the extra set of arrows. Then you just have to interpret it. The correlation function related to your scattering is $\left < \psi(x_1) \phi(x_2) \psi^\dagger(x_3) \phi(x_4) \right >$. Choosing tree level means you turn it into \begin{equation} \int dy_1 dy_2 g^2 \left < \psi(x_1) \phi(x_2) \psi^\dagger(x_3) \phi(x_4) \phi\psi\psi^\dagger(y_1) \phi\psi\psi^\dagger(y_2) \right >. \end{equation} Drawing the diagram means the 10pt function in the integrand gets split up into one of the contributing products of 2pt functions (propagators) via Wick's theorem. In this step $\psi$ always goes with $\psi^\dagger$. Finally, adding the momentum arrows means you turn the correlation function into a scattering amplitude by "amputating" the external lines with the LSZ formula. Essentially replacing the fields with $a, a^\dagger, b, b^\dagger$ as appropriate.

Not the answer you're looking for? Browse other questions tagged quantum-field-theory scattering feynman-diagrams interactions wick-theorem or ask your own question.