im quite lost somehow. I know this is a really basic thing and I know I should be able to do it, but something is going on with me and I tend to have problems with everything these days. Anyway:

I want to determine the characteristics of a Spatial Light Modulator (SLM). Linear Polarized light was pointed on the SLM. After the SLM an anylyzer was put between the SLM and a photo diode which was used to measure the intensity. In the lab, a program changed the gray value A periodically from 0-255, which was translated, by the same program, to change the crystal orientation. One cycle took 4.1s Since the orientation determines the phase difference between ordinary and extraordinary beam, this results in different polarizations of the exiting light. Because of the analyzer the Intensity of the light, hitting the diode, changes as a consequence.

The diode was then connected to an oscilloscope, recording voltage over time.

The point where A=0 could be seen in the data, because when the crystals reach the position corresponding to A=255 there is a small "dead time" before its orientation reaches the A=0 position again. 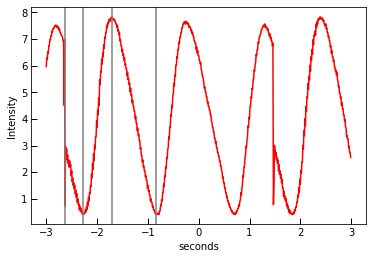 The left horizontal line in the picture above.(And also visible at 1.5-ish).

However when I try to fit the data with curve_fit(...) the it doesn't work at all. 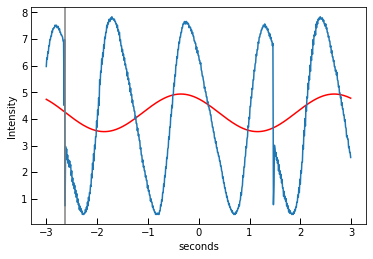 The x data used in both pictures above are the recored times by the oscilloscope. The y date used for the fit are the measured voltages.

If I generate a vector A(t) which holds values of Grayvalue determined by the position of the x(A=0) and the knowledge of one cycle being 4.1s long. I get even worse results.

Does anyone have an advice what to do?

Hope you'll have a great weekend!

Not the answer you're looking for? Browse other questions tagged optics visible-light experimental-physics computational-physics fourier-transform or ask your own question.

1
Is 'color' characteristics of a body or characteristics of light?
2
Is there any review paper on spatial light modulator?
130
Why is the vibration in my wire acting so oddly?
1
Light variation around a point source
0
Why photodiode measures random phase superpositions on continuous-wave (10kHz) white light?
0
Spatial Light Modulator (SLM) phase-only versus amplitude-only modulation