Why does the gyroscope oscillate a little when it just starts to precess?

I was reading up on why before starting the precession the gyroscope "goes down a little", (Link at the bottom). In this paper, while looking at the graphs I observed that before reaching the steady-state precession in the transient state the gyroscope oscillates a bit (up and down oscillation), before damping out and simply precessing about the vertical axis, as you can see in the attached image from the same paper. 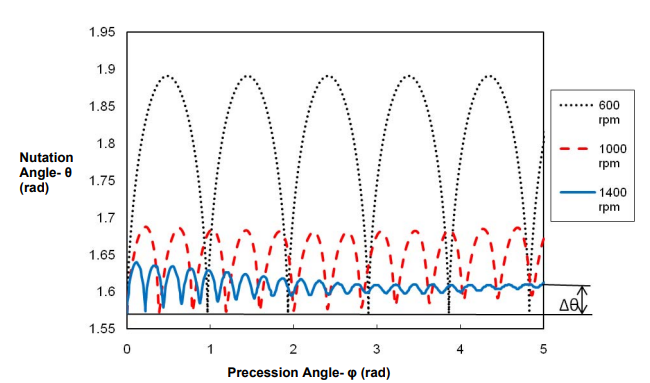 Q: I didn't understand why does the gyroscope oscillate (up and down) during that transient phase (damped oscillation)? And what is the restoring force acting in that oscillation?

When a demonstration of gyroscopic precession is given the demonstrator will invariably release the gyroscope gingerly. This is not done on purpose, it just feels natural to do so.

However, by releasing gingerly nutation is suppressed. What in fact happens is that the demonstrator is providing critical damping. (Critical in the sense that nutation cycles are prevented but not the settling into steady gyroscopic precession)

Svilen Kostov and Daniel Hammer opted for a sudden release. One moment the gyroscope is still supported, the next moment they just flat out drop it.

When you do a sudden release of a (spinning) gyroscope you get that nutation: that is what a gyroscope will always do.

In actual demonstrations the students rarely if ever see the nutation because invariably the demonstrator releases the gyroscope gingerly.

I have an hypothesis:
When a teacher demonstrates behavior of a gyroscope he is suppressing the nutation all the time because he feels that the nutation is some whacky disturbance.

In actual fact the nutation is the key to understanding gyroscopic precession.

[Later edit]
Kostov and Hammer write:
"In the end, Feynman dispels the “miracle” of the purely precessional motion by bringing nutation (the wobbling part) into the picture as the mechanism by which some angular momentum is transferred from the horizontal to the vertical direction."

In physics there is always a judgement call as to what to regard as the essence and what to regard as collateral effects. In, for example, a demonstration with an air track the demonstrator will announce that any effects from air resistence will be ignored.

In the case of onset of gyroscopic precession the phenomenon of nutation is inherently involved. In the it-has-to-go-down experiment the setup is designed to obtain a significant nutation; large enough for quantative analysis.

If it would have been possible to conduct the experiment under frictionless circumstances then the nutation would have persisted indefinitely.

The actual motion of the gyroscope (in the it-has-to-go-down experiment) is a superposition of two motions: nutation and gyroscopic precession. The nutation is a motion where the spin axis rapidly sweeps out a cone with a small angle. In the graph provided in the paper the up-down component of the nutation motion is most visible, but it has to be emphasized: the nutation motion has circular symmetry: the spin axis is sweeping out a cone (a cone with a small angle).

In real world circumstances there is always some friction, and so both the nutation motion and the gyroscopic precession motion decay. The nutation motion, being the faster motion, decays faster than the precessing motion.

The quickest way to go from release to steady gyroscopic precession is to provide friction in the vertical direction only. That way there is no friction component that opposes precessing motion, while at the same time suppresssing nutation motion.

A complete nutation cycle goes through a full circle. With sufficient vertical friction the nutation can be suppressed to moving through only a quarter of a circle: the center of mass of the gyroscope goes down and the nutation process transforms that vertical motion into sideways motion.

(This 'one quarter of a circle' must not be taken literally. The actual motion won't be precisely that shape. What matters is the transformation process: initially moving vertically, yielding to the torque, and that motion gets transformed to horizontal motion, the steady gyroscopic precession.)

By habit physicists will tend to ignore the nutation, mis-classifying nutation as 'non-essential'.

Not the answer you're looking for? Browse other questions tagged angular-momentum torque oscillators gyroscopes precession or ask your own question.

7
Without using rotational mechanics, why does a gyroscope precess the direction it does?
21
Why does a spinning top get back upright when knocked?
40
Why does my ID card oscillate sideways when walking?
1
Why does gravitational torque on a precessing gyroscope turn the spin momentum instead of making the gyroscope fall?
1
Why does the gyroscope not move upwards?
4
Confusion about what happens when the rotating axis of a gyroscope is rotated
3
Which way does a symmetric top precess and why?
0
Why does the axis of spinning tops rotate about a vertical axis?
1
Why don't the electrons in a paramagnetic material precess around an external field?
40
Why does ponytail-style hair oscillate horizontally, but not vertically when jogging?