Why is angular momentum a vector?

I have read a bit about this and am still wondering why we actually care about the direction of angular momentum, because that the vector representing angular momentum is perpendicular to the momentum vector and the position vector doesn't really have any deeper meaning. Is it defined as a vector to keep it consistent with the definition of linear momentum or what is the deeper explanation behind this?

This answer elaborates on the answer-in-a-comment by Chiral Anomaly.

The precursor to the concept of angular momentum was Kepler's law of areas.

As we know, to define an area - using vectors as elements - you need two vectors.

As pointed out by Stack Exchange contributor Chiral Anomaly, if the motion is in a space with 4 spatial dimensions, or 5, or any higher number of dimensions then the only way to specify angular momentum at all is with two vectors.

A space with three spatial dimensions has a property unique to space-with-three-spatial-dimensions: every plane has a single vector that is perpendicular to that plane.

So: the convention of using a single vector to represent angular momentum is a hack, a hack that only works in a space with three spatial dimensions.

There is a problem though: the direction of the rotation is ambiguous. This problem would not be there with a notation using two vectors, but when you use a single vector to represent angular momentum then there is not enough capacity to represent all the information that needs to be represented.

And in fact, through this definitions, we get a lot of simple and elegant formulations of physical laws.

At the highest level, you can just treat it as a simple, mathematically compatible way to keep track of the handedness of the rotation. After all, it's a easiest to handle "lines" and it's easier to handle one "line" than a bunch of tangential "lines" which make up a "circle".

The direction along line and a circle both only have two opposite degrees of freedom and just happen to work. Math is like that sometimes. You can transform things so they are not directly comparable to the real thing but still mathematically equivalent. The closest simplest description is that the vector is the axis of rotation but the fact that the direction that it points in corresponds to direction around which the axis rotates is just something that happens to work out mathematically, and if explainable probably requires delving into some crazy math. Not unlike how positive is inherently opposite of negative and you can assign physical meaning to each polarity however you like (i.e. we screwed up with the negative charge of electrons but the math doesn't care or how you can orient the positive and negative directions when placing a Cartesian plane for your mechanics problem however you want).

Technically, it's a kind of model. It's just that math can be very abstract and we humans don't have much intuition for it so we don't take things for granted and end up noticing peculiarities like this. But this exists in all models. The only difference is that the more intuition and experience we have with something, the more we take it for granted and the less we notice peculiarities in the model. A bit like how we tend not to think the same thing about the Pythagoras Thereom because can just pull out a tape measure and measure the sides of something. If measurement tools that were like a big rod on a rotary encoder existed, which were used by pointing it to align it with the axis of rotation to measure rotation around that axis were more commonplace, it wouldn't feel so strange to us.

I note you say: "I have read a bit about this and am still wondering why we actually care about the direction of angular momentum, because that the vector representing angular momentum is perpendicular to the momentum vector and the position vector doesn't really have any deeper meaning."

The point is that for central forces and for isolated systems, angular momentum is conserved - not just the magnitude, but also the direction. The position and momentum can change over time, but both magnitude and direction of angular momentum stay the same. It's this property that makes it interesting and useful, and we pay attention to the direction precisely because it being a constant helps us figure out the motion. It doesn't matter what forces individual parts of an isolated system exert on one another, the total magnitude and direction remains the same. We are thus able to simplify the properties of a system containing billions of individual particles, each with their own position and momentum, and represent it all as a body with a particular momentum and angular momentum, and compute its effect on other bodies. 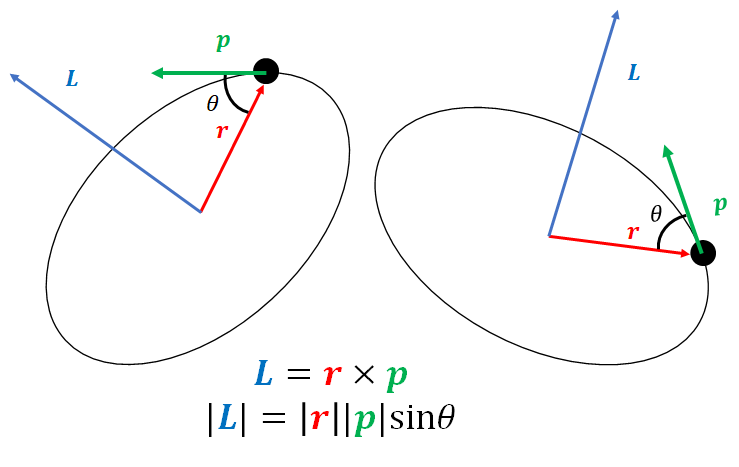 In fact the vector nature of these quantities is very important in determining how they add. Just like how you add velocities or momenta as vectors, angular momenta can be added vectorially too. Phenomena like precession occur precisely because angular momentum is a vector - it has an associated direction and they have to be added up using the rules of vector addition.

One more point: when you have radial forces in pairs between three or more bodies, individual angular momenta aren't conserved because angular momentum can transfer between bodies, but there is an overall conserved angular momentum. (Laplace showed this explains why planets orbit in roughly the same plane.) Obviously, we can't ignore the fact we're dealing with vectors when adding them up to get something conserved.

Here's a late answer that you may need to file under lies to children but I used to tutor this concept and developed an explanation that helped students who were struggling with the switch from 2D angular momentum (and torque) to 3D. I know this isn't an educators site but please bare with me as I walk you through a thought experiment.

I started with what some found to be a shocking claim: In 3 dimensions there is no such thing as clockwise, without an observer.

To back up this claim I asked them to imagine I had two clocks standing upright on the desk between us. They have moving hands but no numbers. And you can see right through them. All you can really see are the hands. I rotated my fingers simulating the hands of the clocks and asked, "Which is rotating clockwise?".

Almost everyone pointed at the one that, to me, was rotating counter clockwise. I would then ask them to step over to my side of the desk and I'd make exactly the same motions.

"The truth is, they're both rotating clockwise, and counter clockwise, at the same time. Just depends on where you stand when you look at them".

"Now our task is to deal with that when we come up with a way to model this rotation." Then I'd show them something like this: 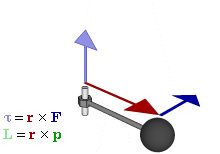 And I'd say, "This purple arrow here, the one that looks like it's pointing up, is telling you two things: How much torque and what direction to look at this thing from so it will seem to rotate clockwise. The observer here would by lying underneath and looking "up".

Now sure, we can go on about how that "up" isn't really "up" because this isn't really a spatial dimension, (for the magnitude at least). Or how this is a bivector like when you calculate area. But when students are at this level I simply say, "The magnitude here certainly isn't about anything physically being this distance away. It just looks like that because we decided to use this unused dimension for something else. In this case, torque."

Which was my sneaky way of letting them know everything they learned in 2D still works here in 3D. Once you're standing in the right place to look at it.

This is a (multi)-linear algebra perspective as to why encoding angular velocities by vectors and cross-products is natural and not just some ad hoc, arbitrary convention.

There's more to this story. The identification of a bivector with $A$ with a vector $\hat{a}$ goes through matrices and thus appear do depend on the choice of the orthogonal basis. But in fact, it only depends on the orientation of the basis, and can be defined without using coordinates at all. What's more, if $A,B$ are two bivectors, also $[A,B]=AB-BA$ is a bivector, and it so happens that the corresponding vector is given by $\hat{a}\times \hat{b}$. So, two different natural operations (one taking two bivectors and producing a bivector, and another taking a bivector and a vector and producing a vector) give rise to the cross product. This discussion becomes techincal, and I refer to this answer.

Not the answer you're looking for? Browse other questions tagged angular-momentum rotational-dynamics vectors or ask your own question.

34
How to define orbital angular momentum in other than three dimensions?
22
Elementary argument for conservation laws from symmetries *without* using the Lagrangian formalism
19
Direction of angular velocity
1
Do angular equivalents of linear equations in physics reveal extra information?
0
Resisting Precession of a Gyroscope