Where is Lorentz contraction centered on?

I am not a physicist, and I have a hard time getting an intuitive idea of the Lorentz contraction.

Supposing a train gets accelerated from rest to close to the speed a light, its length will be contracted by a certain factor. As observed from an observer in the initial rest frame, will the contraction bring both sides of the train closer to the center (looking like the rear is moving a bit faster, and the front a bit slower)?

What about two trains, one just in front of the other, both accelerated with the same acceleration, starting at the same time. Will the observer at rest observe a gap growing between them as they gain speed? Or will they just both shrink as a single object?

Supposing a train gets accelerated

Whenever attempting to solve problems in Special Relativity, always use the full Lorentz transformation to find out what the space and time coordinates are for each event in each coordinate system that is of interest.

As observed from an observer in the initial rest frame, will the contraction bring both sides of the train closer to the center (looking like the rear is moving a bit faster, and the front a bit slower)?

Another possibility is that the two ends accelerate "simultaneously" according the the initial rest frame. While this has an appeal to the naive understanding, this means that the two ends will always have the same distance in the rest frame. That means that the train will get stretched in its own frames. Also from its own frames (while moving), the front began accelerating first. (This second possibility is probably not what you mean when you describe a train as accelerating.)

What about two trains, one just in front of the other, both accelerated with the same acceleration, starting at the same time.

We must ask "both accelerated with the same acceleration" and "starting at the same time" in what inertial frames?

Will the observer at rest observe a gap growing between them as they gain speed?

As before the answer depends upon what you mean by "starting at the same time", and "with the same acceleration".

There is a simple intuitive picture for Lorentz length contraction and time dilation that can be understood by anyone familiar with ordinary geometry. It's not perfectly accurate, because spacetime is geometrically different from Euclidean space, but it's easiest to start with the Euclidean picture of what is going on, and then introduce the differences that result from the different geometry.

Take two people out into a field and ask them to start walking at the same speed across the field, but in slightly different directions. For each walker, 'time' is the forward direction, the direction they are walking in, and 'space' is the sideways direction, perpendicular to their path. Each walker sees the other walker slowly drift sideways relative to themselves - they are moving through space - and drifting backwards behind them - they are progressing through time more slowly. Each can see the other walker's clock run slow because each is using a different definition of 'time', a different direction. (Actually, in a Euclidean spacetime moving clocks run fast. This is the difference between Euclidean and Minkowski geometry. I'm glossing over stuff here.) 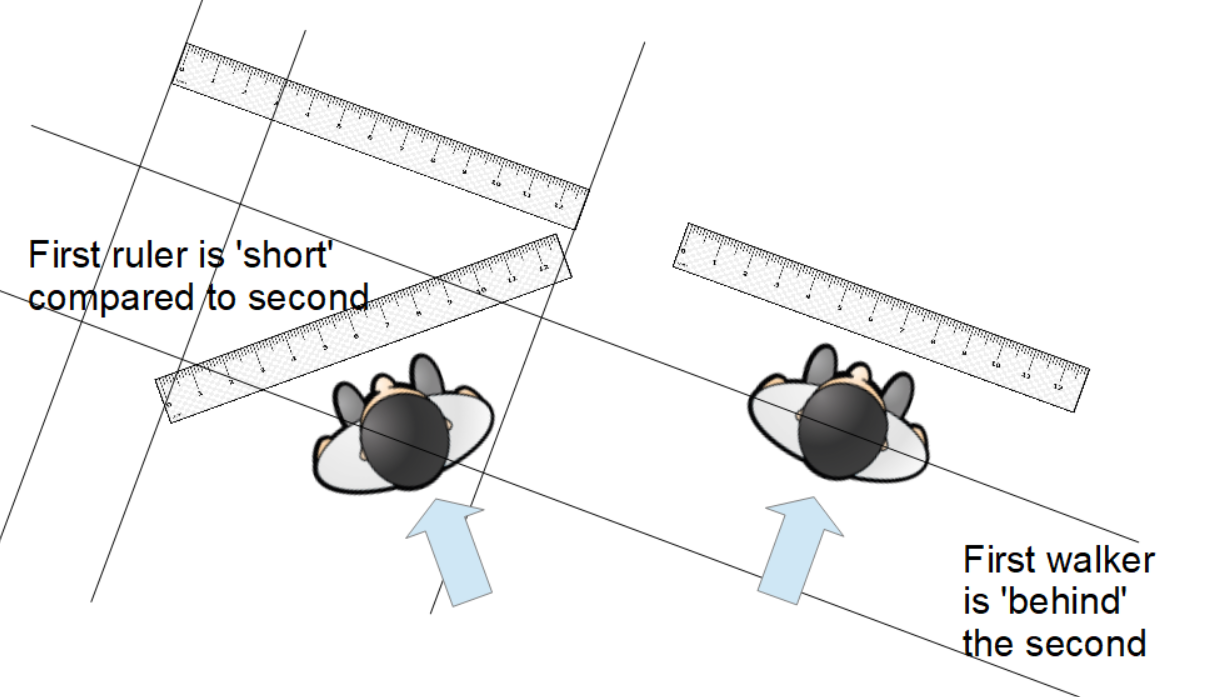 The difference between Euclidean space and the geometry of spacetime is based on tweaking Pythagoras' Theorem, so that instead of the square on the hypotenuse being the sum of the squares in the time and space directions, it's equal to the difference between the squares. This has some pretty fundamental and unintuitive consequences. However, the length contraction and time dilation really are just the result of rotating the time and space axes in spacetime, so that lengths look shorter when measured by a ruler when it is tilted at an angle.

Information can travel at most with the speed of light. So if you apply force on the back of the train, the front will not know it should also accelerate until later. This means, the train would shrink in its own frame (i.e. really, physically shrink). This is different effect than Lorentz contraction though, since Lorentz contraction is not physical contraction.

Lorentz contraction has nothing to do with accelerations, forces or their locations. Its simply a way to compare measurement between two different inertial reference frames.

And it doesn't matter where the engine is located.

From the point of view of a person standing in the station, your question is: Does the front of the train move before the back, or the back before the front, or both at the same time, or something else? And the answer is: Anything at all, depending on what forces you apply to the train.

Once the train has expanded or contracted, internal forces might or might not cause it to revert to something closer to its original length (and/or to break apart) but this would depend very much on the details of how the train is constructed and I think it is appropriate to ignore it for a question at this level.

Notice that you don't really need relativity to attack this question. Tell me how the front of the train and the back of the train move in the station frame, and I will tell you what the contraction (or non-contraction, or expansion) looks like in the station frame. Relativity is about comparing what happens in two different frames, but you are asking about how things look in one particular frame, so you don't need relativity.

The analysis below assumes the trains are perfectly rigid objects, and do not compress or stretch in a mechanical sense. That is, we ignore the physical stresses that the trains undergo, and ignore the time it takes for those stresses to propagate through the train.

As observed from an observer in the initial rest frame, will the contraction bring both sides of the train closer to the center

That depends on what you as an observer consider "the centre". When a stationary train would shrink you can speak about which way and how much the front and back of the train move. But how do you determine that for a moving, accelerating train? It suffices to say that the back of the train is accelerating slightly more than the front of the train, causing it to shrink with higher speeds.

What about two trains, one just in front of the other, both accelerated with the same acceleration, starting at the same time. Will the observer at rest observe a gap growing between them as they gain speed?

Or will they just both shrink as a single object?

They won't shrink as a single object (reducing the gap), unless they are a single physical object, that is they are connected with some physical, rigid structure. But in that case it is not physically possible to apply the same acceleration to both of them. You need to apply more acceleration to the trailing train than to the leading train, otherwise the physical connection between them will break.

As stated above, it does not make much sense to talk about the contraction centre. Note also, the if the engine is on the train, and applies a constant force to the train in that trains reference frame, then the acceleration according to the outside observer is not constant over time.