Do black holes attract more in GR than Newtonian gravity beyond their event horizon? [duplicate]

Ask Question
Asked 7 months ago
Active 7 months ago
Viewed 744 times
3
$\begingroup$
This question already has answers here:
What is the weight equation through general relativity? (2 answers)
Closed 7 months ago.

I was once shown that if a black hole with the mass of our Sun replaced our Sun in the solar system (I believe it was in a simulation program), the attraction it has on the planets will be the same because the distance between the planets and centre of mass is the same, regardless of the density. How well does this hold up to more accurate mathematics of physics such as GR, because I was shown this in the context of Newtonian Mechanics?

Black holes attract slightly more than Newtonian point particles within a distance within a Schwarzschild radius of their event horizon. The reason is that the spacetime curvature makes freely falling particles behave as if there was an extra $-1/r^3$ potential in addition to the normal gravitational and centrifugal potential terms. This means that there is an innermost stable circular orbit, while in Newtonian mechanics one can just orbit arbitrarily close to the central mass. Particles falling close to the black hole can plunge in in a way that is different from the hyperbolic swing-bys you get with Newtonian trajectories.

In practice this effect is negligible a few radii away, so planets orbiting a star (distances hundreds of millions of km away) do not feel any noticeable effect since a stellar mass black hole has a radius on the order of a kilometre.

The metric outside a spherical body of matter is the same regardless if it is a fluid kept up by hydrostatic pressure or a black hole. The key difference is that material bodies typically have far greater radius than the Schwarzschild radius, so the above details do not come into play. Even for a neutron star the effects are small.

This claim is equally valid in Newtonian gravity, where it's called the shell theorem, and in General Relativity, where it's called Birkhoff's theorem. It's not actually precisely true in either theory, because (1) the sun is not precisely spherically symmetric, (2) the complete system is not static (because the planets are orbiting), and (3) there is matter involved.

My guess is that that third point would have the largest effect (though still a very small effect on anything like a human timescale). The planets actually raise tides on the sun, which transfers energy between those tides and the planets' orbital motion. The efficiency of this transfer depends on details about the sun's structure (usually expressed in terms of Love numbers) — which would change significantly if the sun was replaced by a black hole. This effect is actually a topic of active investigation for gravitational-wave detectors, as astronomers hope to be able to measure properties of neutron stars orbiting black holes by detecting this transfer. See here for a popular account of some of this research.

It's hard to make a precise comparison, because there is no single way to relate the radial distance $R$ in the Newtonian calculation to the parameter $r$ in the G.R. calculation.

A useful thing to note is the relationship between the angular frequency $\omega$ of a circular orbit and the distance from the central star. The period of the orbit is $T = 2\pi/\omega$. In the Newtonian calculation the relation is given by Kepler's third law: $$ R^3 \omega^2 = G M $$ where $M$ is the mass of the central body. In the General Relativity calculation one gets a very similar result: $$ r^3 \left( \frac{d\phi}{dt} \right)^2 = GM $$ I say "very similar" not "exactly the same" because the time parameter $t$ here is not quite the same as the Newtonian time, owing to time dilation, and the radial coordinate $r$ is not quite the same as the Newtonian $R$, but they become equal in the limit $r \rightarrow \infty$, in relative terms (i.e. $(r/R) \rightarrow 1$).

Another interesting result is for a particle falling in the radial direction. In the G.R. calculation one finds $$ \frac{d^2 r}{d \tau^2} = - \frac{GM}{r^2} . $$ Again it looks a lot like the Newtonian result, but it is not quite the same because $\tau$ in this equation is proper time along the worldline.

So you see there is no single way to compare the Newtonian case with the G.R. case if you are looking for precision. You can't even assume that the Newtonian orbit of radius $R$ is necessarily comparable to the G.R. orbit at radial parameter $r$, because the distance between two points on a radial line is not equal to the difference between the two $r$ values.

This is no longer true when talking about masses that are not black holes. The potential then depends on exactly how the mass is distributed. I doubt this would produce observable effects at the distance of planets orbiting the Sun, but closer to any potential black hole there would certainly be a difference. For example there are a number of papers outlining the differences in the inner most stable circular orbit for spinning neutron stars vs black holes for example (Pappas & Apostolatos 2013.

The effective potential of a (non-spinning or spinning) black hole is however different in General Relativity (GR) and Newtonian physics. These differences become apparent for radial coordinates that are becoming comparable (but still greater) than the Schwarzschild radius.

The plot below shows the effective potential for a falling body (around a non-spinning black hole) with different amounts of specific angular momentum, $L/m$. In general, all orbiting/falling objects will have some angular momentum with respect to the black hole centre unless they are falling exactly radially.

The solid lines show the GR versions, whereas the Newtonian curves (for the same $L/m$) are the dashed lines of similar colour. 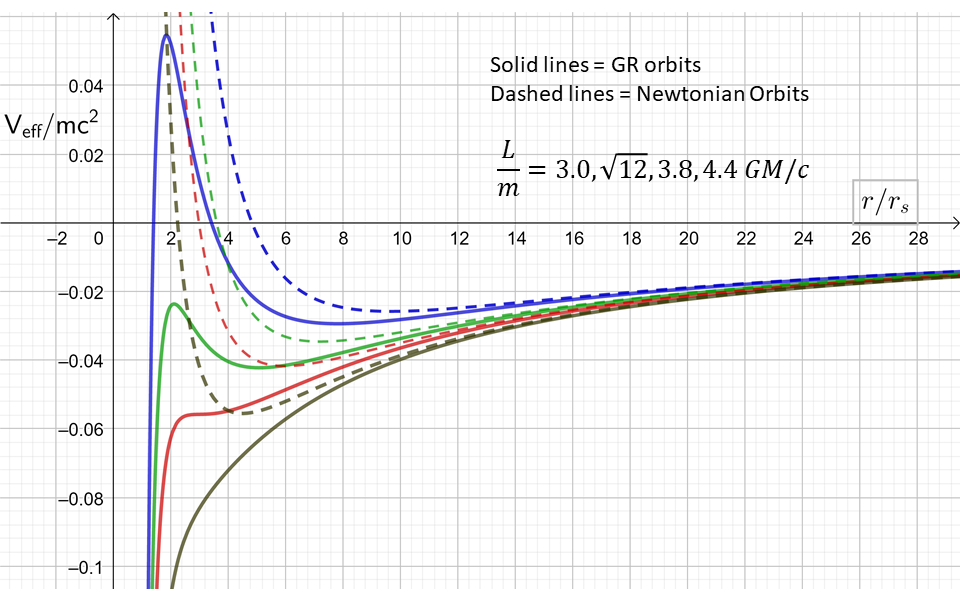 Now imagine some object approaching the black hole with a (kinetic) energy that places it above zero on the y-axis. For the Newtonian curves, the trajectory will always encounter the dashed line at some finite radius, with a larger radius for a larger value of $L/m$. The falling body will then veer away from the black hole on a hyperbolic trajectory.

However, a different fate could await the falling body in GR. If $L/m < 4GM/c$ then there is no potential barrier preventing the object falling straight (well, it would be a spiral actually) into the black hole. For larger values of $L/m$ then it is possible for a barrier to be encountered, somewhere between $1.5< r/r_s<3$ that will turn the falling body away, but there is always some value of (specific) kinetic energy that will allow this barrier to be overcome and allow the body to fall into the black hole.

So from that point of view it is somewhat easier, in the sense that there is a wider range of parameter space, for a falling body to enter the black hole. In fact, in Newtonian physics, unless the angular momentum is very small it is actually very hard to get the body to $r<r_s$ unless it has an enormous amount of (specific) kinetic energy for its specific angular momentum.

You can also see that beyond about $\sim 20r_s$ in this plot, the GR and Newtonian potential become very similar and converge. This means that behaviours of bodies on orbits or trajectories that are a long way from the event horizon are not grossly affected by GR - there are just perturbations, such as the precession of periapsis in GR (famously for the orbit of Mercury) that is absent from a Newtonian treatment. This happens because the period with which it takes a planet in an elliptical orbit to move from its perihelion to aphelion and back again is slightly different (in GR) from the time it takes to execute a full angular orbit.

In terms of the orbital period of a planet for a given $r$ (though note that $r$ has a slightly different meaning in Newtonian vs GR), a distant observer would say that there is no difference. The circular orbital speed would be $\sqrt{GM/r}$ in each case.

Not the answer you're looking for? Browse other questions tagged general-relativity gravity newtonian-gravity black-holes event-horizon or ask your own question.

44
What is the weight equation through general relativity?

0
Galaxy rotation equation problem
1
Would a black hole's rotational axis precess in orbit around the sun?
9
Is it possible the space-time manifold itself could stop at a black hole's event horizon?
3
Can a black hole event horizon form before the singularity for an outside observer?
0
Radial dependence of a spherical energy density, gravity, and black holes
0
Does Black Hole mass increase widen gravitational radius?
1
Why is an event horizon dependent on density?