Can laser light be described by individual photons?

If laser light is described by a coherent state, a macroscopic quantum state, to what extent does it make sense to speak of individual photons in laser light?

And if the laser is attenuated to be a single photon source, is it still valid to describe the laser light by a coherent state?

On the other hand, there are circumstances in which the photons in a laser should be treated as a collective entity. For example, a laser beam interacting with a two-level atom in the Jaynes-Cummings model has the dynamics split into subspaces that only couple neighbouring photon-number states $|n\rangle$ and $|n+1\rangle$, in which the probability of the atom being in the ground or excited state oscillates with a frequency that depends on $n$. These dynamics cannot be explained by considering lasers to simply be collections of individual photons.

Both a strong laser and an attenuated one can be described by a coherent state. For the attenuated laser an $|\alpha|\approx 1$ is used to describe it. As with any coherent state the distribution of photons is given by the Poisson distribution. Therefore, there is a randomness on the amount of photons arriving at the detector per unit time as shown: 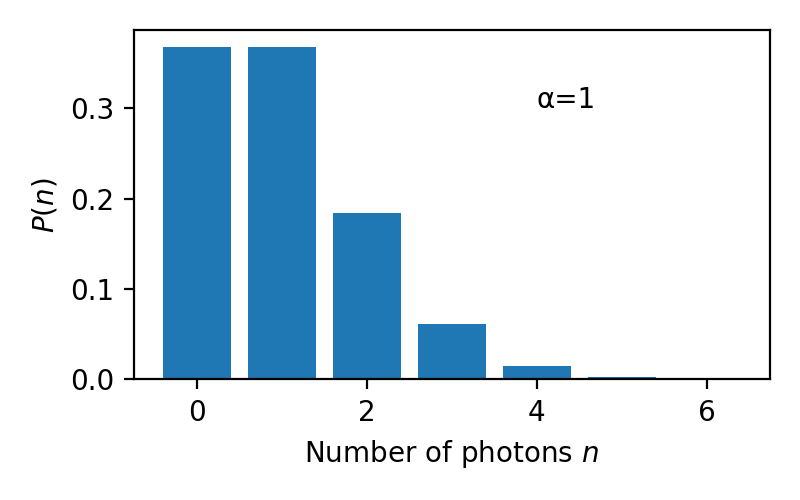 Sometimes 1 photon, sometimes 0 photons, fewer times 2 and so on.

This is different from a "single photon source" which is a quantum state of light such as a Fock state $\left|n\right\rangle$ for which always $n$ photons arrive per per unit time.

For both the strong and weak laser the photon description makes sense, as in it gives the right answer. However, in most cases with strong lasers, the complication of the quantum description is not worth it for the increase in precision gained.

Not the answer you're looking for? Browse other questions tagged quantum-mechanics photons laser quantum-optics coherent-states or ask your own question.

4
photon wave function, double slit, single photon source
2
Do photons emitted from a LED show bunching?
5
Understanding the behavior of light/photons inside a Laser
1
What is the electric field due to a coherent radiation? Is it polarized?
17
Relation between radio waves and photons generated by a classical current
1
Does semiconductor laser need stimulating photon to produce coherent light?
1
Two-photon interference inside Mach-Zehnder interferometer
10
Why is laser light described by a coherent state?