How to understand the concept of work using the following example:

When this particle is released at P1, then the electric force acting upon it (to the right) will cause it to accelerate to the right. Therefore its kinetic energy will increase. This tells me that the charge had a greater Potential Energy at the start (P1). 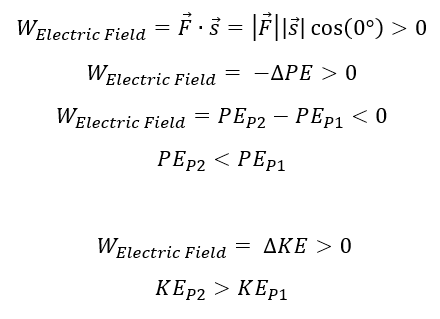 However I am confronted with the idea that the system as a whole has done negative work, because we did not do anything (no exterior influences/forces) in order to move the particle. Could someone explain to me why this is the case?

It is not unlike dropping a mass in a constant gravity field.

The force applied is constant (ideally) and the work is $F.dx$ in module (in the electrical example as well as in the gravitational example).

In both cases, the object has lost potenttial energy and gained kinetic energy and the overall balance remains $0$.

Not the answer you're looking for? Browse other questions tagged electrostatics electric-fields work capacitance or ask your own question.