What did I just photograph? (rainbow way out of place)

I just captured the following two pictures. Straight above me, almost directly above, was a rainbow, about 120 degrees of it were visible.

The thing is, the sun was completely out, low on the horizon and not centred. What explains this? My understanding was that the refraction at specific angles was what made the colour separate in a specific pattern. The angles didn't match, here. 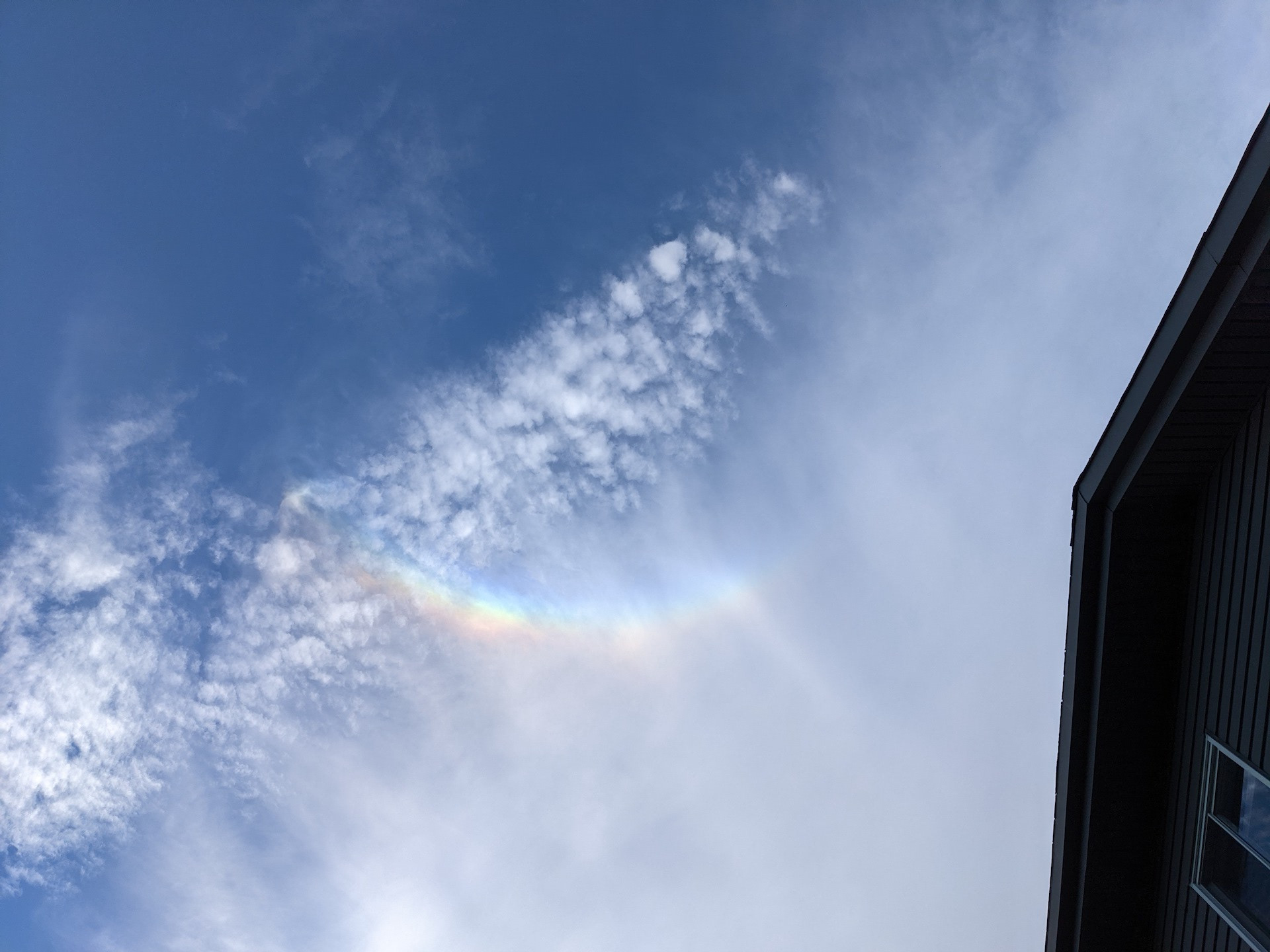 In the portrait picture, the sun is in the very bottom, on the left side: 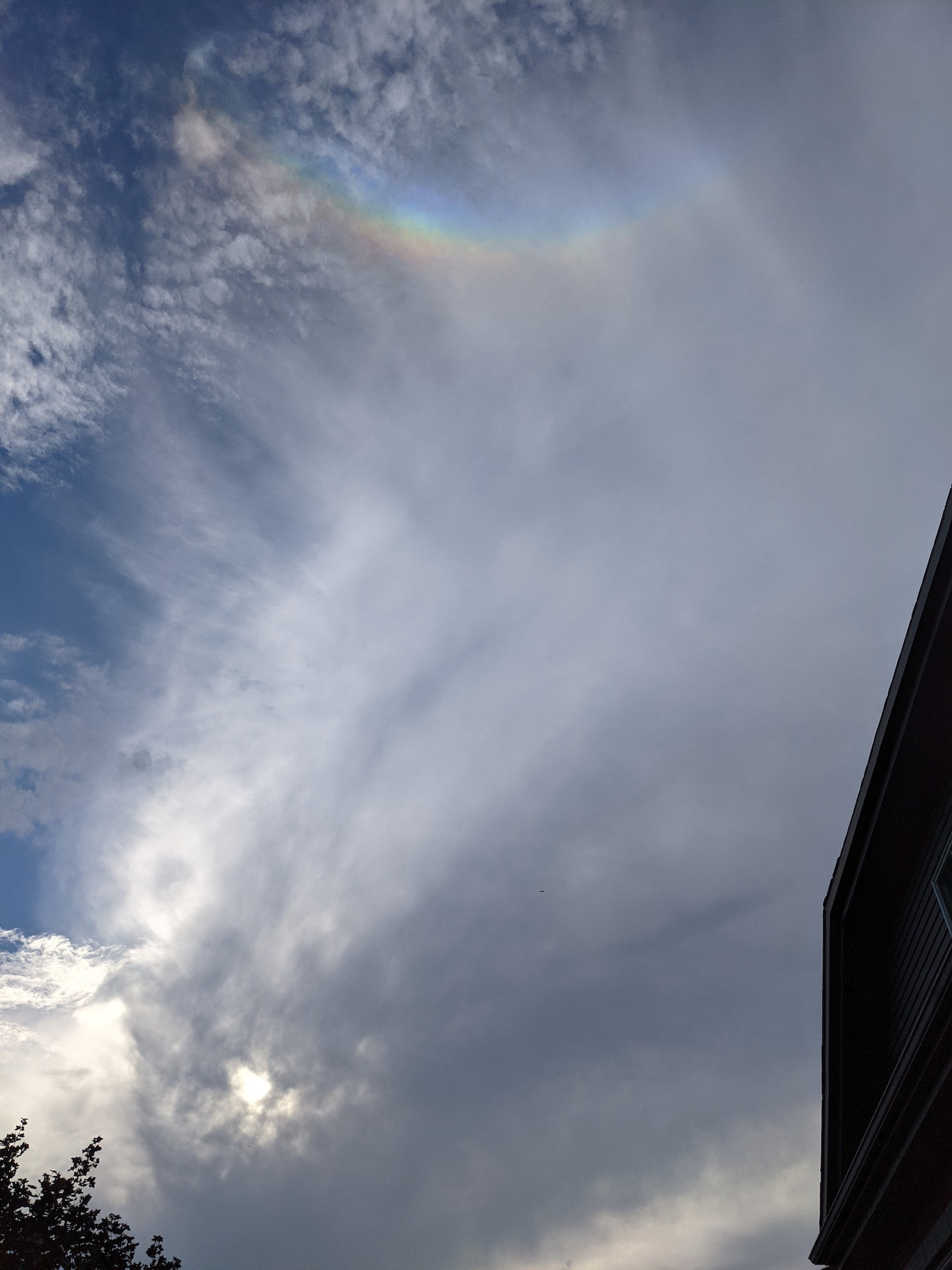 As pointed out in the comment by @Rob, this is called a Circumzenithal Arc or colloquially, an "upside-down rainbow". Different to usual rainbows (which appear on the opposite side of the sky from the sun), a circumzenithal arc is centered around the zenith of the sky (directly above), and can only appear if the sun's angle is less than $\approx 30Â°$ to the horizontal.

In order for a circumzenithal arc to form, small ice crystals need to be positioned high in the sky in order to create a field of tiny prisms. Then the sun's rays will enter these ice crystals and refract through them therefore projecting an arc in the sky. If this projection was complete (a full $360Â°$), it would completely encircle the sky's zenith - hence the term circumzenithal.

Completely circular circumzenithal arcs do occur but are very rare, and so most of them only take up a section of the sky. The circumzenithal arc remains until the sun's angle exceeds $\approx 30Â°$ to the horizontal.

In most cases, a circumzenithal arc will last about 30 minutes to an hour (sometimes more). They are most common in colder climates (I assume in Montreal - where you took these images - it is fairly cool), where ice crystals abundantly tend to collect in the sky (they can be sometimes be seen in mild temperature zones as well during winter, or periods of cooler weather).

The above link (which explains the phenomena in detail) has more technical details:

The circumzenithal arc, also called the circumzenith arc (CZA), upside-down rainbow, and the Bravais arc,is an optical phenomenon similar in appearance to a rainbow, but belonging to the family of halos arising from refraction of sunlight through ice crystals, generally in cirrus or cirrostratus clouds, rather than from raindrops. The arc is located at a considerable distance (approximately $46Â°$) above the observed Sun and at most forms a quarter of a circle centered on the zenith. It has been called 'a smile in the sky', its first impression being that of an upside-down rainbow. The CZA is one of the brightest and most colorful members of the halo family. Its colors, ranging from violet on top to red at the bottom, are purer than those of a rainbow because there is much less overlap in their formation.

The intensity distribution along the circumzenithal arc requires consideration of several effects: Fresnel's reflection and transmission amplitudes, atmospheric attenuation, chromatic dispersion (i.e. the width of the arc), azimuthal angular dispersion (ray bundling), and geometrical constraints. In effect, the CZA is brightest when the Sun is observed at about $20Â°$.

Not the answer you're looking for? Browse other questions tagged visible-light diffraction weather or ask your own question.

8
What determines the apparent radius of the rainbow?
20
What are these rays that appear in photograph of sun?
14
What's the origin of the flattened X that appears when of a small (but powerfull enough) light is reflected in our non-powered TV screen?
41
Why do small patches of snow remain on the ground many days or weeks after all the other snow has melted?
0
Rainbow colors along horizon
3
Falcon 9 exhaust color