Is the concept of voltage poorly explained or is it just me?

Ok my cognitive barrier is this: All the videos I watched about "what is voltage" explains it pretty much this way: 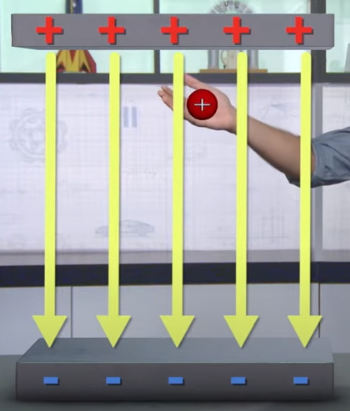 Up to this point - all great. But now they jump to explain that "A battery of - for example, 9V - means that the difference in electric potential between its two terminals is 9 Joules per Coulomb.

I don't quite get how this scenario of 2 charged plates creating a field applies to a battery:

I think that basically what I don't understand is how this explanation of voltage with the context of 2 points in a field having a potential difference between them apply to electrical current.

Batteries create a potential difference through chemical reactions inside the battery.

Many chemical compounds are made up of ions, which are groups of atoms which have exchanged some electrons with other groups of atoms. For example in sodium chloride (the "salt" you use in cooking) each sodium atom loses one electron, and each chlorine atom gains one electron. The "salt" made up of sodium and chlorine ions is completely different from a mixture of sodium (which is a soft yellow metal) and chlorine (which is a gas).

The "trick" in constructing a battery is to use chemicals which "want" to react together by exchanging electrons in this way, but to stop them from doing so because of how the battery is physically constructed.

When you connect an electrical circuit to the battery terminals, the chemical reaction can take place, because some electrons are "pushed out" from one terminal of the battery into circuit, and other electrons are "sucked in" from the circuit into the other terminal.

This explains why the battery voltage stays (approximately) constant until all the reacting chemicals inside are "used up" and the reaction stops.

In a rechargeable battery, forcing a current to flow the opposite way reverses the chemical reactions until the battery is "fully charged."

Note, an oversimplified (and wrong) way to think of this is to imagine that individual electrons travel (fast) from one battery terminal all the way round the circuit and into the other terminal. The actual speed of each electron is very slow (only a fraction of a millimeter per second). Think of the external circuit as more like a pipe filled with water. If you "push" a drop of water into one end of the pipe, a drop of water comes out of the other end, but it is not the same drop of water that you pushed in.

With the battery - you need a conducting material.

For a charged particle to feel a force? Nope, you dont. There's still an E field inside the battery just like in your picture above when there's no conducting material attached.

When you attach a conducting material though, charges will get pushed through it. Those charges obviously have their own E fields, and that's what creates the E field inside the wire - the battery itself isn't sending electric field through the wire.

Alephzero explained the battery quite well, so I will try to add to this answer by connecting the idea of your two charged plates to the idea of a battery.

Notice that the definition of voltage does not depend on the distance between the plates. The definition of voltage says that if a specific charge travels from one plate to the other, then it will have gained or lost a certain amount of energy (the direction in which it gains/loses energy depending on the sign of the charge). This is independent of how it got there, although it may lose some of it on its way depending on how it gets from one plate to the other. All of this is because the two plates have different electric potential, and this difference defines voltage.

Now consider bringing the two charged plates very close to each other, but in a way that they cannot exchange any charges. (You can for example imagine that both plates are only separated by a very small isolator.) The voltage between the plates will be the same, but there is no space left where you could 'put' a charge so, due to the potential difference, it freely travels through air from one plate to the other. If you now connect the two plates via a conducting wire, charges will immediately travel through the wire and the voltage/potential difference will vanish. This is what happens for example if you touch a radiator after accidentally charging yourself on a carpet. What a battery can do, and what makes electric current possible, is that a battery can maintain the potential difference/voltage even when charges travel through the conducting wire for a significant amount of time.

Imagine a point charge Q. It exerts a force F on the other charged particles. If you want to bring a charge q from a long distance (infinity) to a certain point in space, you need to do a finite work to overcome the force created by the charge Q. This work is called the electric potential energy of Q and q. It is proportional to the charge q that you’re moving, so the greater q, the more work you have to do, because then it is repelled or attracted stronger to the Q. And the work that you have to do to bring a charge to a certain point per that charge q is called potential at that point, so it is only dependent of Q, not q. Voltage is simply the potential difference between to points, or, in other words, the work per charge that you have to do to bring a charge from one terminal to the other. If you’re dealing with a charged object, then the potential at a certain point in space is the sum of the potentials that exist due to the force exerted by each small charge in that object. In the batteries there are indeed plates. And each of them is charged (+ and -). In the case of two parallel plates, the force exerted on charges between them appears to be constant through that region. So what does 9V battery stand for? Well, as F=const, we simply have V=Fd/q, where d is the distance between the plates. So 9V means that if there’s say 1mm between the plates, the ratio F/q (it’s electric field E actually) is 90000N/C or 90000V/m. (sorry for mistakes in my writing, I’m sure there’re plenty).

Not the answer you're looking for? Browse other questions tagged electrostatics electricity electric-fields voltage definition or ask your own question.

0
Charging a capacitor
2
Why is work done against the electric field to move charges to charge a capacitor?
0
Confusion with electric field in a capacitor circuit
1
Electricity basics
0
What is the connection between electric field and a battery?
0
Can a balloon and wool be seen as two terminals of a battery?
1
Is this a correct way to think about 2 batteries connected in series?
0
Is voltage a difference between two charged objects or two positions in a field?