I posted this question because I have a problem in grasping the connection between force on a charge and voltage potential equilibrium. So the problem is the following: we have a charged capacitor disconnected from the battery. If a negative capacitor plate is divided into two pieces but still connected to each other with a wire and we do the same to the positive plate, the charge should be equally distributed. Now, if we decide to bring one half of the negative plate closer to the half part of the positive plate we changed potential but as far as the charge on the plate isn't moving the far negative plate-half and the closer negative plate-half should equally act on the positive pieces as the electric field is uniform and not dependent on distance between plates. There shouldn't be any difference in attraction between all plates. Now, a current should flow through the wire when one part of the capacitor is brought closer as the voltage is different but on the other hand it shouldn't if we take that the electric field on the charge between plates doesn't change with distance (in an ideal case)? 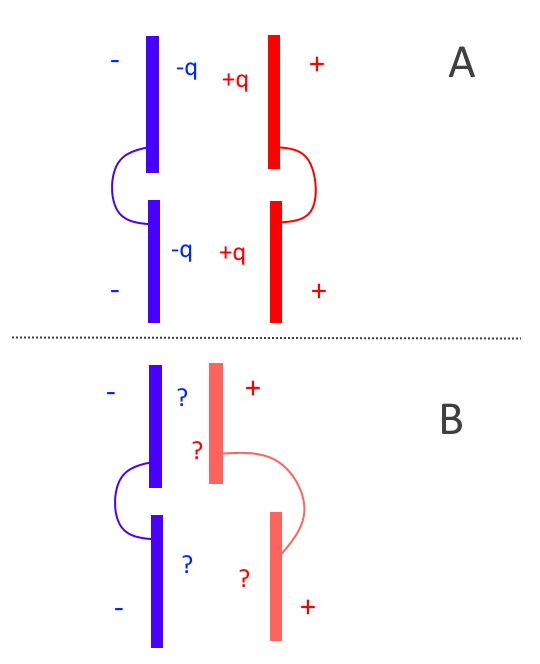 Because the plates are connected by wires, they remain an equipotential surface. We can therefore safely assign both left plates (-) with $V=0$ and both right plates (+) with $V=V_0$. This MUST be true in both pictures A and B.

Since the areas of each plate is identical,

As a guide to dealing with this, use the following:

where d is the distance between the plates and A is area.

Also the electric field between the plates does depend on distance, $E=\frac{V}{d}$

The voltage will be the same for both halves if the system is connected to a battery, e.g with a wire going from the middle of blue wire to the middle of the red wire via a battery or power supply of a certain voltage.

Distribution of potential, electric field and electric charge on the divided capacitor

Distribution of potential, electric field and electric charge on the divided capacitor with moved part

Figure 3 shows that due to the broken symmetry there are asymmetric distribution of charge on the capacitor parts. Now we can come back to the initial problem with fixed electric charge. It is clear that there is electric current through the wire in that time when part move to support electric charge distribution as shown in Figure 3.

Now, if we decide to bring one half of the negative plate closer to the half part of the positive plate we changed potential

The potential does not change, because by connecting the plates with a wire (of theoretically zero resistance) the voltage remains the same. Both FIG A and B are capacitors in parallel.

There shouldn't be any difference in attraction between all plates.

Now, a current should flow through the wire when one part of the capacitor is brought closer as the voltage is different but on the other hand it shouldn't if we take that the electric field on the charge between plates doesn't change with distance (in an ideal case)?

As already pointed out, the voltage between the upper and lower plates is the same. But since

The capacitance of the upper plates is now greater than the lower plates. Then, from

Is the force inequilibrium that is the cause of charge displacement?How does this force show up if the field lines of a plate capacitor are paralel implying the attractive force on electrons does not change changing the distance....there should be a force causing the electrons to start accumulating when the plate comes closer...or > not?

The strength of the electric field, $E$, is greater for the upper capacitor in FIG B for the reason explained, and that results in the charge redistribution. But you are misunderstanding what the "field lines" in the capacitor mean.

If I understand correctly, the argument you're making is this. You know that in situations A and B, the fields between the top and bottom capacitors aren't going to be the same: that's what is meant by "current must flow". The charges will redistribute, because you know what the steady state in situation A is, and you know what the steady state in situation B is, and so you know that there must be some kind of redistribution. This is what quantumwave's answer is saying.

I can think of three possible arguments to explain what's happening here.

I would like to be give more details, by explaining exactly how the wires modify the electric field, but it's probably going to be quite complicated. I thought it might be interesting to study a toy model, where the plates are all parallel: you put down a capacitor at $z = 0$, then another at $z = z_0$, connect the plates by a vertical wire at $x = y = 0$, and then to connect the topmost plate to the bottommost plate, you make the whole of space loop along the $z$ axis, either by repeating the pattern, or by modifying the topology of the space. Unfortunately I don't have time to work through it, but if somebody else would like to give it some thought, that would be great.

Not the answer you're looking for? Browse other questions tagged forces electric-fields charge potential capacitance or ask your own question.

0
Voltage and parallel-plate capacitors
21
Why does the voltage increase when capacitor plates are separated?
0
Capacitors and external electric fields
1
How does distance effect the flow of charges between a capacitor's plate and battery
0
Potential outside of a capacitor
2
The electric field between two plates of a capacitor
0
Can one capacitor charge another connected by a single lead only?
2
Why does a floating capacitor act differently than a grounded capacitor?