If different light frequencies travel at different speeds in air, why doesn't the sun have a rainbow halo?

I've been watching the MIT 8.03 "Waves and Vibrations" course videos. In the lecture on AM waves, Professor Lee mentioned that the reason we need AM for radio is that air is a dispersive medium (ie. different frequencies travel at different speeds).

This was surprising to me. I know about dispersion in water/glass, which cause rainbows, the prism effect, and chromatic aberration... 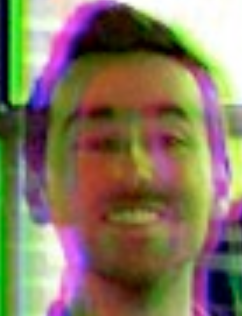 ..but if dispersion also happens in air, shouldn't there be a similar effect? Shouldn't the dispersion cause, for example, a rainbow-halo around the sun? 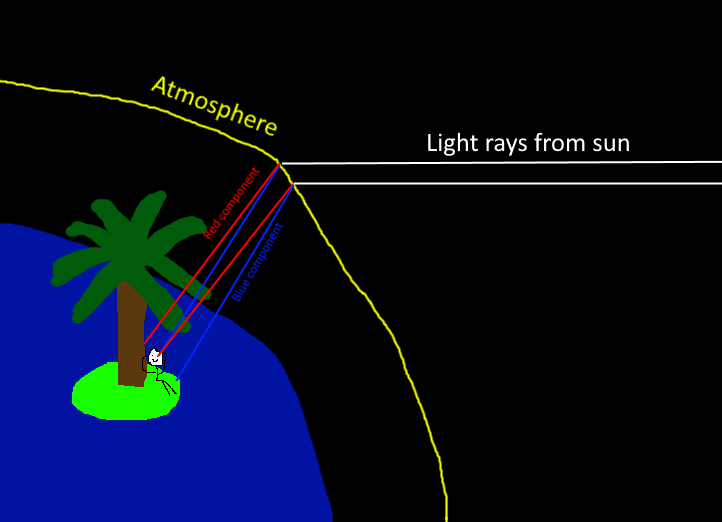 In the above diagram, dispersion of sun rays should cause different beams to appear different colors, causing a rainbow effect. What's wrong with this diagram (aside from the exaggerated angles)?

What's wrong with this diagram (aside from the exaggerated angles)?

Answer: Nothing, aside from the exaggerated angles.

Let's try estimating the magnitude of the effect for dry air, which seems to be the focus of the question. According to ref 1, a good semi-empirical model for the index of refraction of dry air is $$ n = 1 + 10^{-6}\times\left(776.2+4.36\times 10^{-8} \times \left(\frac{1\mathrm{\ cm}}{\lambda}\right)^2\right) \times \frac{P}{1\mathrm{\ kPa}} \times \frac{1\mathrm{\ K}}{T} \tag{1} $$ where $\lambda$ is wavelength, $P$ is pressure, and $T$ is temperature. The paper says this is a good model for altitudes $< 100$ km and for wavelengths from $0.2$ to $2000$ $\mu$m. This includes the visible spectrum, which is roughly from $0.4$ to $0.7$ $\mu$m. The pressure and temperature of the atmosphere vary, but for the sake of estimation I'll treat the atmosphere as a uniform slab with a pressure of $P=100$ kPa (https://en.wikipedia.org/wiki/Atmospheric_pressure) and a temperature of $T=250$ K (https://en.wikipedia.org/wiki/Atmospheric_temperature). Using these numbers, the range of $n$ over the visible spectrum is $$ 1.000314\lesssim n \lesssim 1.000322. \tag{2} $$ If we pretend for simplicity that the interface between this slab-atmosphere and the vacuum is abrupt, then the angle of refraction $\theta_r$ is related to the angle of incidence $\theta_i$ by (https://en.wikipedia.org/wiki/Snell%27s_law) $$ \sin\theta_r = \frac{\sin\theta_i}{n} \tag{3} $$ where $\theta=0$ means perpendicular to the interface. Equations (2) and (3) say that $\sin\theta_r$ varies by no more than $0.00001$ over the visible range of wavelengths. When the angle of incidence is $45^\circ$ (as a typical value), this means that the angle of refraction varies by only $$ \Delta\theta_r\lesssim 0.0006^\circ \tag{4} $$ over the visible range, and it's even smaller when the angle of incidence is less then $45^\circ$. Because $n$ is so close to $1$, light from the sun won't reach you as a result of pure refraction unless you're looking directly at the sun, and then you won't be able to discern a variation as tiny as (4). When looking away from the sun, you see only light that is scattered in addition to being refracted, and since scattering smears the angle of incidence over all directions, the tiny variation (4) is completely washed out.

That's why the sun doesn't normally have a noticeable rainbow halo in dry air. Caveats:

It does. It's called the Green Flash. There is also a much rarer alpine Blue Flash because blue light can survive at altitude: 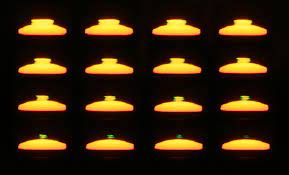 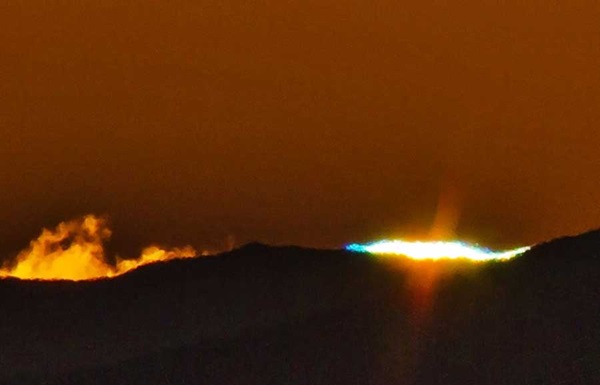 The red and green (and even blue) rims of the solar disk do exist and can be observed. Ref. 1 shows some simulation results that let one see how the rims would be seen in an extremely clear atmosphere. Due to wavelength-dependent extinction, the green rim (that's at the top of the solar disk) is much less visible when the solar disk is at the horizon. But there are reports of blue and green edge disappearing last over the mountains—at elevations where optical depth difference is not as large as near true horizon.

Below is a result of a simulation of the solar disk at 2° over the horizon, through the US Standard Atmosphere, with aerosol optical depth unrealistically small to make the rims easily visible (image source: ref. 1). 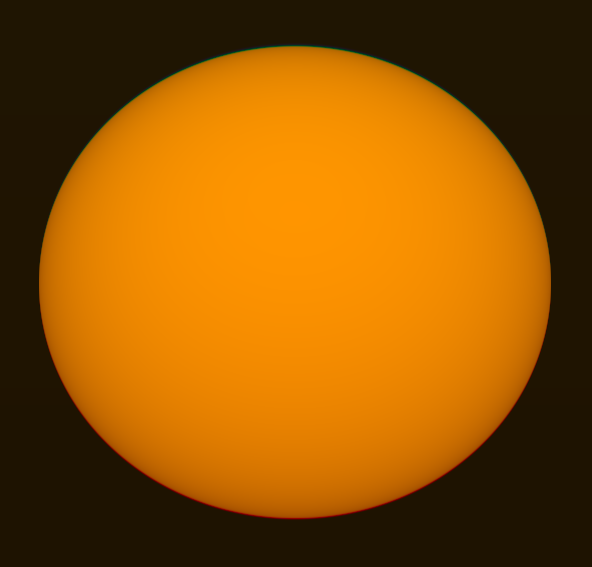 Of course, real atmosphere has more aerosols, and refractive index varies over the solar disk (so that even without mirages it appears "wavy"). These factors make such fine details hard to observe looking at the whole disk directly. And don't forget that, if you're looking at the solar disk without enlargement (just a solar filter), your eyes' resolution won't be large enough to notice the rims around the whole disk. Only by obscuring the disk with terrain will you be able to notice them.

In fact, I've found a great video (ref. 2) that shows a very magnified view of the Moon, where the blue rim is easily visible. It's definitely not chromatic aberration of the telephoto lens, because the mountain doesn't have a colored rim, while the faraway Moon does — and this still looks the same even when the lunar disk touches the mountain. Here's a screenshot from the video: 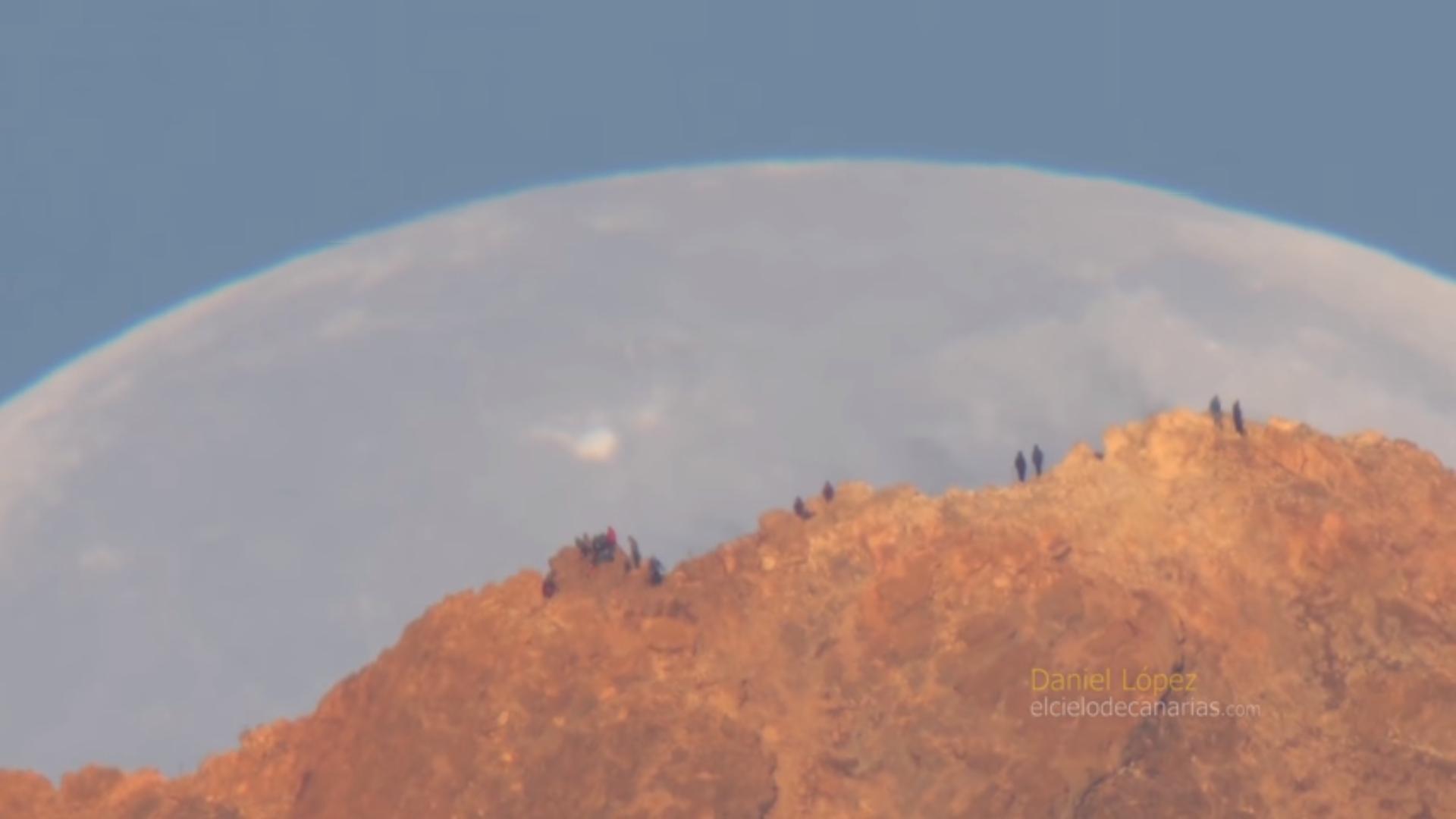 But it does, when there is enough humidity so the air is dense enough. 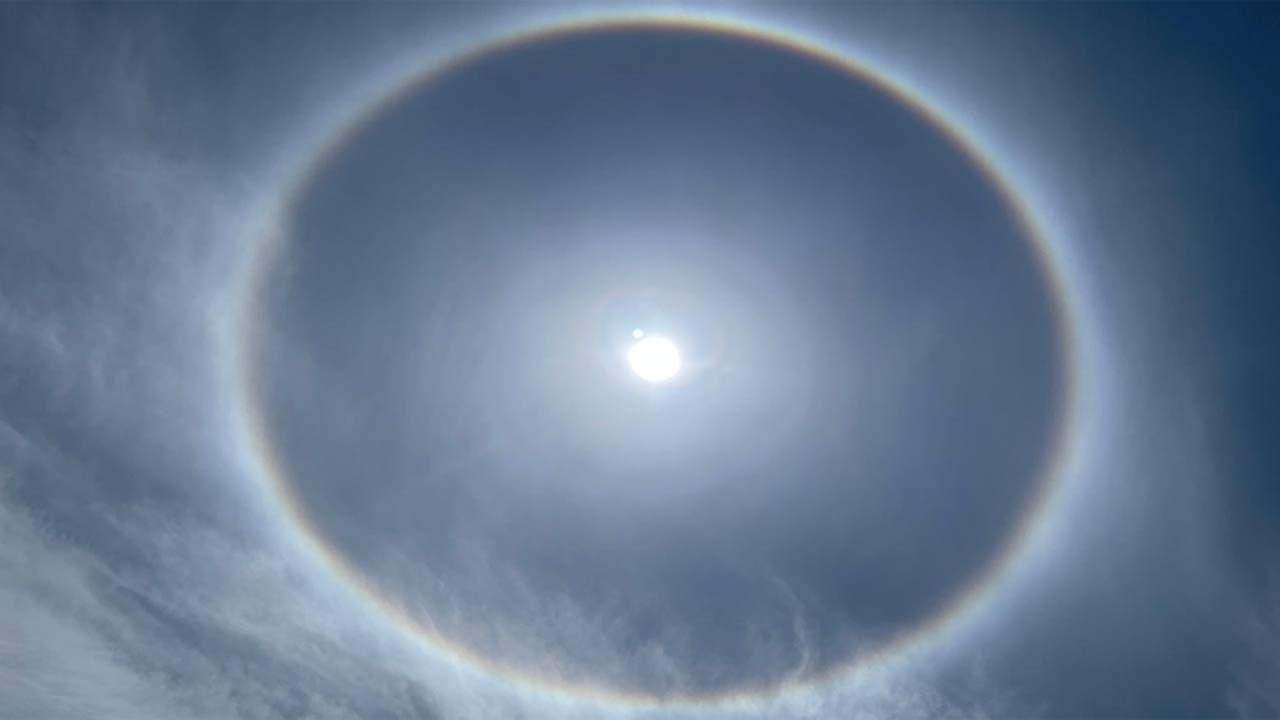 The difference with radio waves is in the range of frequency , visible light has orders of magnitude larger frequency than radio waves.

Not the answer you're looking for? Browse other questions tagged electromagnetic-radiation visible-light dispersion or ask your own question.

1
Why we don't see a spectrum of colours above water?

92
Why does my wooden door disperse light into a rainbow color spectrum?
23
What is the explanation of the glory (optical phenomenon)?
1
Different wavelengths of light in vacuum need to travel at different rates?
5
Do gravitational waves disperse/refract (like EM waves in a prism)?
1
Why does this freshly machined shiny steel surface act like a prism?
3
Why does a prism spread its "output" out over space, not time?
4
If all raindrops were small transparent ice cubes how would the rainbow look like?
13
Why does light have multiple frequencies?
1
Why we don't see a spectrum of colours above water?