I've seen this video explaining Electrical Potential, and there's something I don't quite get.

The guy in the video is giving an example of two plates - one negatively charged and one positively charged. He then simulates a positive charge placed in between and explains that when the charge is closer to the positive plate, the potential energy is bigger, and as it gets further, it decreases. 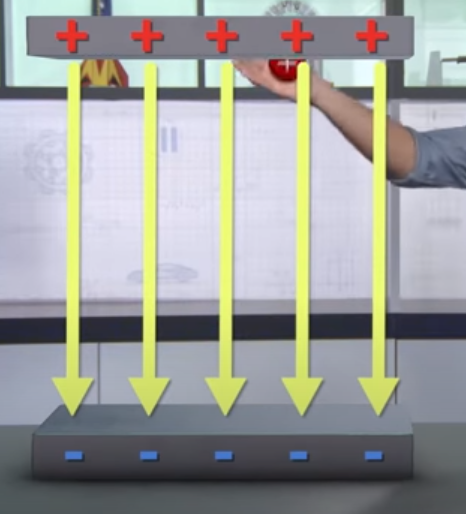 The negatively charged plate is not necessary. What it does is make the field between the plates uniform, which makes it convenient for treating the problem mathematically.

As for your other question, yes! The electric potential is a field. That means it has a value at every point in space, be it inside a wire, the air around you, or in your body. The very pumping of your heart is due to a timed difference in potential across its muscles!

I'll do my best to walk us through this doubt.

In a really show explanation, in order to have an electric potential, you don't need two plates, actually, every thing you need is one single charged particle that will generate an electric potential around it(and you can measure it by using a proof charge... Which as amazing as it sound it doesn't have any charge).

Although it doesn't mean that every single point in space has some electric potential associated to it, some points in space have null potential, and this is due to the way that we calculate potential, as the summation of every potential that affect our particle.

It is possible to notice that you body will have some electric potential, in some cases, especially when you rub in something and your arm might get a little goose bumps, that is Electrostatic Energy.

There's another thing that is important to notice, there are other ways to have a null potential, which is a phenomenon called electrostatic shielding(put a conductor body around what will have null potential). And that's how electric devices as your phone don't get damaged when passed through a field.

Finally, there's another strong association between electrostatics and gravitational energy, both are fields, and both are calculated in the same way, just with some changes of variables. So you might say that, being in a electric potential field, and don't have charge is analogue to be on a gravitational field and don't have mass! Therefore you'll not be affected by it.

Thank you for the opportunity, if there's any misunderstanding please let me know in the comments. Have a great apprenticeship.

The very first thing to understand is that what phisically matters is not potential itself, but potential differences. Indeed, even if there are no charges in a region of space you may have non-zero potential (you may set it to be any value you want); but then every point of that region would have the same potential.

Or do you must have 2 oppositely charged objects in order to have an electric potential?

Electric potential is a property which is associated to every point of space, no matter the presence of charges.

Referring to the figure, only 1 plate would be enough: what is shown there is a capacitor and (in the simplest circuits) one of the two plates is usually grounded and its potential is conventionally $0$ (remember that what matters is difference in potential).

1
Basics of Current Electricity
5
Why does the potential difference between two charged plates increase as they move further apart?
1
Movement of charges in presence of electric potential difference
2
Why is work done against the electric field to move charges to charge a capacitor?
0
Is the electric field between two oppositely charged parallel plates negative?And what about two electric lines with infinite length?
0
Problem with the formula for electric intensity due to a charged sheet
0
Is the concept of voltage poorly explained or is it just me?
0
Do neutral conductors be attracted to a Van de Graff generator?