Ask Question
Asked 1 month ago
Active 1 month ago
Viewed 26 times
1
$\begingroup$
Homework-like questions and check-my-work questions are considered off-topic here, particularly when asking about specific computations instead of underlying physics concepts. Homework questions can be on-topic when they are useful to a broader audience. Note that answers to homework questions with complete solutions may be deleted!

This is related to Problem 1 in Chapter 2 of "Rocket Propulsion Elements, 9th Edition":

(a) If there is 50 kg of fluid flowing per minute at an absolute velocity of 200 m/sec, what will be the force on the plate?

(b) What will this force be when the plate moves in the direction of flow at u = 50 km/h? Explain the methodology. 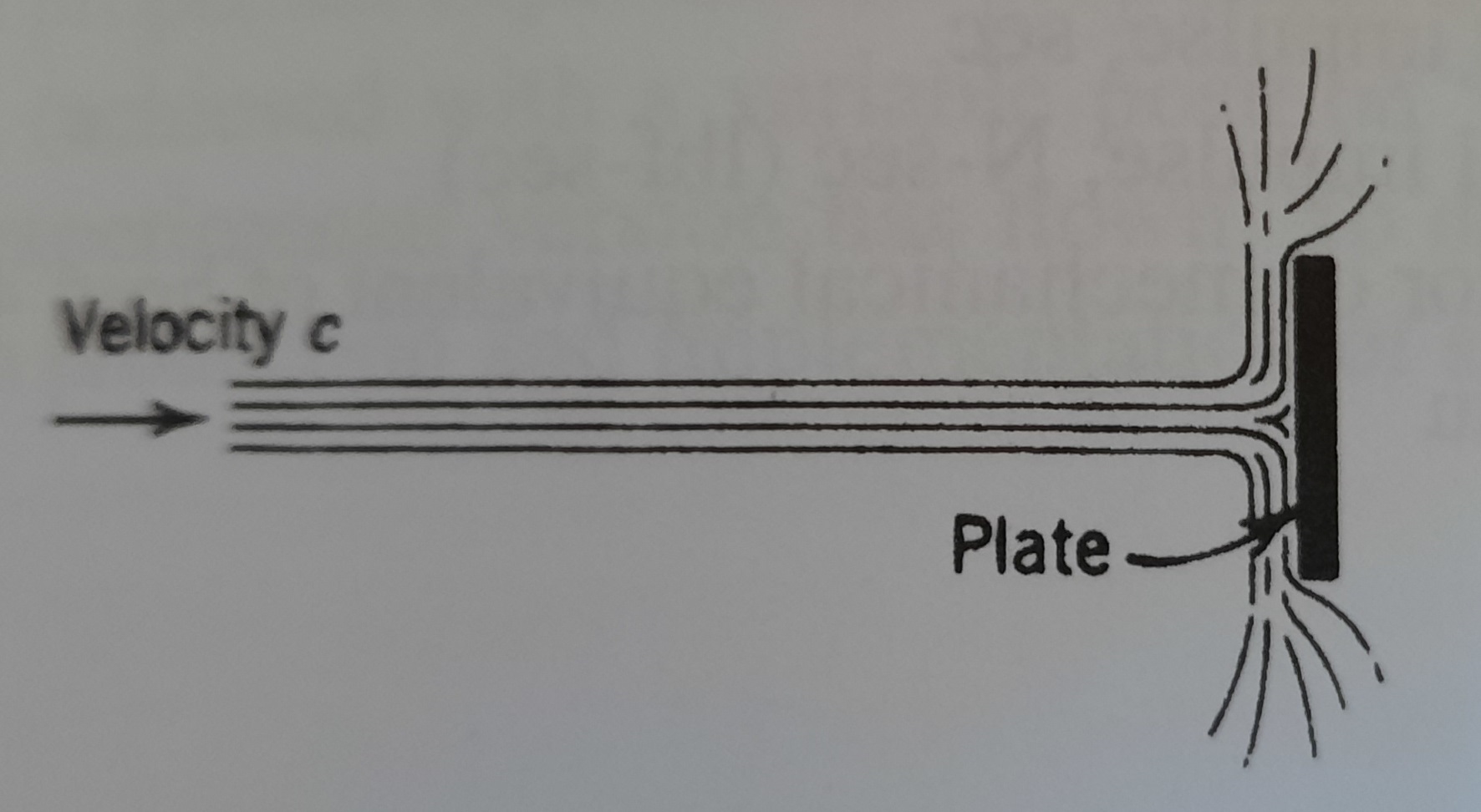 I see this as a stream of water coming from a point infinitely far away, hitting a plate that is infinitely large. We ignore all matter interactions so I see it as the water simply stacking up on the plate, transfering its kinetic energy into thermal energy upon hitting the plate, and then staying on it. In (b), the water retains some momentum, given that its speed doesn't go to 0.

The co-author of this book, however, doesn't think this way: 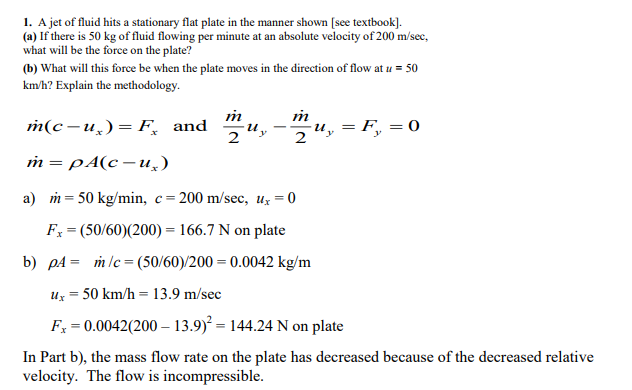 I don't understand how stating that the flow is incompressible makes his calculation correct. It seems, to me, that he places himself both on the plate referential, moving at $14\,\mathrm{m}.\mathrm{s}^{-1}$, and on the absolute referential used in (a).

My assumption is that his reasoning would hold true only if the fluid jet is channeled through a fixed-section pipe in (a), and the same pipe in (b). This, with the incompressible flow assumption, would decrease the mass flow rate.

Can someone clarify this for me please?

EDIT because the question is now closed : I now feel stupid for not seeing this earlier. The mass flow rate of the fluid has not changed. However, as stated in the solution, the mass flow rate on the plate has changed. So for every time $\mathrm dt$, there is a unit of mass $\mathrm dm$ leaving the "source" of the fluid, and a mass $$\mathrm dm'= \frac{\mathrm dm \cdot (c-u)}{c}$$ going on the plate. There is an ever growing mass of fluid staying in suspension between the source of the fluid and the plate.

12
Compressibility and the form of Newton's second law in fluid mechanics
0
Difference in mass shown on balance and real mass
4
Fluid flow: Force acting on the fluid and the Navier-Stokes equation
4
How fast does liquid rise in a capillary tube?
1
Why is the continuity equation hardly used in solid mechanics when it is essential in fluid mechanics?
0
Comparing the Lagrangian form of Newton's law & the Reynolds transport theorem