Why won't a tight cable ever be fully straight? [duplicate]

I posted this picture of someone on a zipline on Facebook. 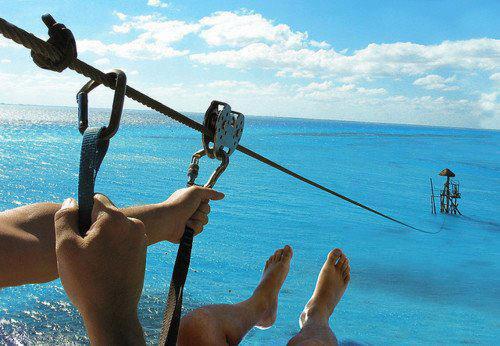 One of my friends saw it and asked this question, so he could try to calculate the speed at which someone on the zipline would be going when they hit the water.

The only answer, which was accepted, includes the disclaimer, "Assuming the pulley being used to slide to be friction less.Though not possible.Also the rope is assumed to be in-extensible and straight."

I used to have a zipline of about the same length in my back yard as a kid and even when I was young, I noticed that we could never straighten the line completely, even when it was slack, we could not make it completely straight. And, naturally, once weight was added, there was a curve where the weight pulled the line down.

One of the comments from the member providing the answer is "Well i can show you why the string cannot be ever straight." I know that from experience. We could never make it completely straight with no sagging. I asked the reason for this and was directed to a book on Amazon. Having just spend $50 on a number of books for summer reading, my book budget is gone for a while.

So can someone answer that? Why will the line never be straight when it's set up (and when there is no load on it)?

This is a statics problem.

Assume the cable is static, perfectly straight and horizontal.

Pick any point on the cable and the sum of the forces on that point must equal zero.

There is a force, due to gravity, "downward".

So, there must be an equal, opposing force "upward". This upward force must come from the tension in the cable.

But, if the cable is straight and horizontal, there is no "upward" component to the tension, only "sideways" components. So there is a net downward force on this point.

But that's a contradiction! Thus, the cable, if it is static, cannot be straight.

Imagine a heavy chord raised off the ground between two blocks. Rather than consider all of the mass pieces of the rope, and the forces on them, we can simplify the problem a little bit by considering a slightly different one.

The chord can be represented by a heavy ball (in the middle of the chord) connected by two massless strings to the blocks. From experience, we know that this mass/string combination forms a triangle with two sides that are the same length and one other side. Each of the slanted sides forms some angle with respect to the ground.

When you pull tighter on the strings (in the picture of the tightrope walker below, for example) the ball (or tightrope walker) goes up a little. The angle between the angled sides and the ground gets smaller. But the tighter you make the strings, and the higher the ball goes, the more the tension in the string (which always points along a string) is going into pulling the ball sideways.

So consider this. If the ball were hanging at its highest point, that is, with the strings forming a straight line instead of a triangle, then the tension force of the rope would be pulling totally horizontally on the ball. But this doesn't cancel the force of gravity, which pulls the ball downward -- regardless of the tension in the rope. So the ball will sink a little.

Therefore there can never be a configuration where a ball hangs on a straight rope. The rope must have a kink in it. This is the same reason why if you have a "straight" rope and a tightrope walker walks on it, the rope must sag a little. See the diagram below. In a static problem, all of the components of the arrows (left-right, up-down) have to add up to zero. Notice how the tension arrows point a tiny bit upward. 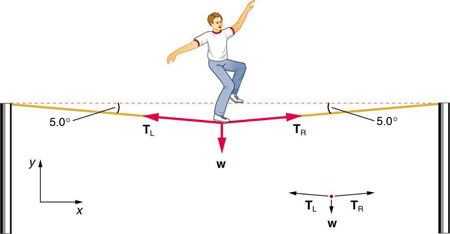 For a heavy rope (a rope with mass but without a ball) the hanging doesn't form a kink, but a slightly slopey curve. The principle is the same.

It's pretty simple: the forces at the anchor points would be infinite because of the 90° angle ;-)

Imagine two pillars with the same height. If you attach a rope on both of them and try to tighten it, you will slowly increase the pulling force at the top of the pillars while increasing the angle between rope and pillar.

To fully straighten the rope, you need to achieve the 90°, which is not possible, since the force should be infinite (tan(90°)) due to gravity. In fact, either the pillars or the rope will break…

Now imagine, that a rope is made of tiny particles (which actually is quite true ;-) and append the same logic on these subsystems of the rope.

In the case of the guy on the zip line, there is seemingly no near 90° angle, but in fact every piece of tiny "rope/pillar"-systems is suffering under this tension problematic. Without gravity, there is no problem to straighten such a rope…

I hope I could describe it clearly, maybe a picture would help!

A cable will never be straight because it stretches due to the weight (its own or of the passenger).

So in short, the reason is its elastic properties.

If this doesn't convince you, think of a heavy rod. It's straight, or as straight as we want it. Why is that? But of course it's because it's much stiffer and less elastic. If your zip line was very stiff, like a cylindrical rod, the curvature would be basically absent in comparison to a chain or a rope. 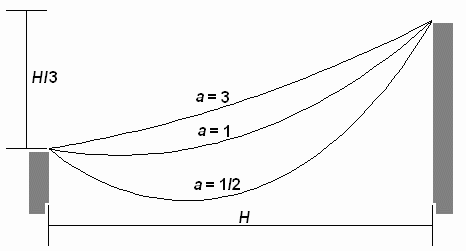 More in depth, a zip line's shape is going to be approximated by a catenary with the following formula:

which is governed by the tension $T_0$ which is in turn related to the elastic properties of the material (and how much you pull the line, of course).

The neatest way to do this is to consider the part of the cable bounded at its lowest point on one side and a general point on the other with the $x$ axis in the plane of the curve and pointing horizontal: 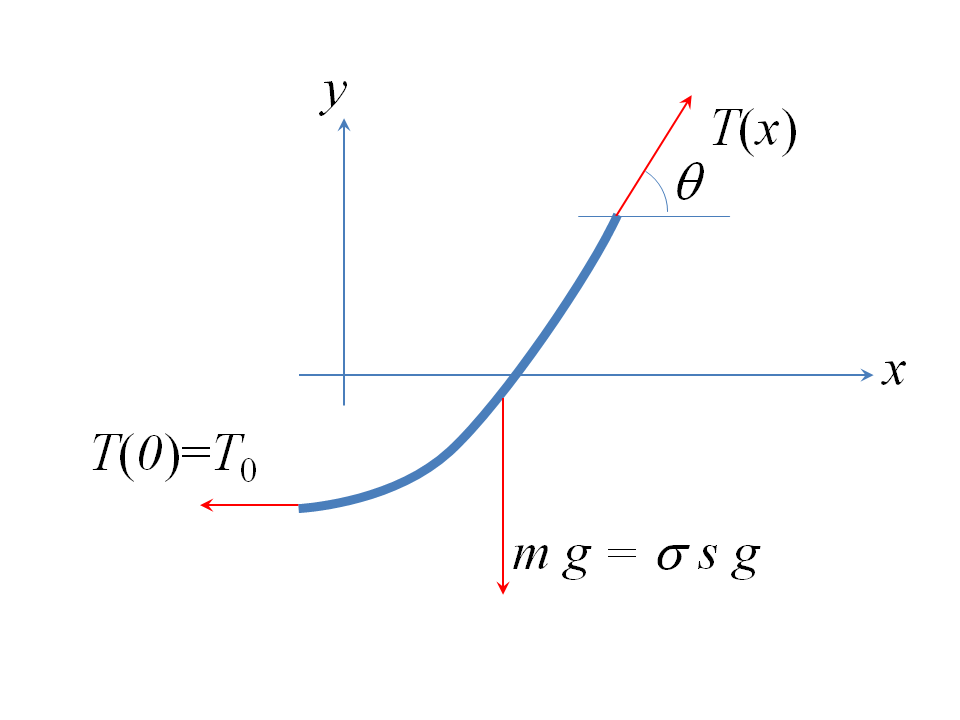 The crucial assumption here, expressed in various ways in the other answers, is that the rope is wholly flexible, i.e. it cannot support shear, i.e. the tension force must be tangent to the rope at all points. We take as a constant of the curve the tension at the lowest point: sure we don't know it yet, but it's still a system constant.

If the curve's equation $y = y(x)$ defines it height at horizontal position $s$ then the curve's equilibrium is defined by (here $\sigma$ is its linear density and $s(x)$ the arclength of the curve as a function of $x$):

by way of the standard arclength element $\mathrm{d}_x\,s = \sqrt{1 + (\mathrm{d}_x\,y)^2}$. Solving this equation gives you Skliv's formula straight away, whence you can impart the boundary conditions and thus understand that for all finite $T(x)$ there is a sag in the rope.

Even if the rope were a rigid beam which can support a nonzero shear, we would reach the same conclusion. The two analytical theories (aside from full numerical finite element analysis) to use here are Euler-Bernoulli Beam Theory and, more accurately, Timoshenko Beam Theory.

For the top surface of an object to be flat and level, the object below the surface must be under compression. It would be possible to have a walker's tightrope that was almost perfectly flat and level on the top if there two additional ropes rope below and to either side of the first one, and the lower ropes were separated from the first one by spacers, and connected to each other by tension members (in theory one could get by with only one additional rope, but only if it stayed precisely under the first one; if the second rope shifted at all to the side, the spacers would create lateral forces pushing it even further to the side; unless the distance between the ropes was long relative to their length, it would be impractical to prevent the structure from buckling).

Most cables and ropes have very little compressive strength except when they're coiled up in a pile. Consequently, unless one adds compression members which are made of some other material, they will not be able to support a flat upper surface. It is, however, possible for arrangements of cables and ropes to support a flat lower surface--a fact which underlies the design of many suspension bridges. The same principle may be observed on a smaller scale in the design of the overhead power lines for electric railways. Such a design would probably not work well for a zip line, however, as any kind of support would get in the way of the pulley.

So can someone answer that? Why will the line never be straight when it's set up (and when there is no load on it)?

If the string was weightless, it would be perfectly straight. Here on earth however, you'll never be able to have a rope or wire with "no load," because the line itself has a weight.

12
Why can't a rope be pulled completely straight?
18
What holds up the lowest point of a rope following a catenary curve?
6
What is the shape of a rope hanging from two ends?
5
Shape of a string/chain/cable/rope/wire?
2
What is the equation for the tension on the ends of a cable suspended at different heights?
0
Tension required for perfectly horizontal rope (having some mass per unit)
2
How to find speed when accelerating down a slanted wire
1
Transferring force through a string, including gravity

13
Suntan: UV absorption vs daytime
7
Did Newton conduct any experiments to find something called momentum, or was he such a great genius that he was able to spot it intuitively?
3
Why does a force divide equally on multiple supports/legs?
0
Out running a bear