Is the Higgs boson not responsible for most mass?

The video "Your Mass is NOT from Higgs Boson?" argues that almost all the mass that we are made of doesn't come interaction with the Higgs field, but rather that most of a nucleus's mass comes from the space between quarks (the quark-gluon plasma).

If the video is correct, then there really needs to be an easy-to-understand explanation for mass because science popularizers make us laypeople think that the Higgs mechanism is responsible for all the mass in the atoms and that would be of course very misleading.

Higgs mechanism is not the universal mass-responsible detail, but the ultimate. Other mechanisms could give you large quantities of mass - and in fact they do - but there is still some part which they are unable to explain. And that's why the Higgs mechanism is needed.

For the atom of hydrogen:
Total mass - about 1 GeV
Electromagnetic field - several eV (billionth parts)
Nuclear force field - none
Masses of electron and quarks - by Higgs mechanism - about 20 MeV
The rest is due to gluons (and virtual quarks) tension and motion.

1) Experimental physics has established with very many experiments that the underlying framework of nature is quantum mechanical, and this includes special relativity, when the energies are appropriate. It is dependent on a very small number of elementary particles out of which all matter that we have observed and experimented with in our laboratories is composed.

2) The definition of mass that you are worrying about is the everyday one described well by classical mechanics, as the resistance to a force applied.

In the regime of relativistic physics an elementary particle as seen in this table has a rest mass:
$\hspace{50px}$ 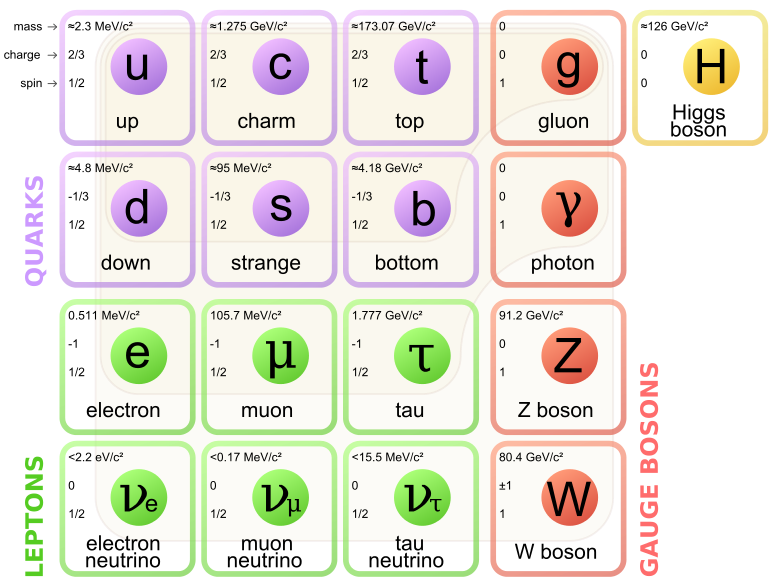 They have a mass given in the table, except for the two top ones in the column in red, which are massless particles. These particles in various bound states compose the protons (quarks and gluons) and neutrons, the protons and neutrons bound make the nuclei of the atoms and gather around them the electrons and the atoms make up the solids.

If you look at the masses they could never sum up to the mass of the proton $\left(1\frac{\mathrm{GeV}}{c^2}\right).$

What happens is that the addition is not of scalar masses, but of four vectors, the three dimensional momenta that we know plus the energy as the fourth component in the special metric of special relativity. The mass, in this framework is the corresponding "length" of three dimensions and is called the "invariant mass" : For the elementary particles this "length" is identical with the mass of the table . When two elementary particles form another particle, or come out of a particle , the mass of the composite particle is a function of the four dimensional vector addition of the individual elementary particles composing it .

For example there exists a particle called pion $\left(\pi^0\right)$, of mass $135 \frac{\mathrm{MeV}}{c^2}.$ It decays into two massless photons. The two photon system has the invariant mass of the ${\pi}^0$ even though each photon has mass zero.

A hierarchy is built up then, elementary particles, (quarks, gluons) combine to compose the protons and neutrons, protons and neutrons combine to compose nuclei, electrons plus nuclei compose atoms.The composite invariant mass at one level becomes the rest mass of the next level's basic particles. Each level has less kinetic energy in the combination than the previous level , so the masses start to resemble the classical mechanics masses. When we reach solids and liquids of dimensions larger than nanometers, the relativistic effects can be ignored .

Where does the Higgs field come in, in this saga? It only affects the invariant masses of the elementary particles in the table , their rest masses. The bulk of the masses we measure macroscopically are a build up, level by level, on these elementary particles and their binding energies. The high energies that bind the under lying layers become macroscopically the classical mechanics masses.

A good point is to think of the binding energy curve and nuclear reactions where we see the opposite process: classical mass turning into energy by destroying the level of compositeness.

A particle physicist told me that Higgs fields explains just a small part of the mass, while most of the mass is due to the energy binding de protons in the nucleus (which is described using QCD).

So I think that what the video says is right.

There is a clear mistake in what he says : the mass does not come from the interaction with the higgs particles in it self. In essence, for the mass due to the Higgs mechanism, the Lagrangian contains originally massless particles. This is due to the requirement of gauge symmetry. Mass terms are not gauge invariant.

The higgs mechanism is a dynamical mechanism in which originally massless fields acquire mass. The (scalar) field associated with the Higgs acquires a non zero vacuum value, as we say, by spontaneous symmetry breaking. The symmetry breaking part comes from the fact that if the vacuum state of the Higgs don't contain the same symmetry as the original, unbroken, Lagrangian then the gauge bosons will acquire a mass. The non-zero vacuum of the higgs will give the terms corresponding to a mass.

But the higgs particles, as we can produce them in the LHC, are small excitations of the higgs field. These small perturbations are done around the vacuum state of the field, and can also interact with the particles of the theory, but are not responsible for the mass.

Not the answer you're looking for? Browse other questions tagged mass standard-model higgs or ask your own question.

2
How does the gluon field and the Higgs field interact with one another?
1
Where does mass come from?
68
Why isn't Higgs coupling considered a fifth fundamental force?
25
How do we know that the nucleus isn't a quark-gluon plasma?
13
Quarks in a hadron: where does the mass come from?
11
Is everything made of massless particles?
4
Does decrease in temperature affect mass $E=mc^2$?
15
Is it only the Higgs field that stops me from getting to $c$?
10
The contribution to mass from the dynamical breaking of chiral symmetry
6
Is most mass from KE or PE?
See more linked questions