What does the Reynolds Number of a flow represent physically?

What does the Reynolds Number of a flow represent physically?

I am having trouble understanding the meaning and the utility of the Reynolds number for a certain flow, could someone please tell me how this type of dimensionless factor is significant and what it tells us about a problem?

From the Wikipedia article for Reynolds number:

In fluid mechanics, the Reynolds number (Re) is a dimensionless number that gives a measure of the ratio of inertial forces to viscous forces and consequently quantifies the relative importance of these two types of forces for given flow conditions.

In addition to measuring the ratio of inertial to viscous forces in a flow, the incompressible Navier-Stokes equations can be written in non-dimensional form such that the only parameter is the Reynolds number (ignoring body forces). This is very nice because it is the basis for the validity of wind tunnel testing.

Suppose we would like to measure the aerodynamics of the flow around a Boeing 747. Two (at least) options exist:

But how do we know that the flow we measure in the wind tunnel is what really happens in flight? We match the Reynolds numbers and the exact same equations model both situations--therefore the aerodynamics must be the same. (Ignoring compressibility effects.)

Now, why should we care? Why is Reynold's number important? Well, the first thing to realize is that the Reynolds number is a dimensionless number. This means that is has a certain power that dimensionful numbers don't. It is a pure number and doesn't depend on any way on your particular choice of units. This means it has some kind of intrinsic or universal meaning outside of any human constructs.

In particular, Reynold's number can be thought to measure relative velocity of the flow. We would expect that the physics of fluids should be different for slow and fast flows, but this question in and of itself is not well defined. Slow or fast compared to what? This is what Reynold's number tells us. It tells us whether flow is slow or fast by forming a natural nondimensional measure of flow speed. Since its a pure number, we expect qualitatively different behaviors if $\text{Re} \ll 1$ and $\text{Re} \gg 1$.

And this is precisely what we observe. The low Reynold's number limit corresponds to things like marbles falling in corn syrup, or cloud droplets in air, or bacteria in water. This is slow viscous flows where drag forces are proportional to velocity.

On the other hand, in the high flow limit, we have turbulent flow, where eddies are created behind our object or around edges in pipes, this is the general limit most things in air on human scales corresponds to, so you are familiar with turbulent flow intuitively. In this limit, drag is proportional to $v^2$. Large things like people will be in this turbulent regime in air even at speeds as small as 0.1 m/s or so. This is the limit in which viscosity becomes unimportant, and for the most part we can imagine flow in a fluid as corresponding to just sweeping up the fluid in front of our bodies of interest.

For instance, look at the drag force felt by a sphere as a function of Reynold's number (from wikipedia ) 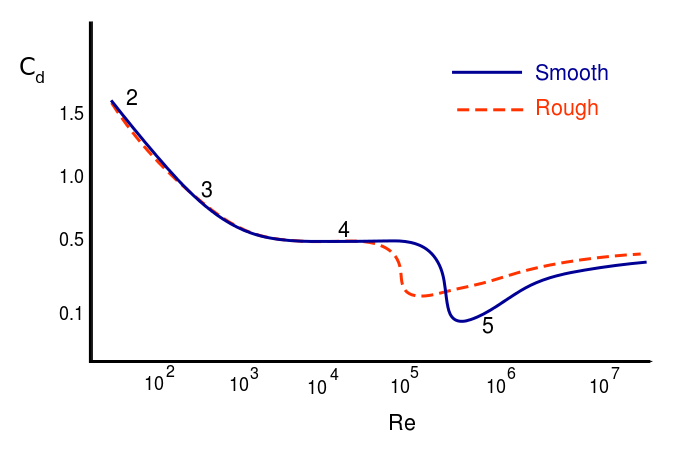 In the low reynold's number limit, drag coefficient scales as $\text{Re}^{-1}$ whereas in the high limit it is roughly constant.

Consider it another way. Kinematic viscosity is the diffusion constant for momentum in a fluid. It is how fast the momentum spreads out due to collisions between the different molecules in a fluid. Let's take a look at a couple relevant times for fluid flow.

But there is another characteristic time: $D/v$. This second time corresponds to the time it takes an object to move a distance equal to its size. $v$ is the velocity it is travelling (relative to the fluid) and $D$ is its size, so it will move a distance $D$ in time $D/v$.

Reynolds number is the ratio of these two times $$ \text{Re} = \frac{ D^2 / \nu}{ D/v} = \frac{ v D }{ \nu} $$ So it measures the ratio of the time it would take the fluid to flow around an object, over the time it takes the object to move a distance equal to its size. Clearly here if that ratio is large, we expect the fluid doesn't move out of the way at all and is just swept up, while if it is low, we expect appreciable flow around the material.

In fact, using this idea you can "derive" the normal air drag equation for force. We can just assume in the simplest case that a ball travelling through air just bumps into all of the air molecules in front of it. Each of these molecules impart a momentum change of $mv$ to the object (where $m$ is the mass of an air molecule). How many molecules do we hit? Well, if we move for a time $\Delta t$, if our object has a cross sectional area of $A$, it sweeps out a volume of $A v \Delta t$, so the mass of air in that volume is $\rho A v \Delta t$, and so the number of air molecules is $\rho A v \Delta t / m$. Do the total change in our momentum is $$ \Delta p = ( \rho A v dt / m ) ( m v ) = 2 \rho A v^2 \Delta t $$ and we know force is the rate of change of momentum $$ F = \frac{ \Delta p }{ \Delta t } = \rho A v^2 $$ which is correct save a factor of 2 and a drag coefficient which on dimensional grounds should depend only on the characteristic of our body (shape, surface) and the Reynold's number.

Not the answer you're looking for? Browse other questions tagged fluid-dynamics dimensional-analysis flow turbulence scales or ask your own question.

4
What factors determine whether wind resistance will have an important effect?

6
Can a divider “laminarize” turbulent flow and thus reduce friction?
2
What is the difference between 'flow' and 'move'?
1
What is meant by “surge” in fluid mechanics?
1
bubble/drop Reynolds number
1
Is the velocity quantity used to define Reynolds number a scalar or vector?
1
Reynolds No. & Downsizing